CICERO -The Greatest Lawyer Of All Times 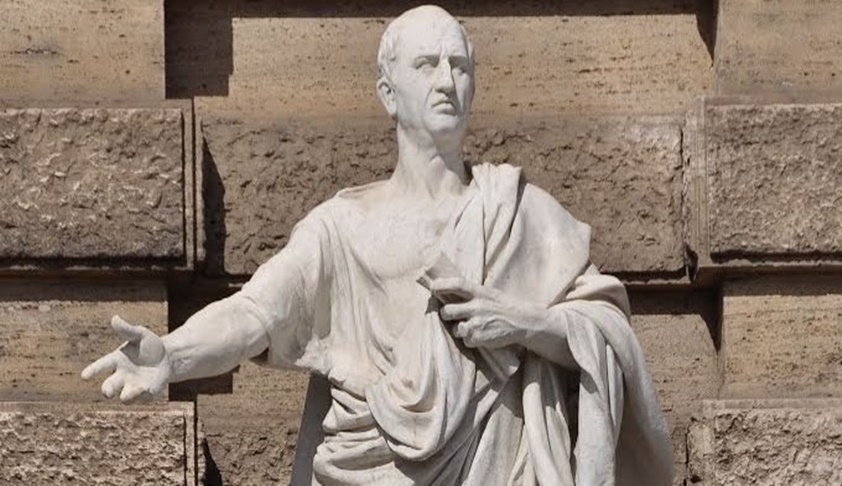 70 years of India’s independence is a mean achievement. The contribution of the lawyers in the independence movement, the framing of our Constitution and ultimately successfully working a democratic constitution has been immense and unparalleled . Perhaps this is the appropriate time to remember the greatest lawyer of all times Marcus Tullius Cicero (106BC –43 BC).Cicero perhaps the...

70 years of India’s independence is a mean achievement. The contribution of the lawyers in the independence movement, the framing of our Constitution and ultimately successfully working a democratic constitution has been immense and unparalleled . Perhaps this is the appropriate time to remember the greatest lawyer of all times Marcus Tullius Cicero (106BC –43 BC).

Cicero perhaps the greatest orator, lived in a time when the Republic, its Senate and its democratic society was under threat by men of war like Julius Caesar, Cataline, Verres, Marc Anthony.  Cicero fearlessly defended the Republic and its institutions as a lawyer, politician, a philosopher and a man of letters for which he ultimately paid with his life.

Born into a family of moderate wealth, Cicero trained himself in oratory, studied Latin, Roman law, Greek philosophy and became a leader of the bar with a lucrative practice. Like every ambitious lawyer he entered politics. His public image and his idealism endeared him to the populace making him winning elections easily. In politics he challenged the most dangerous of men Verres, Cataline and Mark Anthony

A significant turn in his career was the prosecution of Roman Governor of Sicily, Gaius  Verres. .  Legal action was brought by the Sicilians who had suffered under a rapacious rule by Verres. The legal system provided for bringing such a legal action.  The jury  consisted of senators, ex-magistrates and therefore was heavily loaded in favor of Verres. Cicero collected evidence from Sicily and presented his case against the corrupt Roman governor. The speeches against Verres demonstrate astonishing forensic skills admirable  collection and organizing of relevant  evidence of every sort. Verres was found guilty of the plunder of Sicily and exiled from Rome.

The conclusion of the  second speech when he attacks his opposing celebrated lawyer Hortensius, demonstrated his extraordinary oratorical capacities :

“But look at the dilemma of Hortentius. Can he refute the indictment of avarice by praising his client’s thrift? He has to defend a man who is thoroughly dissipated, thoroughly licentious, thoroughly vicious. Can he distract attention from his client’s bad qualities by mentioning any of his virtues? There is no man weaker, more cowardly, more effeminate.  And for his personality, there is no man more obstinate, more impertinent, more arrogant. But these are comparatively harmless aspects of his character.”

After Cicero’s election as a  Consul in 63 BC, an attempt was made to assassinate him and overthrow the Roman republic . The leader of the plot was Cataline whose attempt to get elected had failed on two occasions. He entered into a conspiracy with foreign powers for an armed uprising. Some historians even attribute that Caesar and Crassus were  involved in the plot with Cataline. Cicero’s orations are an all-time classic. In fact parts of the following orations found its way into the Indian Parliament:

“Oh, the depravity of these times! The Senate is informed of his conduct; the Consul has his eyes upon it; yet the man still lives! Lives- why he even walks into the Senate. He participates in the public counsels; he notes down each man of us for the slaughter. And we, brave heroes, fancy we are fulfilling our duty to the state if we merely save ourselves from his furious clutches!……But long ago there was valor in this republic, when brave men punished a vicious citizen more sternly than a ferocious enemy.”

Cataline was found guilty.  He escaped capital punishment on the intervention of Julius Caesar who recommended that the property of the  conspirators be confiscated and they be banished from Rome.

The ides of March, to be precise on March 15, 44 BC, the unexpected happened. Caesar was assassinated. Cicero was never part of the plot which led to the assassination. But he was no admirer of Caesar either.  He considered him an overweening dictator and he feared that with his military might he would overrun the Constitution and the Senate. The assassination brought forth a power struggle in Rome. The main contender was Mark Anthony who had little respect for the Republic or its democratic traditions. Cicero worked towards supporting the leadership of young Octavius Caesar who could bring together the warring factions and preserve the Republic.

Cicero delivered fourteen speeches against Mark Anthony which are called ‘Philippics’. The name ‘Philippics’ was ascribed to his speeches after the famous orations made by Demosthenes to arouse the citizens of Athens against the Conqueror Philip of Macedon. Cicero’s speeches are a full-fledged onslaught against the man who he feared would destroy the Republic. His orations led to declaring Mark Anthony and enemy of the State.

The very first Philippics displayed that there would never be a reconciliation between Cicero and Antony:

“At all events, I have now and shall always have the right to defend my own honour and despise death. As long as I am able to come into the Senate I shall never shrink from the danger of expressing my opinion”

The most damning indictment of Mark Anthony came in the following passage:

“What I really fear is that you do not know the true path to glory, but believe you will win fame by being more powerful than everyone else put together, and prefer being feared by your fellow citizens to being loved. If you really believe that, you are ignorant of the true path. For fame comes from being a loyal citizen, serving the Republic devotedly, earning praise, respect, and love. To be feared and hated is not only an odious and detestable state in itself, but is a sign of weakness and impotence ”

Despite his  efforts, Cicero failed to establish an alliance between Octavius Caesar and Brutus. Mark Anthony, Octavius and Lepidus joined hands to form the  second Triumvirate. After Cicero delivered his 14th and last Philippic,  the battle of Mutina was fought where Brutus was killed. Antony and Octavius three months laterentered Rome with a large armies.   Cicero was declared an enemy of the State despite the persuasions of Octavius. Mark Antony’s henchmen pursued Cicero. On Antony’s instructions they cut off his head and his hands which had penned the ‘Philippics’ against him. His hands were nailed to his head and placed on the Rostra in the Forum Romanum where the great Cicero delivered many of his famous orations.

The historian, Velleius Paterculus paid the most moving tribute:

“When Cicero was beheaded by the crime of Antony, the voice of the people were silenced, for no one raised a hand in defence of the man who for so many years had defended the interests both of the state and  of the private citizen. But you accomplished nothing, Mark Anthony… You took from Cicero a few anxious days, a few ageing years, a life which would have been more wretched under your rule than was his death in your triumvirate. All posterity will admire the speeches that he wrote against you while you’re crime against him will call forth their execrations.”

The real tribute to Cicero was his   substantial written legacy. His several works on philosophy, law, the Constitution came to be recognised in the age of Enlightenment. His works had a deep impact on thinkers and political theorists like John Locke, David Hume, Montesquieu and Edmund Burke. Of the orations of Cicero only 57 of them survive today. He left an indelible ink on Latin language itself. His  Latin impacted European languages up to the 19th-century. His thoughts made way into the Constitution of the United States with its founding fathers, Thomas Jefferson, James Madison and others expressly recognizing his contribution.

Cicero the defender of the Republic, the Senate, the democratic order in  Rome became an emblem and a guiding light not just for Europe  and the new world, but  the world forever searching and in pursuit  of  an enlightened democracy.

Santosh Paul is an Advocate of the Supreme Court of India.