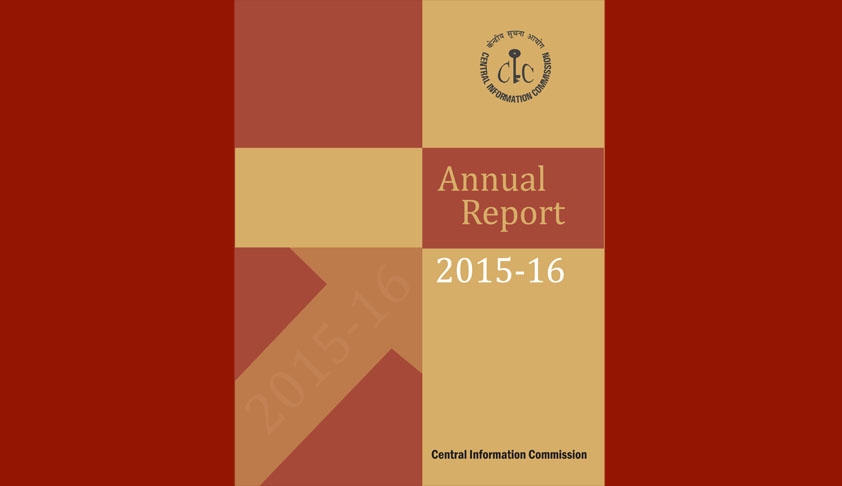 The Central Information Commission has published the Annual Report for 2015-16 regarding the implementation of The Right to Information Act, 2005 (RTI Act). The Annual Report (AR) has come under critical scrutiny in the hands of activists and observers. Here is a summary of trends observed by Venkatesh Nayak of Commonwealth Human Rights Initiative, New Delhi.Central Government- Overall RTI...

The Central Information Commission has published the Annual Report for 2015-16 regarding the implementation of The Right to Information Act, 2005 (RTI Act). The Annual Report (AR) has come under critical scrutiny in the hands of activists and observers. Here is a summary of trends observed by Venkatesh Nayak of Commonwealth Human Rights Initiative, New Delhi.

1) During the reporting year 2015-16 9.76 lakh RTI applications were received by the registered public authorities (PAs). This is 2.21 lakhs or 22.67% more RTI applications received than what was reported during 2014-15. However in 2014-15 almost a quarter of the registered PAs failed to submit their RTI data.. Only 75.27% of the PAs reported their RTI data to the CIC. So the data for 2015-16 indicates that the number of RTIs filed with the PAs in Central Government continues to display a plateauing trend this year as well with no significant hike in the numbers. However the CIC reports that RTI applications have increased by 3.8% in 2015-16 as compared to the previous year.

3) According to the CIC, the highest proportion of RTI applications was rejected not under the permissible exemptions under the RTI Act such as Sections 8, 9, 11 or 24 but under the mysterious category of "others". At 43% rejections recorded under this category, more than 4 out of every 10 RTI applications rejected were for reasons other than those permitted by the RTI Act. The Prime Minister's Office is one of the PAs that employed this device very frequently .

7) The CIC reports that it imposed penalties to the tune of Rs. 10.52 lakhs out of which Rs. 9.41 lakhs was paid up by the PIOs. Penalties worth Rs. 1.25 lakhs imposed in various cases have been stayed by various High Courts.

8) The CIC has reported that the amount of fees and penalties reported by the PAs has increased by 12.31% in 2015-16. However if the amount of penalty imposed is reduced from this figure, the amount of fees collected by various PAs has actually come down from Rs. 1.14 crores in 2014-15 to Rs. 1.07 crores in 2016-17. This trend seems to be at variance with the reduction in the proportion of rejections. This is because, if more people received information then logic dictates that the proportion of fees collected ought to have gone up. This would have to be the case unless the PAs have started the practice of giving information free of charge to RTI applicants. This new trend requires deeper examination.

10) The Ministry of Drinking Water and Sanitation and Ministry Overseas Indian Affairs have not reported their RTI statistics despite registering with the CIC. Only 33% of the public authorities from the Ministry of Road Transport and Highways reported their RTI data to the CIC. However compliance has been between 60-100% in a large number of Ministries and Departments that have registered with the CIC.

1) While the President's Secretariat received only 123 more RTIs in 2015-16 as compared to the previous year the proportion of rejection plummeted from 9.30% to 1.2% in 2015-16. This appears to be a very significant positive trend indicating higher proportion of information disclosure.

2) In 2015-16 the Prime Minister's Office (PMO) reported a rejection rate of 20.10% of the RTIs received. This is a significant drop from 22.10% in 2014-15. However only 7 RTI applications were rejected by the PMO invoking Section 8. A whopping 2,227 RTIs were rejected in the "Others" category. However rejections in this category were much higher at 2,781 in 2014-15. This declining but nevertheless worrisome trend requires in-depth study.

4) While the number of RTIs received by the Comptroller and Auditor General fell to 716 in 2015-16 from 796 the previous year, the proportion of rejection zoomed to 17.2% from 6.3% reported the previous year. This alarming increase requires in-depth study.

5) The proportion of rejection of RTIs by the Election Commission of India has remained at steady state at 0.1% despite receiving 539 fewer RTIs in 2015-16.

7) The Ministry of Personnel and Training reported a significant decline in the proportion of rejections at 3.4% in 2015-16 as compared to 9.4% during the previous year even though it reported receiving 9,000 more RTIs in 2015-16. This appears to be a positive trend.