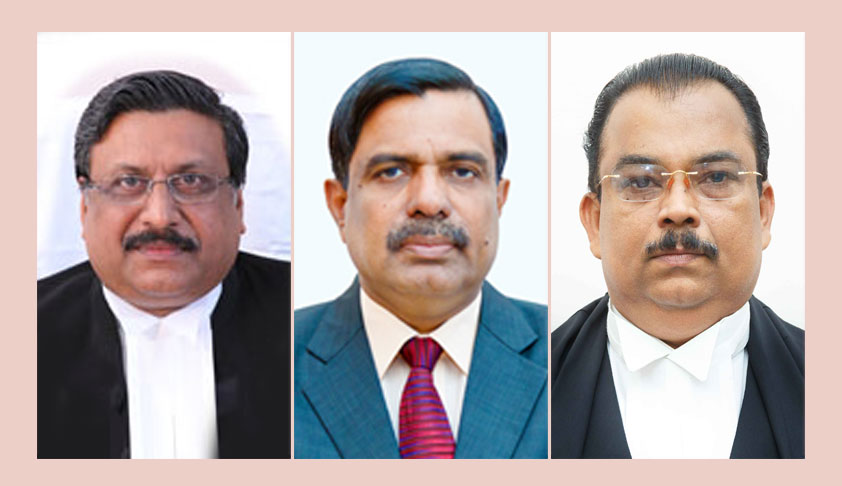 A full bench of the High Court of Kerala has held by 2:1 majority that circulation of high-quality counterfeit currency cannot be regarded as a ‘terrorist act’ as per Section 15 of the Unlawful Activities(Prevention) Act, before 2013 amendment. The full bench was answering a reference made doubting the correctness of a division bench decision in Shereef  v. State of Kerala 2013(4) KLT...

A full bench of the High Court of Kerala has held by 2:1 majority that circulation of high-quality counterfeit currency cannot be regarded as a ‘terrorist act’ as per Section 15 of the Unlawful Activities(Prevention) Act, before 2013 amendment. The full bench was answering a reference made doubting the correctness of a division bench decision in Shereef  v. State of Kerala 2013(4) KLT 60, which had held that circulation of fake currency was a ‘terrorist act’ even as per the un-amended provision.  The majority opinion was rendered by Justice AM Shaffique and Justice P Ubaid, while Justice P Somarajan dissented.

Section 15 of the UAPA defines ‘terrorist activity’. Before 2013, there was no explicit reference to ‘economic security’ or ‘circulation of high-quality counterfeit currency’ in the provision. As per 2013 amendment brought in effect from 01.02.2013, the words ‘economic security’ were inserted before ‘security of India’, and a new sub-section was inserted to deal with a circulation of high-quality counterfeit currency. In the case at hand, the detection of high-quality counterfeit currency was made by customs officials at Cochin International Airport on 26.01.2013 ( i.e., before the amendment came into force), and the 1st accused was arrested. The appellant before the high court was the 3rd accused, who was arrested on 23.12.2016 in New Delhi as a conspirator. The case was transferred to the National Investigation Agency upon incorporation of offences under the amended-UAPA.  The bail application was dismissed by the special court on the ground that offences under the UAPA were involved.  The appellant contended that charges under the UAPA cannot be laid against him as the alleged offence took place before 2013 amendment.

The division bench which was originally considering the appeal doubted the correctness of Shereef  v. State of Kerala, and hence the reference was made to the full bench.

The majority judgment authored by Justice P Ubaid ( for himself and Justice AM Shaffique) considered the impact of Article 20(1) of the Constitution of India, which states that there cannot be a retrospective application for criminal law. The majority view also noted that “economic security” and “circulation of high-quality counterfeit currency” were inserted only in 2013. The statement of objects and reasons of the amendment Act made it clear the amendment was necessitated because the un-amended UAPA was not dealing with counterfeit currency. Applying the principle that plain and literal meaning of the statute should be given effect to, and that penal laws should be strictly construed, the majority view overruled the decision in Shereef. In Shereef,  it was held that fake currency affected financial stability, which affected national security, and proceeded on the basis that ‘security of India’ included ‘economic security’. Shereef also held that finance of the country is included in the term ‘property’ as defined in Section 2(h) of the Act.  It was observed as follows:

The Division Bench has gone too far with an imaginative interpretation to find that the definition of property under Section 2(h) of the U.A (P) Act will cover the finance of the country also. Finance of the country is something different, having broader connotations and applications in the country's economic setup, and it cannot be brought down to a narrow concept or object as property.

So also, the term “security” occurring in Section 15 of the U.A (P) Act cannot be stretched by interpretative process to include economic security. To understand what exactly security is, as meant by the law, the whole section must be read and appreciated carefully. It is quite clear from such interpretation and understanding that the term security meant under the law is the country's security vis-a-vis., law and order situations and internal or external affairs of the country, and not financial or economic fabric. When the parliament in its wisdom realised that economic security of the country also must be brought within the definition of terrorist act, the Parliament inserted the words 'economic security' specifically in Section 15 of the U.A (P) Act by a specific amendment. Though generally the objects and reasons of a statute cannot be given much weight or value or importance in the process of interpretation, the objects and reasons of the Unlawful Activities (Prevention)Amendment) Act, 2012 will clearly indicate that the Parliament inserted words to cover economic security in Section 15 of the U.A (P) Act because the existing provision did not cover such situations or instances of acts like smuggling or circulation of high quality counterfeit Indian paper currency causing damage to the finance of the country and economic stability of the country.

Therefore, the majority view held that provisions of the UAPA cannot be applied against the appellant and that he could be prosecuted only as per provisions of IPC. However, the court did not grant bail to him.

The minority view held by Justice P Somarajan was premised on the reasoning that 2013 amendment to the UAPA was merely ‘clarificatory’, and that circulation of counterfeit currency was even otherwise covered as per the un-amended provisions. It was held that ‘security’ will take under its sweep ‘economic security’. Indian currency is a ‘property’ as per the Act. Since the amendment was clarificatory in nature, there was no question of applicability of Article 20(1) of the Constitution of India, as the offence was already covered under the un-amended provision.

It was observed as under:

Circulation of counterfeit currency printed in a foreign country and smuggling and production of such currency would definitely destructs the financial stability of the nation. Printing of counterfeit currency in large scale and its circulation in India would defeat and destroy the value carried by Indian currency note and it will destruct the financial stability of the nation at large. In other words, it would cause loss of value of the Indian currency, damage to the financial stability of the nation and also destruction of actual value carried by the Indian currency by the circulation of counterfeit paper currency. It amounts to causing damage and destruction of property, being Indian paper currency is a property as defined under Section 2(h) of UA(P) Act.