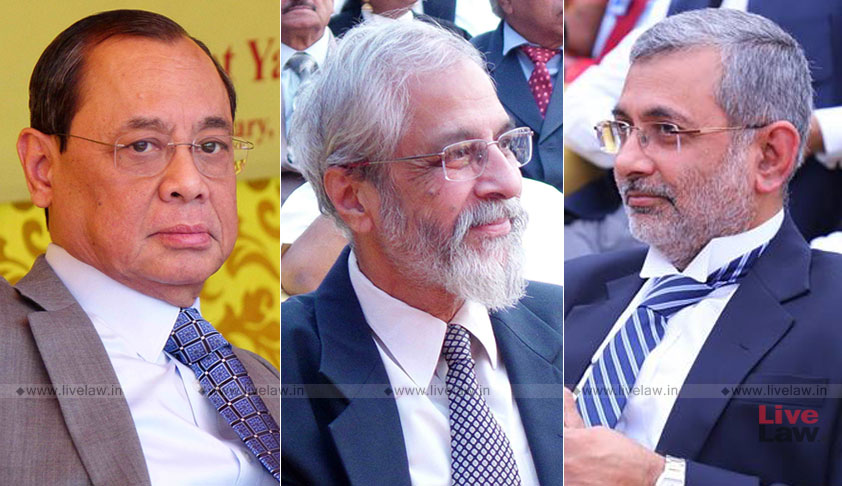 Since assuming office a little over a month ago, Chief Justice of India Ranjan Gogoi has held six crucial collegium meetings for filling up of 29 vacancies in high courts and four in the Supreme Court to tackle the huge backlog of pendency in the higher judiciary.The collegium also did not shy away from invoking provisions of Memorandum of Procedure to appoint a judge of the same high court...

Since assuming office a little over a month ago, Chief Justice of India Ranjan Gogoi has held six crucial collegium meetings for filling up of 29 vacancies in high courts and four in the Supreme Court to tackle the huge backlog of pendency in the higher judiciary.

The collegium also did not shy away from invoking provisions of Memorandum of Procedure to appoint a judge of the same high court as Chief Justice of parent high courts of Bombay and Calcutta.

The CJI Gogoi-led collegium, which also includes justices Madan B Lokur, Kurian Joseph, A K Sikri and S A Bobde, on October 30, recommended elevation of four chief justices of Madhya Pradesh, Patna, Gujarat and Tripura high courts as apex court judges and the names were cleared by the government within 48 hours, creating a history of its kind.

Justice Gogoi had succeeded Justice Dipak Misra as the CJI on October 3 and he will have a tenure till November 17, 2019.

The collegium on October 9, invoked a rarely used provision of Memorandum of Procedure which provides for elevation of a puisne judge as Chief Justice in his own high court if he has one year or less to retire.

Gupta is slated to retire in December 2018 while Patil's tenure ends in April 2019.

The second collegium meeting headed by CJI Gogoi was held on October 24, in which its made seven Gauhati High Court additional judges as permanent judges and elevated three judicial officers for judges of the Madhya Pradesh High Court from the list of five advocates and five judicial officers recommended by the high court collegium on April 11.

On the same day, the collegium also cleared the name of one judicial officer Suvra Ghosh as judge of the Calcutta High Court while deferring the proposal for elevation of another officer Rabindranath Samanta.

The collegium, which also comprised justices Lokur and Joseph on the same day also recommended Lalit Batra and Arun Kumar Tyagi, both judicial officers, as judges of the Punjab and Haryana High Court, while it did not cleared the name of judicial officers Neena Chaudhary and Bidhu Bhushan Pathak and remitted back the proposal to the Chief Justices of the Punjab and Haryana and Bihar High Courts respectively.

In its third meeting, on October 29, the collegium comprising CJI, justices Lokur Joseph, Sikri and Bobde effected the transfer of 11 judges from one high court to other.

The recommendation was cleared by the government in just 48 hours and the four judges were sworn in on November 2, as apex court judges.

On October 31, in its fifth meeting meeting, the collegium headed by the CJI, cleared the names of 13-judicial officers as the judges of Allahabad High Court, which had a vacancy of 76 judges as against the sanctioned strength of 160 judges.

On the same day, it also cleared one name of judicial officer Akshaya Kumar Mishra as judge of the Orissa High Court and three judicial officers--Narayan Singh Dhanik, Ramesh Chandra Khulbe, and Ravindra Maithani as judges of Uttarakhand High Court.

The apex court collegium on the same day also remitted as many as six out of the eight names sent to it for appointment as judges of the Orissa High Court, where judicial work has been hit by lawyers' strike since August end.