CJI's Impeachment: Medical College Bribery Case, Allotment Of Matters And More, Here Are The Allegations In The Motion 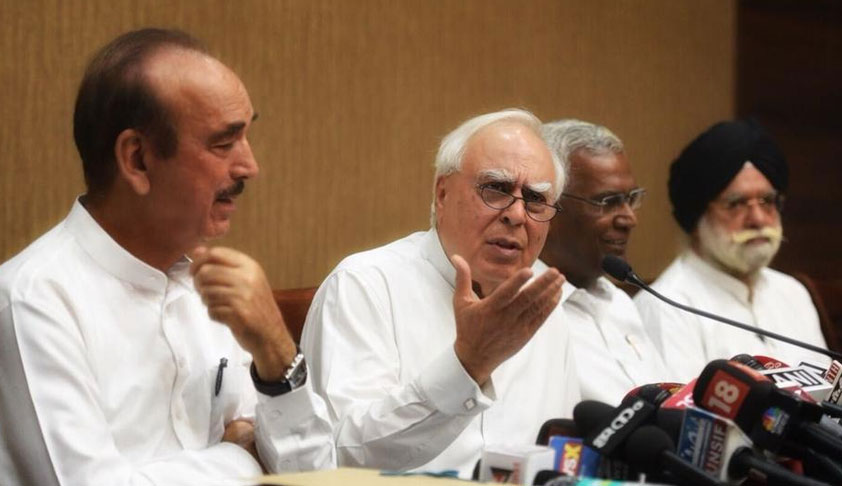 The following charges have been listed for initiating the proceedings:

The draft raises questions on the manner in which Prasad Education Trust case was dealt with by the CJI, pointing out that a Bench headed by him had directed the Government to consider afresh the available materials pertaining to the grant of letter of permission to it.

It may be recalled here that a charge-sheet filed by the CBI against former High Court Judge, Justice I.M. Quddusi had opened a can of worms in the later part of last year, giving birth to what came to be known as the medical college bribery case.

As per the FIR, Mr. Quddusi allegedly conspired with one Ms. Bhawana Pandey to “settle” the matter concerning debarment of Prasad Institute of Medical Science, Lucknow, which is one of the 46 colleges barred by the Government. It reveals that Mr. B.P. Yadav, who manages affairs of the medical institute, got in touch with Mr. Quddusi and Ms. Pandey and “entered into criminal conspiracy for getting the matter settled”.

Mr. Quddusi had allegedly advised Mr. Yadav to withdraw his challenge to the debarment from the Apex Court and approach the Allahabad High Court instead. The High Court had then granted an interim stay against the debarment. While the Medical Council of India had approached the Supreme Court against this order, Mr. Quddusi and Ms. Pandey had allegedly assured Mr. Yadav that they will “get the matter settled in the Apex Court through their contacts”.

It then came to light that the relevant cases concerning the colleges were being heard by a Bench headed by the CJI himself, thereby landing him in the soup.

The draft relies on the Code of Conduct titled 'Restatement of Values of Judicial Life' formulated in a Conference of all Chief Justices in the Country in 1997. It quotes the very first code, which says,

"Justice must not merely be done but it must also be seen to be done. The behavior and conduct of members of the higher judiciary must reaffirm the people's faith in the impartiality of the judiciary, whether in official or personal capacity."

The manner in which the CJI dealt with the Petitions filed by Advocate Kamini Jaiswal and the CJAR, it says, "clearly violates" this Code of Conduct. The two Petitions had been filed demanding an independent probe into allegations of corruption in the higher judiciary.

To this end, it refers to the unprecedented drama fuelled at the Supreme Court in November last year, with the Court annulling an order passed by a two-Judge Bench, after a rather forthright confrontation between the CJI and Advocate Prashant Bhushan.

The draft points out that after Justice J. Chelameswar agreed to hear Ms. Kamini Jaiswal's Petition seeking an investigation into the medical college bribery case, a note from the Registry was taken on record. It alleges that while the note is purportedly dated 6 November, 2017, it appears to have been antedated and prepared only on 9 November.

If this note was indeed issued on 6th November 2017, why was it not communicated to Court No. 2 which has to hear the urgent mentionings while the Chief Justice of India was sitting in the Constitution Bench?  Why was it only communicated in a hurry while the hearing of Mrs. Kamini Jaiswal’s petition was in progress?”

The draft alleges that CJI Misra had given a false affidavit in 1999 while applying for allotment of agricultural land by the Government. While this allotment was cancelled by the Additional District Magistrate, Cuttack, it alleges that Justice Misra did not surrender the possession of the plot and the record of rights was corrected only in January, 2012, a year after he was elevated to the Supreme Court.

A CBI investigation has been ordered by the Orissa High Court into such illegal land allotments. The matter is, however, still pending before the High Court.

The draft alleges that Justice Mira has "abused his authority as master of roster and exercised this power in a malafide and arbitrary manner". It goes on to allege that the CJI had directed the registry to place before him cases filed by particular advocates, and states,

"Though the Chief Justice of India is the master of roster and has the administrative authority to determine benches to hear cases, it does not mean that such power can be exercised in an arbitrary or malafide manner or to the exclusion of senior judges in sensitive cases."

This issue had been raised by four sitting Judges of the Supreme Court – Justice J. Chelameswar, Justice Ranjan Gogoi, Justice M.B. Lokur and Justice Kurian Joseph – in a letter written to the CJI two months before they held a press conference asserting that the administration of the Apex Court is "not in order" and that many "things less than desirable" have been happening in the last few months.

While acknowledging that the CJI is the master of the roster, the letter had said that this is "not a recognition of any superior authority, legal or factual of the Chief Justice over his colleagues". It had then stated that while there are well-settled conventions guiding the Chief Justice in the task, off late such conventions have not been strictly adhered to.

The Judges had further written, "There have been instances where case having far-reaching consequences for the Nation and the institution had been assigned by the Chief Justice of this Court selectively to the benches "of their preference" without any rationale basis for such assignment. This must be guarded against at all costs.

We are not mentioning details only to avoid embarrassing the institution but note that such departure have already damaged the image of this institution to some extent."