CJI’s Power As The Master Of The Roster Is Subject To The Caveat That This Power Is Exercised Fairly: Dave, Sibal Argues Shanti Bhushan’s Plea 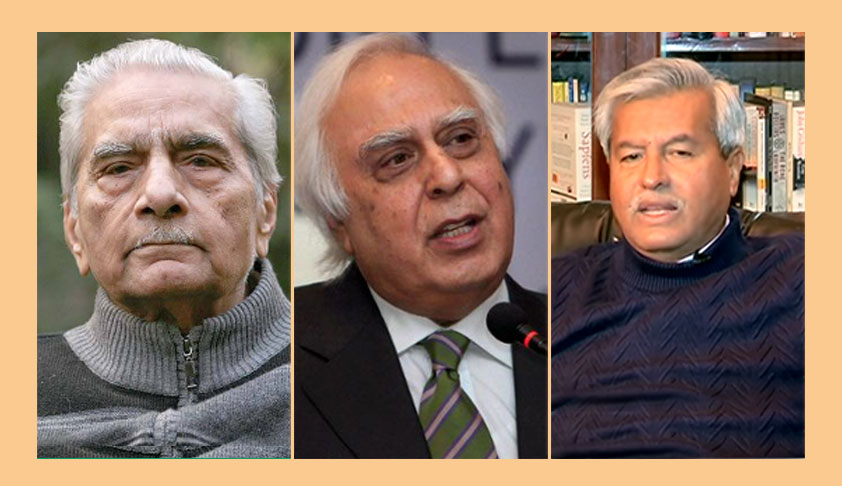 The Supreme Court bench of Justices A. K. Sikri and Ashok Bhushan on Friday requested the assistance of the Attorney General in respect of the writ petition filed by Former Union Law Minister and Senior Counsel Shanti Bhushan seeking clarification of administrative authority of the Chief Justice of India as the ‘master of the roster’.“You are praying that any reference to...

The Supreme Court bench of Justices A. K. Sikri and Ashok Bhushan on Friday requested the assistance of the Attorney General in respect of the writ petition filed by Former Union Law Minister and Senior Counsel Shanti Bhushan seeking clarification of administrative authority of the Chief Justice of India as the ‘master of the roster’.

“You are praying that any reference to the ‘Chief Justice of India’ must be deemed to mean a collegium of 5 senior judges of the apex court (in respect of the exercise of administrative powers by the Chief Justice)?”, inquired Justice Sikri.

“Yes, the Supreme Court Rules framed under Article 145 as well as the Protocol of this court are being violated so far as the assignment of cases is concerned...it is the constitutional principle that nobody, regardless of rank or status, is above the law...”, responded Senior Counsel Dushyant Dave, citing “malice of law”.

“Malice of law cannot be advanced as a ground for seeking the relief that any reference to ‘CJI’ should be understood to mean the collegium”, remarked Justice Bhushan.

“It is a point of law...the ‘CJI’ is implied as including the senior most judges of the Supreme Court in matters of transfers and appointments...”, asserted Mr. Dave, relying on Article 124.

“There are hundreds of cases filed before the Supreme Court on a daily basis...it is not feasible to have the collegium sit twice or thrice a week to oversee the assignment of these matters...”, noted Justice Sikri.

Indicating Order 3 Rule 7 of the Supreme Court Rules of 2013, in so far as the Rule stipulates ‘Subject to general or special orders of Chief Justice, the Registrar shall publish such other lists as may be directed; list matters as may be directed and in such order as may be’, Mr. Dave advanced, “in so far as the preparation of the terminal lists is concerned, it is an automatic procedure; there is no power of the CJI in respect thereof...our concern arises in respect of matters wherefore the Registry seeks directions of the CJI...the CJI does not exercise this power in respect of thousands of cases, as once the roster is finalized, all matters are accordingly listed...our concern is in respect of the special matters of sensitive nature, like those which may have an impact on the survival of democracy, in behalf of the listing of which the CJI exercises discretionary power...it is a settled position that in a Democracy, there is no concept of an absolute discretion...any such power is always subject to checks and balances...”

“Which matter can be deemed as being ‘sensitive’ is a subjective notion”, remarked Justice Bhushan.

“Then why are certain matters listed before specific benches...we have mentioned 14 such instances in the petition in regard to which the Registry has some serious questions to answer...”, responded Mr. Dave.

Indicating the plea by NGO Common Cause challenging the appointment of IPS officer Rakesh Asthana as the CBI Special Director, he advanced, “the matter had first come up before a bench of Justices Ranjan Gogoi and Navin Sinha...after Justice Sinha recused therefrom, it is the rule that it should have been placed before another bench presided over by Justice Gogoi...but the matter was listed before the bench of Justices R. K. Agrawal and A. M. Sapre in contravention of the Supreme Court Handbook on Practice and Procedure...”

When Justice Sikri sought to remark that upon recusal of Justice Sinha, the settled rules required the matter to be placed before the CJI, Senior Counsel Kapil Sibal intervened, “if the combination of the bench changes, then there is no such need...on the day when the matter was listed before Justices Agrawal and Sapre, Justice Sinha was not sitting with Justice Gogoi...”

“If there was any such intention, then the matter would not have been listed before Justice Gogoi in the first place...”, observed Justice Sikri. “The matter had been so marked by Court no. 2 (presided over by Justice Chelameswar)...it is the rule that when the CJI is sitting in a constitution bench, matters shall be mentioned before the second senior most judge...”, responded Mr. Dave.

In this regard, he also cited the instance of the petitions by the CJAR and Advocate Kamini Jaiswal in the Prasad Educational Trust matter.

“There is no dispute that the CJI is the master of the roster...how this power may be exercised is the issue...but prima facie, the ‘CJI’ cannot be deemed to mean the collegium...”, remarked Justice Sikri.

“The Chief Justice’s power as the master of the roster is subject to the caveat that this power is exercised fairly...”, replied Mr. Dave, mentioning the 1981 S. P. Gupta judgement (First Judges Case).

Mr. Dave, on Friday, also mentioned the instance wherein a former CJI, having held office for only two weeks, had listed business matters before himself, the orders wherein were reviewed subsequent to his retirement.

“Your solution to the problem of the exercise of power is not feasible...what is needed is a self-governing mechanism...”, noted Justice Sikri.

“We have been in this court for 40-50 years...we are not against any specific individual...but were are troubled...”, advanced Mr. Sibal.

“When Dr. B. R. Ambedkar was asked which Article of the Constitution he would regard as its heart and soul, he had put his finger on Article 32...this court is the bedrock of constitutional values...it is Your Lordships bounden duty under Article 32 that justice is seen to be done”, added Mr. Dave.

“I have always said that a bigger role of a judge than administration of justice is to uphold the constitution”, agreed Justice Sikri.

In response to the bench’s expression of a doubt as to whether the issues at hand could be addressed on the judicial side, Mr. Sibal exclaimed, “If this issue is to be decided internally, then what is the recourse if any appropriate procedure is not devised? This would be the only order which cannot be challenged...Judicially, Your Lordships say it cannot be decided...Administratively, the power is in the hands of one individual...this will be the only order without any challenge!”

When Justice Sikri remarked that there are several Supreme Court judgments that the CJI shall be the master of the roster, Mr. Dave responded, “and I shall prove that they are in our favour”.

Thereupon, he quoted from the recent judgment delivered on a similar petition filed by Advocate Asok Pande- “...The ultimate purpose behind the entrustment of authority to the Chief Justice is to ensure that the Supreme Court is able to fulfill and discharge the constitutional obligations which govern and provide the rationale for its existence. The entrustment of functions to the Chief Justice as the head of the institution, is with the purpose of securing the position of the Supreme Court as an independent safeguard for the preservation of personal liberty...”

Mr. Dave claimed that that position of the apex court ‘as an independent safeguard for the preservation of personal liberty’ has been compromised.

He sought to refer to the concerns voiced by the four senior most judges of the Supreme Court at the January 12 press conference to vehemently urge the court to take judicial notice, however, the bench refused to be addressed thereon, scheduling the matter for further hearing on April 27.