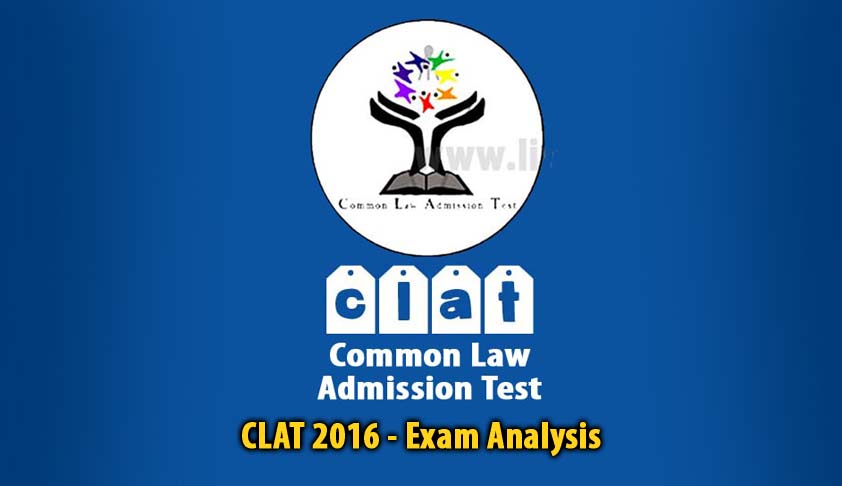 The Common Law Admission Test- 2016 was conducted by RGNUL, Patiala on 8th of May from 3 PM- 5 PM. As per the students CLAT 2016 was quite easy, perhaps easiest of all the previous CLAT papers. RGNUL ensured that the registration process was smooth and hassle free and included specific time period for representation relating to the answer key. This has been done for the first time....

The Common Law Admission Test- 2016 was conducted by RGNUL, Patiala on 8th of May from 3 PM- 5 PM. As per the students CLAT 2016 was quite easy, perhaps easiest of all the previous CLAT papers. RGNUL ensured that the registration process was smooth and hassle free and included specific time period for representation relating to the answer key. This has been done for the first time. The enforcement of the BCI notification by the Courts has ensured that, there was no age limit this year as well.

The difficulty level was easy to moderate. 90% questions mostly followed the mainstream current affairs news only. Those students, who did follow the newspapers would have performed very well in this section and would be fairly comfortable while solving this section. Most of the questions were easy and direct. The following questions came in the CLAT 2016 paper (memory based):

A good attempt in this section would be around 46 questions with a net score around 42.

Anirudh Vijay, whose CLAT center was in Jaipur, stated that, “Major portion was from Current Affairs of 2016, in fact a question was asked about the Uttarakhand Issue of 6th May!” Anirudh attempted around 160 questions.

Shashank Suresh, whose center was in Gaziabad and attempted 186 shared that, ‘The questions were a mix from contracts, torts and criminal law. The options given were pretty basic too so as to not confuse the students.’

Legal GK was pretty basic and the questions that were asked included 100th Amendment, 99th amendment, chairman of Niti Aayog.

This section was a bit tougher than the other sections and difficulty level would be moderate. There were questions on Statement Assumption, Cause and Effect, Analogy, Odd Word Out, Syllogism, Logical consistency.

Parv Kaushik, who took his paper in Gaziabad and attempted 192 questions, expressed that, “Logic was moderate. it had quite a lot of critical reasoning, statement assumption and cause and effect.The series was also easy. the only reason I would call it moderate and not easy was because of the dominance of critical, because one cant be 100% sure of the answer in them.”

There was one question on visual reasoning as well wherein there were a set of four squares with a pattern, we had to guess the fifth, though the official syllabus has specifically excluded that. Those who practiced from the past papers, would have find this section easy. An attempt of 33- 35 questions and an overall score of around 30 would be good.

One question which definitely created confusion in the mind of the students is, “Choose the odd one out

Many students felt that English was the easiest section of all. There was a passage comprising of 10 questions, Idioms, Spellings and Vocab based questions. Meanings of words such as accomplished, endorsement, Pedagogy, ab initio, alibi, persona non grata were asked. There were no surprises this time and the questions were very easy. This was the easiest section. An ideal attempt in this section would be 36- 38 and with a net score of 33- 36.

This section was tricky and lengthiest of all. Questions were from Simple Interest, Ratio, Percentage, Probability, Averages, Profit and Loss, Clocks, etc. Attempt should have been around 12- 14, with a score of around 10.

Nevertheless, this paper was a breeze of fresh air after the CLAT 2015 paper. Almost everyone was happy after the exam. Considering the paper, an attempt of around questions would be good. The paper with the answer key would be released on 12th May.

Mohit Diwakar is a law student at NUJS who mentors CLAT aspirants through his Facebook Forum CLATHead.