CLAT 2016 Notification is out 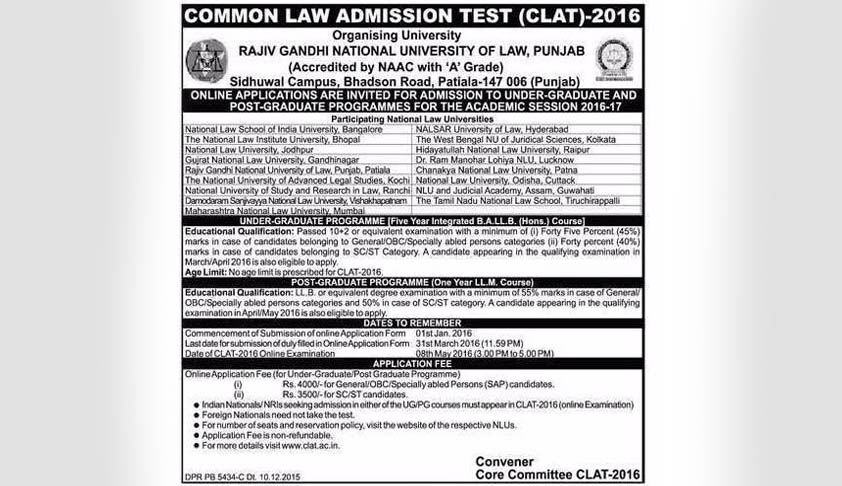 The date for Common Law Admission Test (CLAT), 2016 to be conducted by Rajiv Gandhi National University of Law, Patiala is announced. According to CLAT 2016 Notification, the exam will be conducted on 8th May, 2016. The registrations for the same will begin from 1st January, 2016.

As per the CLAT 2016 Notification, the exam is held for admissions to 17 national law universities. Notably, CLAT is conducted for taking admissions to five years integrated Bachelor of Arts and Bachelor of Law (BA LLB) Honours and one year Master of Law (LL.M) programme for the academic session 2016-17.

Educational Qualifications as per the CLAT 2016 Notification

The candidates must have passed Class 12th or its equivalent examination (students appearing can also apply) from the government recognized board with not less than 45 percent marks (40 percent in case of SC and ST candidates) as prescribed by the participating universities. Interestingly, there is no age limit now.

The candidates must have completed 5 year integrated LLB programme or its equivalent degree with not less than 55 percent marks (50 percent in case of SC and ST candidates) from a recognized university as prescribed by the participating universities.

The allotment of institutions and seats would be based on the scores in CLAT 2016 merit-list and the options by candidates and availability of seat in the desired university.

The online registrations will begin from 1st January, 2016.