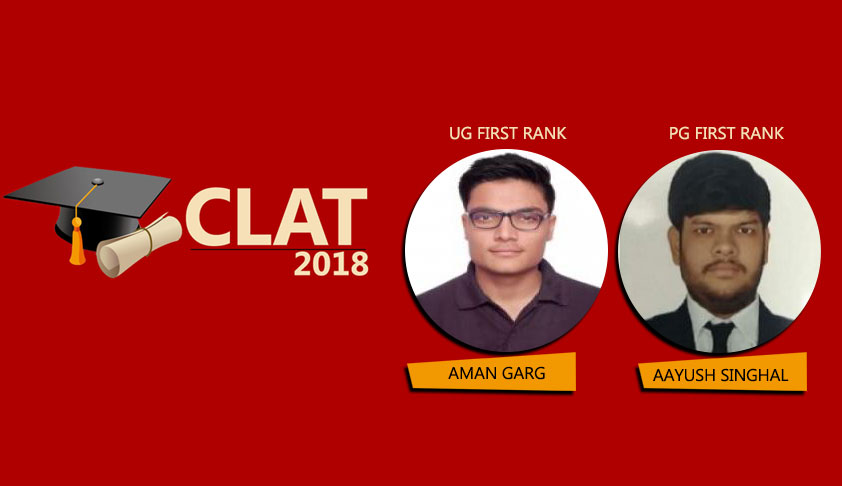 After being embroiled in controversy for widespread technical glitches for a month, the results of the Common Law Admission Test (CLAT) 2018 were published on May 31. You may access the results here.As per a TOI Report, the first four positions for the Undergraduate programs were secured by students from Rajasthan- Aman Garg, Devansh Kaushik, Anmol Gupta, and Gunjan Jadeja. Garg scored 159...

After being embroiled in controversy for widespread technical glitches for a month, the results of the Common Law Admission Test (CLAT) 2018 were published on May 31. You may access the results here.

As per a TOI Report, the first four positions for the Undergraduate programs were secured by students from Rajasthan- Aman Garg, Devansh Kaushik, Anmol Gupta, and Gunjan Jadeja. Garg scored 159 marks out of 200 while Kaushik and Gupta secured 157.5 marks each.

While the first three toppers are from Jodhpur and had studied together in the same batch, the fourth one is from Jaipur. The first rank for the Postgraduate courses was secured by Aayush Singhal, who also hails from Jodhpur.

The technical glitches and lawsuits

The results were announced after a Supreme Court Bench comprising Justice L. Nageswara Rao and Justice M.M. Shantanagoudar on Wednesday refused to stay the publication of the results, directing the Grievance Redressal Committee established by NUALS, Kochi to submit its report to it by June 6. The Bench had also made it clear that the exam cannot be cancelled.

The Grievance Redressal Committee was set up in view of the Supreme Court order issued on 25 May for effective redressal of the grievances put forth by scores of candidates who appeared for the exam this year. The Committee is chaired by former Kerala High Court Judge, Justice Hariharan Nair, and also comprises of Dr. Santhosh Kumar G., Professor and Head, Department of Computer Science, Cochin University of Science and Technology.

Notably, the Petition also highlights the fact that neither have the students' representations been acknowledged by the authorities, nor has an expert committee been appointed to look into the issues. Addressing this concern, the Supreme Court had suggested setting up of a nodal agency to examine the grievances of candidates on a case to case basis and offer redressal.

Thereafter, 29 more law aspirants had moved the Apex Court on 29 May, praying for a retest, and reiterating the grounds of technical glitches and gross mismanagement. However, with the results now having been announced, it is for the Grievance Redressal Committee to adequately address the issues flagged by the students.