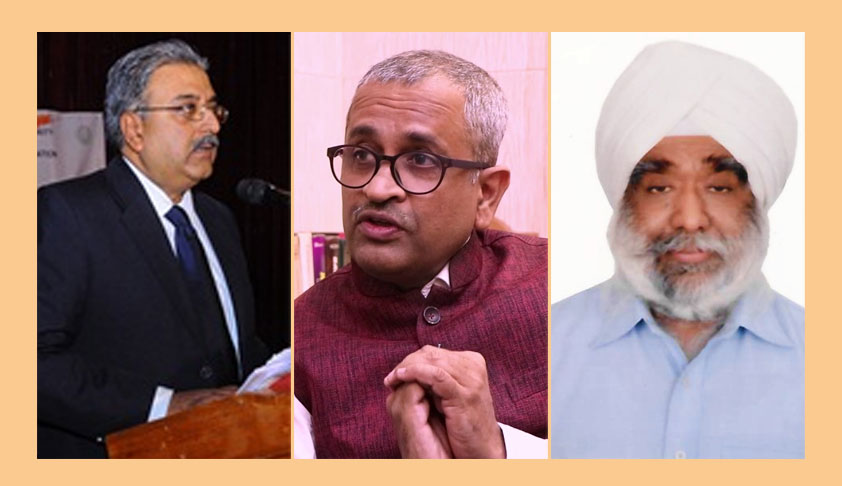 The Supreme Court on Monday directed the SC appointed Grievance Redressal Committee in respect of CLAT-2018 to to complete addressing the grievances by June 15.The bench also noted that the first round of counselling, which commenced yesterday, shall proceed and that the court shall not disturb the admissions so made, unless the University chooses to deem such seat allocation...

The Supreme Court on Monday directed the SC appointed Grievance Redressal Committee in respect of CLAT-2018 to to complete addressing the grievances by June 15.

The bench also noted that the first round of counselling, which commenced yesterday, shall proceed and that the court shall not disturb the admissions so made, unless the University chooses to deem such seat allocation as provisional.

However, the bench conceded to pass a direction to the effect that a candidate whose score improves upon the administration of the compensatory formula devised and who is then entitled for admission to a better law school shall not lose the fee deposited with the earlier institution.

Most importantly, the bench categorically rejected the pleas for a re-examination.

The detailed order shall be passed on Wednesday.

On Monday, Senior Counsel V. Giri, appearing on behalf of NUALS, drew the attention of the bench to the report of the Committee pertaining to 4,689 complaints received, “To address the genuine grievances, two courses of action are open- one, being, the cancellation and retest, which the Committee does not approve, and second, of compensating for any loss of time on account of re-login... the Committee has no capacity to suggest a compensatory formula for the same...”

Throwing light on the solution suggested by the Committee in the form of supernumerary ranks, Mr. Giri continued, “When the merit list is redrawn after such compensation, the existing ranks may not be affected and the candidates receiving the same marks as another student achieving, say Rank 51, shall be accorded such ranks as 51A, 51B and so on...”

Moving on to discuss the compensatory formula, he advanced, “we have applied the formula suggested by a team of statisticians in respect of candidates in whose case the GRC noted a deficiency based on the audit reports...for instance, in the case of writ petitioner Animesh Shukla, the exam was taken in 7000 seconds and the notional time loss as per the audit report is 538 seconds. The total number of questions attempted is 172, the number of questions answered correctly is 125 and the score is 113. Based on the answering efficiency so derived, projections have been made as to the number of questions that could have been attempted and those that may have been correctly or wrongly answered and the score has been revised...”

“So you are calculating the time taken to answer one question based on how many questions were attempted in the total time taken...then you are going as per the normative capacity to answer correctly as well as the inadequacy of answering wrongly to award compensatory marks...”, repeated the bench.

When the bench inquired as to the time sought for addressing all representations, Mr. Giri replied, “over 400 instances where loss of time was alleged have been dealt with...the time is spent in not just analysing the complaints but examining the audit report to ascertain if there was any loss of time...please give us time till the 15th...”

“So till the 15th, the first counselling will have concluded and we shall have a picture as to many seats are vacant...”, remarked the bench.

“But suppose a student with rank 115 gets admitted to NLU, Jodhpur. Upon revision of marks, certain other candidates may also acquire ranks 115A, 115B, 115C and so on...to avoid any heartburn, Your Lordships’ orders will be needed to create the additional seats as there is no statutory provision in this regard...”, prayed Mr. Giri.

“We will not resort to this unless we are driven to...say, NLSUI, Bangalore admits 60-80 students and after the first counselling, 5 seats remain, then the second merit list shall proceed normally, there being no displacement...”, observed the bench.

The bench was informed that in the counselling that commenced yesterday, the choices were entertained online and the allocations made.

In his turn, Senior Counsel Sanjay Hegde, representing the petitioners, sought to submit, “only 10% of the students who sat for the examination have complained...[‘We shall stick to the May 27 deadline in this regard’, noted the bench]...”

“The question is whether something so radically went wrong that it cannot be accepted or if what went wrong can be reformed...in such instances of leakages pertaining to medical colleges, this court has held...[Cutting through, the bench said, ‘there has been no leakage. There is only loss of time’]...I concede there is no leakage...the complaints have been categorised by the Committee in certain heads- frequent login failures, undue extension of time and deliberate cheating by closure of browser...”, he continued.

When the bench objected to expanding the scope of the matter, he indicated the averments in one of the writ petitions- “when the computers froze and defroze, two options appeared- ‘start’ and ‘restart’...’restart’ enabled the candidates to attempt the question paper afresh with the timer set again at 2 hours...certain unscrupulous candidates could accordingly evade negative marking by attempting the same questions a second time...”

“The Committee only deals with the loss of time and not the allegations of mass copying...the CCTV footage of the exam centres has not been viewed by the Committee...they have only perused the audit report prepared by Sify, which is a first-timer, the earlier service provider deliberately having abstained from bidding...”, submitted Mr. Hegde.

Seeing merit in his contention regarding the closure of browser, the bench asked him to suggest a solution. “These are our children coming into our profession...even a drop of poison in a glass of milk is poison...in 2009 also there were allegations of CLAT having gone wrong and then a fresh exam was conducted...the same thing can be done this time at no additional expense...”, replied Mr. Hegde.

“You are speaking for these 4,000 candidates...what about the others who did not lose even one minute? The scale is anyway titled more towards these 4,000, considering it is the tendency to first attempt those questions the answers to which one is certain about... the questions that they have not attempted may be the ones they did not know...”, opined the bench.

Thereupon, Mr. Hegde placed reliance on the 2015 judgment in Tanvi Sarwal v. CBSE wherein the apex court had directed the reconduct of the All India Pre Medical Test on the grounds of engagement in unfair means. “When something is done malafidely and deliberately, that stands on a different ground from a mistake caused by incompetence which can be compensated by a formula...the purity of the examination process has not been compromised in this case”, distinguished the bench.

When a counsel for the petitioners sought to indicate videos of instances of cheating on YouTube, the bench asserted that it shall not question the purity of the process and that there shall be no retest for even the aggrieved candidates.

“One candidate lost 553 seconds and still attempted 172 questions, while you lost 2 minutes and answered only 150...you are questioning the correctness of the statistics as to whether you lost 2 minutes or 10 minutes...we cannot get into this...we have to accept something somewhere, otherwise this will be an endless process”, said the bench to another advocate.

Advocate Zoheb Hossain cited the alleged anomalies in certain questions including, inter alia, one requiring the students to adjudge which of 4 candidates of given attributes is best suited for appointment as a judge, and another as to the number of languages in the Eighth Schedule.

In respect of the former, the bench remarked, “if you rule out the person described as impatient and the other being actively involved in politics, the answer is justified”. As for the latter question, the bench noted that the mistake has been acknowledged and corrected.

Mr. Hossain also sought to prove that the invitation to tender restrained service providers with a back record of mismanagement from participating, hence, questioning the selection of M/S Sify.

Upon the insistence of the bench, he proceeded to indicate allegations in certain writ petitions in respect of cheating in exam centres in Hissar, Haryana. He prayed that the Committee view the video footage of the centres and also, that a reexamination may be conducted for the 6,000 aggrieved candidates. Refuting the plea for retest, the bench noted that there cannot be different parameters for judging different groups of students.

The bench, on Monday, also prompted ASG Maninder Singh to suggest measures so as to avert such unfortunate episodes in the future. “You cannot be a passive observer”, said the bench to Mr. Giri and the ASG.

“The solution is the autonomy of the institution...these colleges conduct CLAT on a rotational basis...”, responded Mr. Singh.

He had objected to any provision of additional seats on account of supernumerary ranks, stating that the same would require the involvement of the BCI. He had also suggested that the counselling be effected after the normative formula has been administered to the aggrieved candidates; that the seat allocation be provisional so that after the scores of the candidates have been revised, they may be dealt with in the first round.

He had objected to any provision of additional seats on account of supernumerary ranks, stating that the same would require the involvement of the BCI. He had also suggested that the counselling be effected after the normative formula has been administered to the aggrieved candidates; that the seat allocation be provisional so that after the scores of the candidates have been revised, they may be dealt with in the first round.

Stating that the comprehensive order in this regard shall be passed on Wednesday, the vacation bench of Justices U. U. Lalit and Deepak Gupta allowed the redressal to proceed on the aforementioned formula.