A Comic Tale Of The Gown 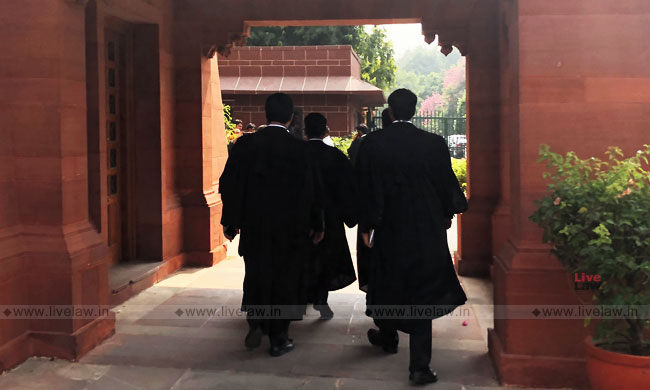 Intimidating for some, penguinesque for others. Stuffy for the ones wearing it when the weather application tells us we are being slow roasted. For High Courts and the Supreme Court in India, like in many other countries, the lawyers' and judges' dress code consists of white (more or less) clothing topped with a white band, a black coat and a black gown (the last two turn a bit swanky...

Intimidating for some, penguinesque for others. Stuffy for the ones wearing it when the weather application tells us we are being slow roasted. For High Courts and the Supreme Court in India, like in many other countries, the lawyers' and judges' dress code consists of white (more or less) clothing topped with a white band, a black coat and a black gown (the last two turn a bit swanky if you're admitted into the League of Extraordinary Legal Gentlemen, the senior advocates and the judges, but still remain boring black). An unimaginative colour combination – black and white – and hardly the combination for the champions of the philosophy "nothing is ever black or white".

While there is no perfectly accurate account of the origins of the gown, we are informed that what we wear as lawyers and judges has its foundation in medieval England (where else?). Well then, it seems the Bar and the Bench had centuries to evolve, but have remained medieval.

But wait, those medieval British chaps were more vibrant than us. A long robe, a full hood with a cowl covering the shoulders and a mantle or cloak was the correct dress for judges attending the royal court during the reign of King Edward III (1327-77), and the colours of the judges' dress then were violet for winter, green for summer and scarlet for ceremonial occasions. Well, well!

And since Edward III finds place in this tale, did you know he was crowned at age fourteen after his father Edward II was deposed (and later murdered they say) by his mother Queen Isabella, who was French, and her lover Roger Mortimer? But that's another story.

Back to the colours of our calling.

Where did they go wrong? Violet, green and scarlet to black and white! Did someone prefer crows to peacocks and macaws?

It seems not much happened for a long time, except the shifting of dynasties, the turmoil of those times and the fading away of green robes. And while Good Queen Bess, who ruled for a whopping 44 years until 1603, may have thrown her weight around generally, she knew better than to de-colour her judges, and so did her successor.

But, in 1635, during the reign of Charles I, the English decided (like they almost always do, eventually) that it was time to put the judges' fashion rules in black and white (no pun intended) and so, they came out with a definitive guide called "What Judges Are Wearing This Season" (Just joking, this dreary set of rules came to be known as the Judges' Rules, 1635). Thenceforward, those unfortunate judges had to wear black robes in winter and could only indulge in a display of colours in summer with violet or scarlet robes. And that's how the 'crow in winter' business officially began.

Another salacious piece of information at this stage – Charles I has the dubious distinction of being a King tried, convicted and executed for high treason against his own country, and at the end of his reign, for a brief period, England became a republic. Now while no one has ever claimed that the 'crow in winter' imposition had anything to do with it, but who is to say what darkness might also have been weighing in the minds of judges? For, coincidentally, it was the winter month of January when it all transpired.

And then we are told that even judges don't follow rules. Hmph! Some two hundred years later, the seasonal change of colour had gone out of vogue and the criminal chaps (oops, I meant the judges trying criminal cases) were wearing scarlet robes and the civil chaps (pun intended) had turned into uncivil crows by wearing black gowns. Sometime during this period, the band couture was introduced too, which became the hot thing and replaced the Elizabethan ruffs.

Now, don't even try to decipher what happened next. All that we need to appreciate is that the British take their judges' outfits as seriously as their system of law and so, over time, as some courts amalgamated and new courts were created, they made it a point to create codes for the ensembles for all manner of court birds – black, violet, red, and even different coloured tabs to indicate the status of the wearer – the range is wide.

That's so far as that side is concerned. Now for this side.

We are informed that, since the 14th century, barristers, supposedly being men of learning, also wore robes that bore strong similarities to the judges' robes, and just like the judges back then, they too wore bright colours – green for summer, violet for winter and red for special occasions. Somewhere down the line, black gowns gained popularity, as the Inns of Court started governing costume. Now, this is the strange part – it is said that following the death of the 'Merry Monarch' Charles II in 1685, the Bar entered mourning and one and all started wearing black mourning robes very close to the present day gown. Well, it seems the Bar never stopped mourning.

And thus we have our penguinesque pride, a tradition inherited from the British and continued by our laws.

Now, we are familiar with our judges ticking-off lawyers for not being appropriately dressed. But surprise, surprise! It happens in Britain too! Recently, an unfortunate fellow decided to wear colourful ribbons and medals on his gown (don't ask me why) and got reprimanded by the Crown Court judge with the remark that he was "looking like something out of Harry Potter".

One of the great advantages of having a dress code is the comical consequence of flouting it.

And while we may enjoy criticising the court dress for its stuffiness and lack of imagination, most of us do love it and miss it. May coronavirus desist from attaching itself to our uniform so that we can be back in that regal attire.

(The author is a lawyer practising in the Gujarat High Court)