A Tribute To My Mentor - Ashok H Desai 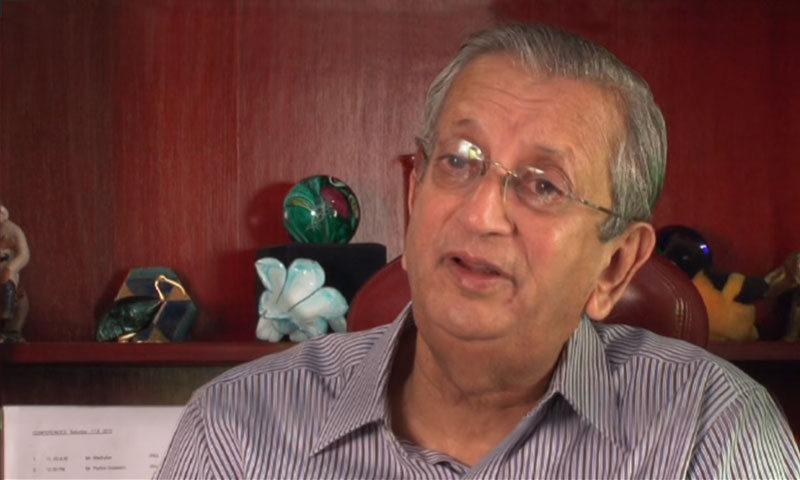 All those who knew Ashok H.Desai, popularly known as 'Ashok Bhai' and 'Sir' to me, will always remember him fondly. A man with the soul of a monk and the heart of a king. My association with Sir goes back to March 2005 when I joined his chambers as a junior. I was relatively new in the profession at that time. He was about 71 years old and was on the verge of completing 50 glorious years at...

All those who knew Ashok H.Desai, popularly known as 'Ashok Bhai' and 'Sir' to me, will always remember him fondly. A man with the soul of a monk and the heart of a king.

My association with Sir goes back to March 2005 when I joined his chambers as a junior. I was relatively new in the profession at that time. He was about 71 years old and was on the verge of completing 50 glorious years at the Bar, including holding the high office of Attorney General for India. Naturally, at that stage, with a desire to do lesser and selective work, he was reluctant to add another junior in his chambers. Nonetheless, he took me under his tutelage with a caveat that the matter would be reviewed again after about two months. Luckily for me, the decision to review was forgotten by him and I had the privilege to be his last junior. I continued to be his junior for many years.

He was a remarkable Senior in every sense of the word. He was extremely patient and reasonable with his juniors. When I joined his chambers as a raw junior, he understood my position and initially, only asked me to find the meaning of some words from the large collection of dictionaries in his chamber. As time went by, he entrusted me with more and more work, thereby, ensuring I gain the necessary exposure and confidence. He never forgot to acknowledge the contribution of his juniors in court and was always happy to see them argue. In fact, on one occasion, I had to start arguing as Sir was stuck in another court. He soon entered the courtroom but asked me to continue arguing as he took the seat besides me. Not only that, he called me in the evening to encourage me. Such was his large heartedness. Sir was particularly proud of his junior's achievements be it senior designation or judgeship and each such occasion was celebrated with great enthusiasm and fanfare. Sir was equally concerned and considerate about the welfare of his staff and their family.

There was a comforting predictability in his approach towards his juniors and instructing counsel in the sense that they knew exactly how he wanted his note in yellow paper and paper-book. He emphasized the importance of his written submissions to be printed in blue colour as Judges would easily identify them as his submissions. He regaled us with his experience with Chief Justice A.N.Ray who immediately identified his submissions due to its blue colour.

Sir was a great lawyer with extraordinary persuasive skill and deep knowledge of the law. He was very strong on first principles as well as on case laws. He was very meticulous, methodical, hard working and always open to new ideas. He maintained a red diary with case laws and citations written alphabetically. That red diary of Sir is certainly superior to any legal search engine. That apart, he had originality in his thought process and was always thinking about his case to find an answer to a difficult point. He was always courteous to the Bench and his opponents. However, if the situation so demanded, he would put across his view in a firm but a polite manner. Most importantly, he maintained the high standard of the Bar and earned the universal respect of the Bar and Bench. He also held the high office of Attorney General for India with great dignity and decorum.

Sir played a stellar role in upholding the fundamental right to freedom of expression in Sakharam Binder's case where the Bombay High Court struck down the pre-censorship imposed upon Vijay Tendulkar's play "Sakaram Binders" on the ground of obscenity. He himself described that Antulay's case was one of the great moments of his professional life. He successfully argued the said case on behalf of Mrinal Gore and her colleagues before the Bombay High Court which held that there was misbehavior on the part of the administration in the matter of cement distribution to builders who happened to give donation to Indira Gandhi Pratishthan. During the dark days of emergency, Sir fearlessly and courageously defended the civil liberties and the human rights of the citizens. He continued to fight for the civil liberties and the human rights of citizens throughout his career, including the cases of Nandini Sundar v. Union of India and Navtej Singh Johar v. Union of India.

He played a significant role in the exposition and development of Constitutional law and other jurisprudence in India. He appeared for the Petitioner in the landmark case of Ramana Shetty v International Airport Authority where the Supreme Court held that arbitrariness was anathema to the concept of equality. He also argued as Attorney General in P.V.Narasimha Rao's case where the Supreme Court, inter-alia, held that Member of Parliament would be a public servant and would be subject to prosecution under the Prevention of Corruption Act. Sir also appeared in the famous Vineet Narain's case where the Supreme Court issued various directions towards enhancing the autonomy of the CBI. In a significant case pertaining to Assam, he successfully argued for the Petitioner in Sarbananda Sonowal's case where a three-judge Bench of the Supreme Court of India held that the Illegal Migrants (Determination by Tribunals) Act, 1983 "has created the biggest hurdle and is the main impediment or barrier in the identification and deportation of illegal migrants" and struck down the Act. Sir also appeared in the case of Amrendra Singh's relating to legislative privilege where the court held that while the House had an undoubted right to expel a member for conduct unbecoming member of the House the privilege could not be exercised in relation to an activity that had no bearing on his legislative functions. He was also an expert in election law and appeared in many leading cases. He was equally adroit in civil and criminal law. He also appeared in a significant case concerning criminal jurisprudence being Iridium India v Motorola Incorporated & ors, where the Supreme Court held that corporation or company cannot claim immunity from criminal prosecution on the grounds that it is incapable of possessing the necessary mens rea to commit a criminal offence. All in all, the law reports bear testimony to his invaluable contribution to all branches of law.

My association with him, however, was much more than that of a Senior and Junior. He made us part of his family. Those who knew him well will agree that a large influence in his life was that of his loving wife Suverna, 'Suverna Aunty' to me. His love for art and music and his simplicity were to a large extent attributable to her. She is an exceptionally strong and kind lady. They gave a personal touch to everything important in my life. Sir along with son Harsh attended our wedding at Allahabad. They were delighted when our daughters were born. The list is endless. Another great tradition that he followed was the dinners where he invited his juniors and some close friends, some times at their residence and sometimes, outside. Though, we looked forward to the delicious vegetarian food at their place, Sir would occasionally prefer going outside as he was also fond of non vegetarian food. His friends circle was large and varied. He enjoyed the company of both the young and the old and infact, his dinners in small groups would always have a mix of people and there was free flow of conversations and diverse opinions. He enjoyed everything in moderation. However, he was a connoisseur of the finest things. After, each vacation, he would return and hold a dinner to share his tales.

Sir was an extraordinary man. He lived his life with simplicity even after achieving great feats and was always grounded. He believed in the sanctity of Institutions and the importance of Institutional integrity. He believed and practiced the high ethical values of life and the profession. He never shied away from taking a difficult stance whenever a real issue concerning judicial accountability arose. He was always helpful and accessible to the members of the Bar. He was courageous yet cautious, courteous yet firm and extremely independent minded yet always open to new ideas and thoughts. He was role model for his temperance and moderation. All these, he practiced with a smile on his face.

Sir was one of the wittiest men, I have known and he would always have his one liner quips ready for all occasions. He was also a voracious reader and inevitably, after a particular time in the evening, he would switch from law books to his rich and updated collection of books of literature, poetry etc with a glass of wine. He always kept himself abreast with the latest developments whether it was law, technology, art or politics. On a lighter note, he also enjoyed a bit of gossip !!

With Sir's passing away, the Legal Fraternity has lost an icon who carried out his profession with utmost dignity. Personally, I will miss sharing every story, every update and every good news with my mentor.

I respectfully pay my homage to this extraordinary man, under whom, I can proudly say, to have learnt the law and the ways of life.

As an old Hebrew saying goes:

But in thankfulness, That He was".

I will miss you !