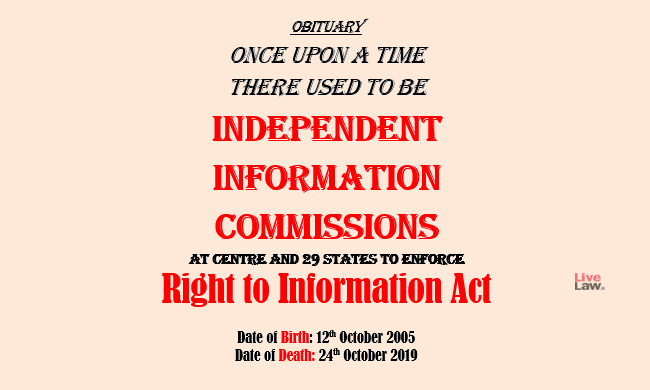 x
[We were celebrating the 12th October as RTI formation day. But immediately after 12 days we are now compelled to mourn the sad demise of institution of Independent Information Commission on 24th October 2019 on which the destructive Rules are notified.]

The suspense and mystery on the real impact on RTI is now ended. The damage to autonomy of all Information Commissioners in India is more that what was expected. It was not just cutting the independence but complete subordination of that institution with chief subordinate as head, to whom the other commissioners are made subordinate servants.It has the longest title, "The Right to...

The suspense and mystery on the real impact on RTI is now ended. The damage to autonomy of all Information Commissioners in India is more that what was expected. It was not just cutting the independence but complete subordination of that institution with chief subordinate as head, to whom the other commissioners are made subordinate servants.

3. Rule 22 gives the Central Government the discretionary power to relax any of these Rules about any class or category of persons in future.

4. Rule 21 gives absolute power to the Central Government to decide on any other allowances or service conditions not specifically covered by the 2019 Rules and its decision will be binding.

5. Rule 23 makes the Central Government the final arbiter about the interpretation of these Rules.

1. The Amendment Act 2019 and Rules 2019 destroy the independence accorded to the Information Commission within the whole scheme of Act of 2005, which cannot be taken away by amending couple of sections.

2. The Centre's control over the State Information Commissions is against federal character of the Constitution, which is basic structure, to amend which the Parliament has no power.

4. The State ICs are being paid out of the Consolidated Fund of the concerned State. The Central Government has no control over the manner of use of funds from the State's Consolidated Fund except when the State is placed under President's Rule under Article 356 of the Constitution of India. Its unfortunate that without understanding this encroachment into powers of the states by the Centre, three states' ruling parties – Biju Janata Dal (Odisha), YSRCP (Andhra Pradesh) and TRS (Telangana) has supported the bill that diminished their powers.

5. The Amendment and Rules have not been preceded by the consultations with stake holders – information commissioners – states and central, civil society and the MPs. This is in flagrant violation of the Pre-Legislative Consultation Policy of 2014 that requires all draft rules to be placed in the public domain for comments/suggestions of people. The draft of Rules or Bill was not made available in the public domain and no consultations were held.

6. The contemplated subordination of Information Commissioners was not informed even to both Houses of Parliament, is clear breach of Parliamentary Privileges.

The Fear of RTI

The Right to Information is very small but very significant and powerful right of citizens to take a certified copy of the pages from the government file, which facilitates to enforce his other rights. The power of the Information Commission is also very small – to direct the Government officer to share a page or show a file. Imagine the fear this right has generated in the minds of politicians and bureaucrats, that they want their loyal persons to sit on the chairs of Commission so that their fake degrees or corrupt deeds are not exposed. This could probably be the sole objective and profound reason for this destructive amendment and subordinating rules.

The Act and Rules of 2019 have the effect of indoctrinating complete subordination into the institution of the information commission, making the RTI not workable. While RTI Amendment Act 2019, destroyed the independence, the Rules completed the job by indoctrinating the subordination. Between the lines of these rules one finds how the Chief Information Commissioner has been degraded from his statute-guaranteed-status equal to Chief Election Commissioner which is pari materia to judge of Supreme Court into the lower level of Secretary that reminds him always that he will be working as a bureaucratic under their superiors. Most of the Chief Information Commissioners were practically subservient though the Act wanted them to act independently. Now subordination and loyalty as most considered qualifications for appointment as ICs is now legalized. That is the real jolt to the independence of the Commissioners which was accorded after much deliberations, consultations, hearings and approval by the Parliamentary Standing Committee (PSC).

The PSC found the dire need to give the stature of Chief Election Commission to Chief IC and made him first among equal Information Commissioners so that collectively the Commissioners will protect the citizens' right of access to public records without fear of officers in PMO or CMO. This fearless functioning capacity has been taken away.

The Chief was first among equals earlier under the original scheme of RTI Act but now he is the super boss. It was a clever way to weaken the Commission and the Commissioners. The Rules 2019 reduced the salary of the Information Commission from Rs. 2.50 lakh to Rs. 2.25 lakh, to make it clear that Chief will be of Secretary rank while the Commissioners would serve below him at Joint Secretary level. Other rules elaborated how they were equated with the bureaucrats drawing that amount of salary in Civil Services. The equality inter-se the Commissioners, which facilitated some independent bold decisions by a few Commissioners will be impossible from now.

No place to Non-bureaucratic Commissioners

The rule 4 empowers the Centre to appoint bureaucrats who are still in service for three years and from the date of their appointment they are considered to have been retired.

This revealed the intention of Centre to appoint former civil servants only to this office, despite the provisions of the RTI Act mandating to pick up Commissioners from different fields. These Rules totally ignore and side line the mandate of Section 12(5) that mandates the Governments to select the Commissioners from different fields of social activity. There is no provision stipulated for the Commissioners selected from non-bureaucrat fields like journalism or academician like this author. There is no mention about their possible pension, which is far low than the bureaucrat turned Commissioners, which is in violation of the policy of one rank one pension.

With the promulgation of the Rules 2019 from 24th October 2019, the Centre will get all powers to twist the hands of Chief Information Commissioners, Information Commissioners at Centre and all the 28 State ICs., ending the federal scheme of distribution of powers under original RTI Act 2005. With Rule 13, it also paved way for bureaucratization of the state Commissioners officially and reduced the possibility of the non-bureaucrats getting into this office. The rules made under the amendment, it kills the spirit of the original RTI Act, which is against the norm that the Rules cannot overtake and violate the original Act, under which they were made.

The centre also retained the residuary power to fill the gaps (Rule 21) and arbiter power over to give final interpretation (Rule 24). Besides, the Centre has also gave itself the power to relax further these rules (Rule 22) which could be used to incentivise the Commissioners who are loyal to rulers than to the rules.

It was an innovative idea of killing the RTI with altering just couple of sections wherefrom the Central and State Information Commissions drew their independence. Unfortunately, no Government wants a strong Information Commissioner that implements the provisions of the RTI Act providing scrutiny of the files much to the embarrassment to sycophant officers and their political bosses.

At one point of time in 2005 the political leadership of the Government was convinced and made to understand the need to give right to the citizens to demand and get the certified copies of pages from the files of the Government to strengthen democracy. But this was not liked and strongly opposed by the Bureaucrats.

The bureaucrats continuously obstructed and resisted the RTI draft from becoming legislation till it was passed. After its commencement, some of those anti-RTI officers were benefitted by occupying the key position of the Commissioner and passed several anti RTI orders to facilitate departments to deny disclosure requests. That was operational dilution of the empowering right.

Very rarely non-officer persons were selected. Mr. Shailesh Gandhi, an RTI activist was made Commissioner on the advice of LK Advani, when he was the leader of opposition heading the BJP. That was possible because the selection committee for picking up names for ICs included the leader of the opposition (Section 12(3)(ii) of RTI Act 2005). (This author was selected as CIC from field of law by the UPA government in 2013, based on application with biodata). Though opposition leader was there on the Selection committee, the governments took decisions by 2:1 majority strength (PM and cabinet member: 1 Leader of Opposition). The selections made shows that the Governments at Centre and States preferred to fill the slots 90 per cent by the bureaucrats ignoring the eminent persons from fields envisaged in Section 12(5) such as law, science and technology, social service, management, journalism, mass media or administration and governance. The objective of the law makers to make the Commissions a body representing all walks of life was totally ignored. The loyalist bureaucrats who never had proven credentials of providing access to information or committed to transparency were preferred to the eminent persons from these walks of life who strived for good governance. There are great number of officers who have increased transparency and improved the quality of honest administration, who rarely were picked up.

The heart burning that was generated when increasingly bureaucrats were made ICs, who were enjoying higher privileges. Perhaps the senior most officers felt embarrassed with some of their colleagues riding higher status and rank as ICs. This could be one of the reasons for their continued attempts to reduce the status of ICs. But in the process, they have diluted an important transparency right.

The author hopes that this Amendment and the Rules cannot stand the objective and independent judicial review, if the civil society bring the issues appropriately to the courts of law.

This article was first published in The Wire. Read it here