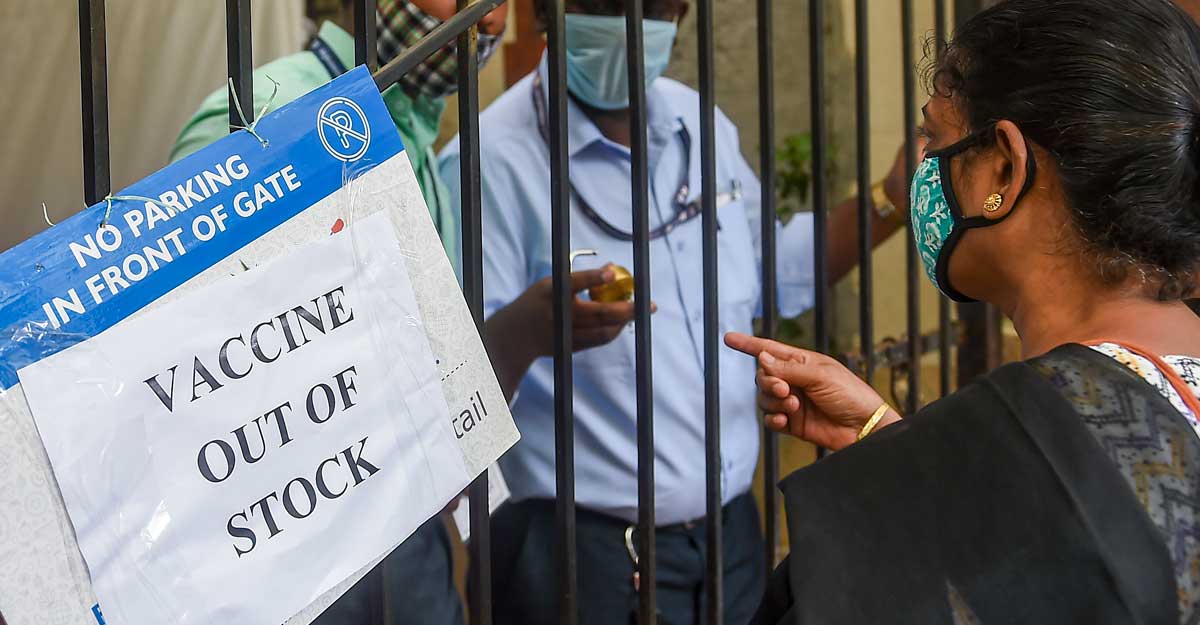 x
Asking State Governments to compete in open market for vaccine procurement, while Centre keeps an assured quota for itself, is manifestly arbitrary and discriminatory.

Acclaimed legal scholar Michael J Sandel starts his book "Justice: What is the right thing to do?" by discussing the justness of sellers charging higher prices for essential goods during a natural calamity.After laying out the competing arguments of free-market and social-welfare in support and opposition of 'price-gouging' during a disaster, Sandel asks : "This dilemma points to one...

Acclaimed legal scholar Michael J Sandel starts his book "Justice: What is the right thing to do?" by discussing the justness of sellers charging higher prices for essential goods during a natural calamity.

After laying out the competing arguments of free-market and social-welfare in support and opposition of 'price-gouging' during a disaster, Sandel asks :

"This dilemma points to one of the great questions of political philosophy: Does a just society seek to promote the virtue of its citizens? Or should law be neutral toward competing conceptions of virtue, so that citizens can be free to choose for themselves the best way to live?".

These questions come to mind while discussing the issue of pricing of COVID-19 vaccines.

During the surge of the second wave of the COVID-19 pandemic, the Central Government - which was facing a lot of public resentment and anger- announced a new vaccine policy on April 19.

In a press release, the Ministry of Health and Family Welfare announced that all person above the age of 18 years will be eligible for COVID-19 vaccine under the "liberalized and accelerated" phase III of vaccination strategy from May 1. Right now, vaccines are restricted to those above the age of 45 years and frontline workers.

This news generated a lot of positive vibes among the general public, who were reeling under panic and anxiety. However, as it is said, the devil lies in the details! While the headlines and news-tickers celebrated the opening of vaccines for all above the age of 18 years, many other aspects of the policy escaped public scrutiny.

The effect of this policy is that dual-pricing of vaccines is allowed, and states are forced to compete with private players to procure vaccines from the open market, while the Centre is likely to get them at a discounted rate.

Also, there will be three streams of vaccine distribution :

Yesterday, Serum Institute of India, a private company which produces the 'COVISHIELD' vaccine, announced that it will sell vaccines to States at Rs 400 per dose and to private entities at Rs 600 per dose. To put this in context, the rate at which SII is supplying to Centre at present is Rs.150 per dose.

It is important to note that "public health" is a state subject as per Entry 6 of the List II of the Second Schedule.

The Centre's power in the issue is derived from Entry 29 of the Concurrent List(List III, over which States also have power) which says "Prevention of extension from one State to another of infectious or contagious diseases or pests affecting men,animals and plants".

Since COVID-19 has been declared as a "national disaster", the Central Government has been using its vast powers under the National Disaster Management Act to take various decisions in relation to pandemic management.

It is a different point of discussion whether the policy relating to vaccine allocation will come under the ambit of disaster management. Since we only have a press release in public domain, it is not yet clear whether this vaccine policy has been taken in exercise of powers under the NDMA or using the general executive powers of the Union Health Ministry.

Be that as it may, it is indisputable that both States and the Centre have the same constitutional obligation to protect the health of the citizens. In that regard, there cannot be distinction between a State Government and the Central Government. Therefore, asking State Governments to compete in open market for vaccine procurement, while Centre keeps an assured quota for itself, is manifestly arbitrary and discriminatory.

It is also to be noted that the policy does not make any assurance of vaccine availability to the States. The States have to compete with private entities in open market. So, when there are private players willing to purchase vaccines at Rs 600, is there any guarantee of vaccine availability for states at the rate of Rs 400? If a larger chunk of the open market pool gets diverted to the private entities, would it not mean that the general public will have to pay even higher prices for the vaccine?The promise of free vaccines made by some state governments will not materialize if they don't get adequate quota of doses.

This policy also puts states in a position of competing with each other for the share of vaccines in the open market. The availability of vaccine for a person in the age bracket of 18-45 years is perhaps contingent on the ability of his state government in outsmarting other state governments in open market. Can the health of a citizen be left to the vagaries of the open market competition, especially during a pandemic? Promoting such inter-state competition can lead to regional disparities in vaccine availability, undermining the goal of universal vaccination.

Mumbai-based lawyer Murali Neelakantan, who has been actively writing and commenting about the vaccination policy in leading dailies and public platforms, said that the there is a clear violation of the right to equality(Article 14) and right to health (Article 21) in this issue. He pointed out that dual-pricing in other commodities has only resulted in corruption and black-marketing. According to him, dual pricing means that private sector will get more supplies and government vaccination for the masses will suffer. He also pointed out that the policy is against the Centre's own policy of one company, one drug, one price. The present policy, he said, will lead to multiple prices charged to different patients since service provides will add their "service charges".

Public health expert and epidemiologist Chandrakant Lahariya told the Firstpost that the new policy can lead to an unfair burden on the states.

"For all other vaccination efforts—such as polio, BCG, etc—the funds traditionally come from the Centre. For COVID-19 vaccination too, the Centre should have provided the funds. Now, the strategy announced by the government on Monday will effectively lead to states competing with one another and private sector, to procure vaccines. It is quite possible that richer states will gain at the expense of less affluent ones. Also, as of now, state governments do not have experience in dealing and negotiating with vaccine manufacturers. This lack of experience can also create hurdles for them", he commented.

He further remarked, "When India is in the middle of a pandemic and the Central government has already allocated Rs 35,000 crore for COVID-19 vaccines, it would be incorrect to push states in the uncharted territory of procurement of vaccines."

Violations of Article 14 and 21

For a classification to be valid under Article 14, it must pass a two-pronged test:

(i) it should be founded on an intelligible differentia, which distinguishes those that are grouped together from those that have been excluded; and

(ii) the differentia must have a rational nexus with the object that the statute seeks to achieve.

Here, there is no intelligible differentia between the States and the Centre as far as their duties to protect public health is concerned. Both have the same constitutional obligation.

Also, the classification is defeating the purpose of universal vaccination. The policy leads to a lot of uncertainties, as discussed above. There is no assurance that the States will get the required doses. If universal vaccination was the intention, the policy should have given states an assured share, avoiding dual-pricing.

The exclusion of persons below the age of 45 years from the free vaccine pool of the Centre also smacks of unreasonable classification.

The policy has also created uncertainties about the second pending dose of persons in the category of above 45 years. As per certain reports, private hospitals will no longer offer the Rs 250 option for the second dose from May 1. According to a report in the Economic Times "from May 1, private hospitals will no longer offer the Rs 250 per jab option. Persons seeking their second dose after May 1 can choose to get the jab for free at a government centre or pay the price negotiated with vaccine manufacturer at a private facility, provided supplies are available".

In this backdrop, the principle of 'manifest arbitrariness' also comes into application. As per Supreme Court precedents, actions taken capriciously, irrationally and/or without adequate determining principle are "manifestly arbitrary".

The policy can lead to the denial of vaccines to persons, especially to those belonging to marginalized and vulnerable sections, leading to the negation of right to health and life under Article 21 of the Constitution.

The UNESCO has urged that COVID19 vaccines be treated as a global public good to ensure they are made equitably available in all countries, and not only to those who bid the highest for these vaccines.

If we approach the issue from the angle of public interest, complete vaccination of all is essential for the overall welfare of the country. It is not just a matter of individual choice. So, the vaccine strategy should be devised in such a way to minimize vaccine hesitancy and to ensure access for all. Maximizing free access to vaccines is the answer to this.

As written by lawyers Mukund Unny and Radhika Roy in The Indian Express earlier, "if the right to health is a guaranteed fundamental right for an Indian citizen, she also possesses a right to free vaccine as it is a sub-set of the right to life which is guaranteed by our Constitution".

Recently, the Supreme Court had quashed the Central Government's policy to deny the benefit of interest waiver during loan moratorium to loans above Rs 2 crores. The Court held that the policy of the Government to restrict such interest waiver to loans below Rs 2 crores was "arbitrary and discriminatory", as no justification or reasons were given for making such a classification. The Court's conclusion was based on its observation that the hardships faced by both the categories were similar.

If the same principle is applied, this vaccination policy will not pass the muster of constitutionality.

(Manu Sebastian is the Managing Editor of LiveLaw; he may be reached at [email protected] He tweets at @manuvichar)