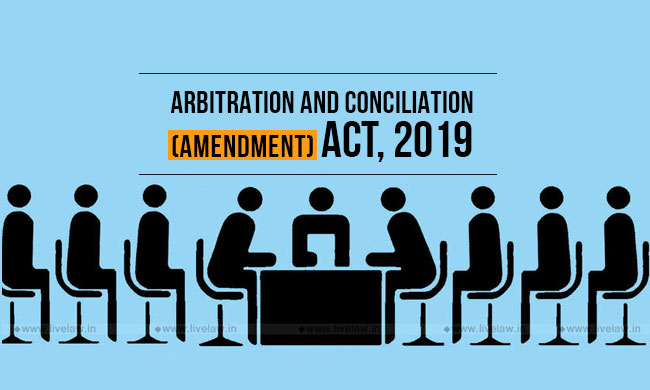 It was once famously said by Benjamin Franklin, one of the founding fathers of the United States and an outstanding polymath that, "When will mankind be convinced and agree to settle their difficulties by arbitration?". Little did he know that the Government of India would be faced with the same dilemma more than three centuries later. In an endeavour to convince the litigants to settle...

It was once famously said by Benjamin Franklin, one of the founding fathers of the United States and an outstanding polymath that, "When will mankind be convinced and agree to settle their difficulties by arbitration?". Little did he know that the Government of India would be faced with the same dilemma more than three centuries later.

This Article attempts to delineate the changes introduced by the 2019 Amendment Act, their necessity and their likely impact on the arbitration proceedings.

Application of the Arbitration and Conciliation (Amendment) Act, 2015

The most significant amendment brought about by the 2019 Amendment Act is doing away with the retrospective nature of the 2015 Amendment Act. Section 26 of the 2019 Amendment has clarified that unless the parties otherwise agree, the amendments made to the 1996 Act by the 2015 Amendment will not apply to the arbitral proceedings and the related court proceedings which commenced before the date of commencement of the 2015 Amendment i.e., October 23, 2015. This overrules the position laid down by the Supreme Court in BCCI v. Kochi Cricket Private Limited (2018) 6 SCC 287, where it was held that the 2015 amendment Act was prospective and would apply to: (a) arbitral proceedings commenced on or after October 23, 2015; and (b) arbitration-related court proceedings filed on or after October 23, 2015, even where the arbitral proceedings had been commenced before the amendments came into force. The Court in this case held the amended Section 36 of the Act (execution) to be a merely procedural provision and thus applicable retrospectively to Section 34 petitions (challenge to domestic awards) pending as on October 23, 2015. The judgment led to a plethora of execution petitions being filed in the pending Section 34 petitions and concomitant Applications by the Section 34 Petitioners seeking stay on the operation of the impugned Arbitral Award.

Now with the 2019 Amendment diluting the effect of Kochi Cricket Private Limited(supra), a large number of the pending execution petitions and stay applications would, unless the same have already been disposed of, be rendered non-maintainable inasmuch as Section 36 of the un-amended 1996 Act provides for automatic stay of awards upon the filing of a Section 34 challenge petition. While on the one hand, it would curtail some delay by dispensing with the decision on the execution petitions and stay applications, but on the other hand, it is likely to compound the delay in adjudication of the Section 34 petition as all pending court proceedings in relation to arbitrations that had commenced prior to October 23, 2015, will be relegated to the pre-amendment Act scenario, and thus, would not be governed by the 1 year timeline prescribed u/s 34(6) of the Act, notwithstanding the impracticality of such timeline.

"The minute that you go to arbitration, it's 100% confidential, so nobody ever hears about it". These precocious words of the American TV commentator, Gretchen Carlson, have resonated with the Govt. of India with the insertion of Section 42A in the principal Act of 1996, explicitly mandating the arbitrator(s), the arbitral institution concerned and the parties themselves to maintain the confidentiality of all arbitration proceedings, except where disclosure of the award is necessary for the purpose of its implementation and enforcement. This is in line with Section 75 of the 1996 Act, which incorporates a similar requirement in respect of the conciliation proceedings.

Furthermore, the newly inserted Section 42B creates a safety valve for the arbitrators and clarifies that no suit or other legal proceedings shall lie against an arbitrator(s) for anything done in good faith or intended to be done under the 1996 Act.

Modified timeline for completion of proceedings

Section 29A of the 2015 Amendment Act, which provided a 12-month timeline for completing an arbitration starting from the date the tribunal entered reference, faced a lot of flak from the Arbitrators and practitioners alike owing to its rigidity, which invariably compelled the parties to approach the courts to seek extension. The 2019 amendment Act envisages more flexibility by providing that the edict of Section 29A would apply from the date of completion of pleadings. The modified timelines prescribed by the 2019 Amendment Act are as under:-

Further, it has also been provided in the 2019 Amendment that if a Court deems it fit to effect a reduction in the fees of the arbitrator(s) while considering such an application, it shall do so only after giving the arbitrator(s) concerned an opportunity of being heard in the matter.

Section 7 of the 2019 Amendment Act replaces the words "furnishes proof that" appearing u/s 34(2)(a) of the Act, with "establishes on the basis of the record of the arbitral tribunal that", to clarify that the parties must rely on the record before the arbitral tribunal alone at the time of challenge of an award, thereby expressly barring reference to material which was not placed before the arbitral tribunal during the arbitration proceedings. This amendment draws sustenance from the pronouncement of the Supreme Court in M/s Emkay Global Financial Services Ltd. Vs. Girdhar Sondhi; (2018) 9 SCC 49, wherein it was held that "application for setting aside an arbitral award will not ordinarily require anything beyond the record that was before the Arbitrator. However, if there are matters not contained in such record, and are relevant to the determination of issues arising under Section 34(2)(a), they may be brought to the notice of the Court by way of affidavits filed by both parties".

Diluting the effect of 2015 Amendment on Section 17

Section 7 of the 2019 Amendment amends Section 17 of the 1996 Act, insofar as it omits the words "or at any time after the making of the arbitral award but before it is enforced in accordance with section 36", thereby restricting the power of the Arbitral Tribunal to order interim relief after the making of an award and before its enforcement.

Interplay between the Arbitral Institution and Arbitration Council of India

The 2019 Amendment Act introduces the concept of an Arbitration Council of India ("Council", for short) for the first time, which would be established by a notification of the Central Government, and will have its headquarters in Delhi. Sections 43A-M of Part 1A of the Act, inter alia, prescribe the establishment, incorporation, composition, powers and duties of the Council. Further, the Council has been empowered to make grading of the arbitral institutions (defined u/s 2(1)(ca)) on the basis of criteria relating to infrastructure, quality and calibre of arbitrators, performance and compliance of time limits for disposal of domestic or international commercial arbitrations, in such manner as may be specified by the regulations framed under the Act. The qualifications, experience and norms for accreditation of arbitrators are prescribed in the Eighth Schedule to the Act. However, these qualifications, experience and norms pertain to accreditation of

Further, on account of exclusion of the foreign legal professionals from the accredited panel of arbitrators, arbitrations to be seated in India may face stiff resistance from the foreign parties and litigants.

Appointment of Arbitrators under Section 11

While there can be a lot of scepticism about the increasing role of the arbitral institution in the appointment procedure, however, it would certainly diminish the burden on the courts and even facilitate speedy appointment of arbitrators.

Section 45 of the Act, under Part II (power of Courts to refer the matter to arbitration) has been amended to substitute the words "unless it finds" with the words "unless it prima facie finds", so as to make it pari materia with Section 8 of the Act as regards the nature of the determination required to be made by a Court before the parties can be referred to arbitration.