Law On Reels - 'Ardh Satya': A Nuanced Movie On Working Of Indian Police 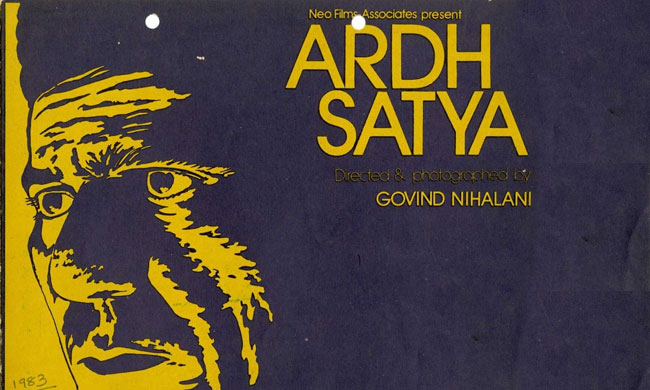 "Jab court ki date aane wali hoti hai to hum chhuti lekar case diary bharte hai",[1] said a police officer in a conference I recently attended. Police reforms in India have been talked about for almost 4 decades now. But our police continue to be overburdened. It continues to operate under archaic laws and colonial mind set with all kinds of prejudices. And this is where Ardh Satya...

"Jab court ki date aane wali hoti hai to hum chhuti lekar case diary bharte hai",[1] said a police officer in a conference I recently attended. Police reforms in India have been talked about for almost 4 decades now. But our police continue to be overburdened. It continues to operate under archaic laws and colonial mind set with all kinds of prejudices. And this is where Ardh Satya becomes relevant; a movie which till date remains one of the most nuanced films on police machinery in India.

While Bollywood is no stranger to movies on police, but most of the mainstream Hindi movies on police are based on chest thumping, and quick justice rhetoric. Recent movies on police like Singham, Simmba, Dabang are all high on rhetoric and less on content movies. Ardh Satya on the other hand is socio-political as well as psychological commentary on working of Indian police. Ardh Satya's protagonist character Anant Valenkar (Om Puri) is a rare insight into struggles, and the heroes and demons of a Indian police personnel.

The film is story of Anant Valenkar (Om Puri), a Sub Inspector in Mumbai Police who wanted to read literature and become a professor but is forced into the service by his patriarchal father (Amrish Puri). He joins as an idealist or 'Nek and Kadak inspector' (as Sadashiv Amrapukar/ Rama Shetty calls him). But soon, reality of political interference, corruption and his own struggle with his masculinity hits his sense of idealism. Ultimately he ends up torturing a person to death in his custody and becomes like Mike Lobo. Mike Lobo (Naseeruddin Shah) is presented as ultimate epitome of loneliness of fighting against a casual comfortable system. Once an honest, strong officer is reduced to become a drunk beggar. Lobo is continuously presented to Anant as an example of what would happen if you do not do your job 'chupchap', without questioning the system much.

The film came in 1983, an era when Human rights movement in India was in its early age. The S.P. Gupta case had just come in 1981 laying foundation for PIL jurisdiction. PUCL was established just few years ago in 1976. Sunil Batra,[2] Charles Sobraj [3] Francis C. Mullin[4] and other cases on rights of persons in custody had began to come. The famous D.K. Basu case was still far from sight. On front of police reforms National Police Commission (NPC) was just set up in 1979. Thus, the conversations on humanizing and constitutionalizing the police force with human rights based jurisprudence had just started when the movie came.

The recommendations of the 1979 Police Commission are yet to be fully realized. The Supreme Court guidelines in Praksh Singh case are yet to be achieved. [5] And thus the realism of the movie remains almost as unbearable in 2019 as it would have been in 1983.

The unfettered and undue interference in everyday functioning of police is an open secret. Political interference is omnipresent from investigation to matters of disciplinary actions, postings, transfers, tenure etc. of police officers. (A fact recognized in Prakash Singh Case too). According to State of Policing in India Report, 2019, every 2 in 5 police personnel believe that political pressure is the biggest hurdle to crime investigation. [6]

In the film, Rama Shetty is a local gunda with variety of illegal businesses. From senior police officers to politicians are all what he describes as his 'personal friends'. Anant constantly attempts to bring him and his men to justice but fails every time. When he goes to arrest Rama Shetty on been named in dying declaration of a dead man, Shetty very casually replies- "Girftar karne aaye ho? Jao. Kal aana".[7] His colleagues continuously advice him to do his 'naukari' and not play God by attempting to bring Shetty to justice. ("Aap apne aapko kya khuda samjhte hai", he is asked)[8]. When Anant does not bow down his bosses warn him of dismissal if he does anything to Shetty. Anant ultimately gives up. Shetty fights elections and Anant ends up working in his election rally on law and order duty.

Political interference is also manifested in matters of dismissal, appointment, suspension etc. When Anant finds himself under disciplinary inquiry and potential suspension, he escapes it using a 'Delhi wala contact' i.e. through some political boss in Delhi. In the end too, Anant goes to Rama Shetty (a high level politician by then) to get him out of another disciplinary inquiry against for killing a man in his custody.

Patriarchy defines the socio-cultural traits of being a 'man' with continuous expectation from 'men' to prove their 'masculinity', to prove that they are 'men enough'. This expectation increases when the men is the 'men in uniform', i.e. a police officer with authority. While there is more research required to be undertaken in masculinity and its problems in police machinery in India, yet this construction has its consequences. The uniform becomes tool for masculine anger. The masculinity problem of 'being man in uniform' is continuous struggle of protagonist Anant.

As a child, Anant has seen his abusive father beat and torture his mother. Over the years, he has accumulated the sense of anger. His masculinity is hurt that he could do nothing to 'protect' his mother. On joining the police, i.e. getting the 'vardi'/'uniform', proving his 'masculinity' that he is men enough to take actions, bring justice, becomes his permanent focus. The custodial violence perpetuated by him, the strong desire to bring Shetty to justice originates from this need of feeling 'like a man'. In his own words- "Rama Shetty ka naam sunte hai mujhe lagta hai jaise koi meri mardangi ko lalkar raha hai."[9] He beats up people very heavily who harasses his love interest (Smita Patil) on a bus. (Looking closely, we may realize that this masculine anger is also behind the demands of death sentence, killing without trial and stone pelting punishments on rape accused.)

But at the same time, this protection is reserved for certain 'good women'. The same Anant jokes with his colleagues about the 'maal'(a derogatory propertied term for woman), he found at a party and their 'measurement'. He and his police personnel colleagues continuously indulge in jokes about their wives.

At one time, Smita Patil advices him to leave the service. This advice of her signals towards the fundamental nature of police machinery which encourages feudal masculine angers. Anant disagrees though.

India signed the United Nations Convention against Torture in 1997 but it is yet to ratify it. The matter of creating comprehensive legislation on torture has been litigated in Supreme Court.[10] In 2017, Government of India, did tell the Supreme Court that it is 'seriously considering' ratification of the convention after Law Commission report on it.[11] But torture has become such a normalized practice. In fact, over the years police has developed mechanisms to torture and beat in such a manner that no bodily marks are left.[12]

The movie highlights this casual acceptance of torture. When a person dies facing torture by Anant, his father is furious at him. "Sambhal Kar peeeta jata hai" questions father.[13] Anant takes the defence that "Sambhal kar khee peeta tha".[14] And anyone who questions this casual acceptance of torture is called 'gudh dimag', a fool who does not appreciate that 'truth cannot be taken out from the criminals without little bit of beating'.

Thus torture itself is not considered violation of constitution. Rather it should be done in a careful manner to not leave marks and any attempt to visualize alternative means of investigation for seeking truth, are to be brushed aside as 'impractical'.

Movie has also highlighted various other challenges of Indian police force especially the inter-institutional conflict (between crime branch and police), and corruption. The class interest of police is also visible from the movie. While powerful rich Rama Shetty goes scot free, a weaker person is killed in custody. Similarly, the actions of police during labour unrest in a factory show where class loyalties of police lie.

In the transformative vision of our Constitution, the dream was to break the chains of past of feudalism and move to light of equality in the post colonial world. But have our police system internalized these transformative vision? Or is the colonial system of police working to break bones and crushing the spirit of anyone distinctly hoping to transform the society? Our criminal law and criminal justice system needs to be contitutionalized.[15] This movie is relevant commentary on where we have failed in making our systems 'transformative'. Anyone who is hoping to work with criminal justice system in a constitutional democracy should watch this movie.

(This is ninth in the "Law On Reels" series, which explores legal themes in movies)

[1] Translation- When the date of court hearing is near, we take leave for completing the case diary.

[7] Translation- You have come to arrest me? Go! Come tomorrow!

[9] Translation- Whenever I hear Rama Shetty's name, I feel extremely angry as if someone has challenges my manliness.

[13] Translation- Who beats without taking caution that the man does not die.

[14] Translation- I had beaten carefully to make sure that no marks are left.

[15] Prof. B.B. Pande has shared this vision in one of his lectures at NLUD.