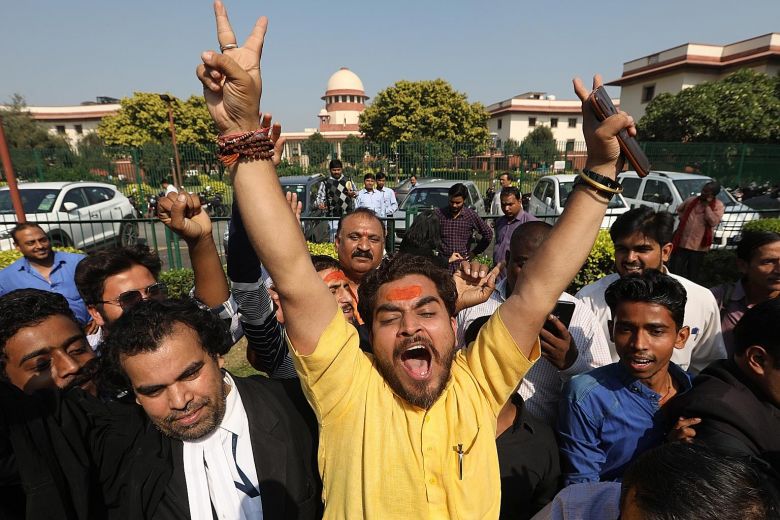 x
Devotees celebrating Ayodhya verdict (Image Courtesy : Strait Times)
The Court traveled back in time only for the limited purpose of examining the claims of possession, and not to adjudicate on an alleged historic wrong.

Going by some of the observations by the Supreme Court in the judgment in the Ayodhya-Babri Masjid verdict, it can be said that the verdict is not a legal precedent for supporting present day claims of ownership over existing structures on the basis of alleged historic wrongs by ancient rulers.

The Court observed in the 1045-pages judgment that historical wrongs committed by previous rulers cannot be corrected under the present legal regime established by the Constitution of India. Law is not the answer for the actions of ancient rulers, the five-judge bench which delivered the judgment said.

In paragraph 652 of the verdict, it is stated :

"This Court cannot entertain claims that stem from the actions of the Mughal rulers against Hindu places of worship in a court of law today. For any person who seeks solace or recourse against the actions of any number of ancient rulers, the law is not the answer. Our history is replete with actions that have been judged to be morally incorrect and even today are liable to trigger vociferous ideological debate".

In the next sentence, the Court adds that after the adoption of the Constitution, determination of rights and liabilities of persons cannot be based on their religious or cultural identity. The Court even seems to suggest that present Indians are descendants of several groups of people who migrated to this land at various points of history :

"However, the adoption of the Constitution marks a watershed moment where we, the people of India, departed from the determination of rights and liabilities on the basis of our ideology, our religion, the colour of our skin, or the century when our ancestors arrived at these lands, and submitted to the rule of law."

Elsewhere, the Court says that law cannot reach back in time to provide legal remedy to everyone who disagrees with the course of history.

"Human history is testament to the rise and fall of rulers and regimes. The law cannot be used as a device to reach back in time and provide a legal remedy to every person who disagrees with the course which history has taken. The courts of today cannot take cognisance of historical rights and wrongs unless it is shown that their legal consequences are enforceable in the present(paragraph 633)"

Having said so, a natural doubt arises : how did the Court permit the construction of the temple at the disputed site, where the mosque used to exist since 1528 till its demolition on December 6, 1992?

Before seeking answers to this, it is important to keep in mind a crucial aspect of the judgment. The Supreme Court's judgment is not based on the finding that the mosque was built after demolishing an existing temple. The Court observed that the reports of the Archaeological Survey of India did not present any conclusive finding that a temple was razed to build the mosque. The ASI reports indicated that the mosque was built over the ruins of a structure of Hindu origin which dated back to 12th century AD. However, the report was inconclusive as to whether the structure was a temple, or whether it was destroyed by human action. The Court suggested that the long gap of nearly four hundred years between the structure and the mosque construction makes it probable that the structure could have been destroyed due to natural actions.

Title must be decided on the basis of legal principles applying evidentiary standards governing civil trial, and not on the basis of archaeological findings, observed the Court in page 907.

Further, the Court stated that even if it is assumed that the underlying structure was a temple, it will not strengthen the claim of title by Hindu plaintiffs.

This conclusion is based on a legal principle that Courts cannot adjudicate claims based on the actions of previous rulers, unless the subsequent sovereign expressly recognized such claims.

"The Mughal conquest of the territories was a supra-national act between two sovereigns subsequent to which, absent the recognition by the new sovereign of pre-existing rights, any claim to the disputed property could not have been enforced by virtue of the change in sovereignty. This Court cannot entertain or enforce rights to the disputed property based solely on the existence of an underlying temple dating to the twelfth century."

The principle applied is based on the Constitution Bench decision of the top court in Promod Chandra Deb v State of Orisssa(1961) which held that Courts will only adjudicate on those rights and liabilities which have been recognized by the new sovereign either expressly or impliedly through conduct established by evidence.

The Court noted that the British, after the annexation of Oudh in 1856, had confiscated the disputed property and allowed both communities to offer their respective religious services there. So British had recognized the co-existing claims of both the parties in the place. Since the Constitution provides for continuity of British rule and Indian Republic (refer Articles 372 and 296), the private claims which existed during British regime are enforceable even after independence. The judgment said :

"The Constitution of India provides for a legal continuity between the British regime and the Republic of India. The conduct of the Republic of India subsequent to attaining Independence was to uphold private property claims that existed during the rule of the British sovereign. For the present purposes therefore, there is both express and implied recognition that the independent Indian sovereign recognised the private claims over property as they existed under the British sovereign unless expressly evidenced otherwise. Therefore, the rights of the parties to the present dispute which occurred during the colonial regime can be enforced by this Court today(para 651)".

In other words, the Court said that it can travel back to the history only to the extent where British recognized private rights and claims, as the Constitution links the present Indian State only up to the British regime and not prior to that.

The Court makes it clear by stating :

Yet another doubt arises at this juncture : Despite observing that the acts of the parties after 1856 formed the basis of claims, how could the Court favour the claim of possession of Hindu plaintiffs on the ground that Sunni Waqf Board could not prove uninterrupted possession of the property between 1528 and 1856?

The Court had to go into the question of possession between 1528 and 1856 because the suit by Sunni Waqf Board was based on the claim that Babri Masjid was dedicated as a place for Muslims to offer prayer in 1528. The Court held that the Board could not establish their own claim of continuous use from 1528 and found that Hindu plaintiffs established a better claim of historic possession and used. There are reservations expressed about the Court's appreciation of evidence on this point. It has been quite compellingly argued in this article in Scroll that the Court imposed different burdens of proof on Hindu plaintiffs and the Sunni Board on the issue of historic possession.

Anyhow, the focus of this article is not the merits of appreciation of evidence. The intention here is to stress that the relief to Hindu plaintiffs is not based on their claim that the mosque was built over a temple.

The Court has not concluded that a temple existed underneath the mosque. The verdict is based on evidence of competing claims of possession, though questions remain about the mode of appreciation of evidence. The Court traveled back in time only for the limited purpose of examining the claims of possession, and not to adjudicate on an alleged historic wrong.

So, the verdict is not a precedent for arguing that Courts can correct alleged acts of destruction of historic structures of faith by ancient rulers.

In this context it is pertinent to mention about a law enacted by the Parliament to maintain communal harmony by preventing the conversion of places of worship.

It is the Places of Worship (Special Provisions) Act, 1991 which was enacted by the Parliament with an aim to prohibit the forcible conversion of places of worship. Section 3 of the Act prohibits the conversion of a place of worship of any religious denomination, as it existed on August 15, 1947, into a place of worship of a different religious denomination. Violation of this provision is an offence punishable with imprisonment for a period of three years and fine.

The law was made in the backdrop of Ram Janambhoomi movement. However, the Act is not applicable to the Ayodhya dispute. Section 5 of the Act contains an exemption from the application of its provisions to the "Ram Janam Bhumi-Babri Masjid" site and to any suit, appeal or proceeding relating to it.

The Ayodhya verdict endorses this Act by saying that it was enacted to preserve secularism, a basic feature of the Constitution. It is observed in the judgment :

The Court added that the Act emphasizes that "history and its wrongs shall not be used as instruments to oppress the present and the future".

"The Places of Worship Act is intrinsically related to the obligations of a secular state. It reflects the commitment of India to the equality of all religions. Above all, the Places of Worship Act is an affirmation of the solemn duty which was cast upon the State to preserve and protect the equality of all faiths as an essential constitutional value, a norm which has the status of being a basic feature of the Constitution. There is a purpose underlying the enactment of the Places of Worship Act. The law speaks to our history and to the future of the nation. Cognizant as we are of our history and of the need for the nation to confront it, Independence was a watershed moment to heal the wounds of the past. Historical wrongs cannot be remedied by the people taking the law in their own hands. In preserving the character of places of public worship, Parliament has mandated in no uncertain terms that history and its wrongs shall not be used as instruments to oppress the present and the future"

Quite notably, the SC overruled the observations made by Justice D V Sharma in the dissenting judgment of Allahabad High Court regarding this Act. Justice Sharma had observed that the Act does not debar those cases where declaration is sought for a period prior to the Act came into force or for enforcement of right which was recognized before coming into force of the Act.

The SC observed that the observations by Justice Sharma are against the statutory scheme under Section 4(1) and also "constitutional values". In the words of the apex court :

"The observations made on the Places of Worship Act by Justice D V Sharma are contrary to the scheme of the law as they are to the framework of constitutional values(paragraph 84)".

A strict and swift implementation of this Act can take the steam off the movements which seek to create communal unrest by raising claims of ownership over existing structures on the basis of alleged historic wrongs.