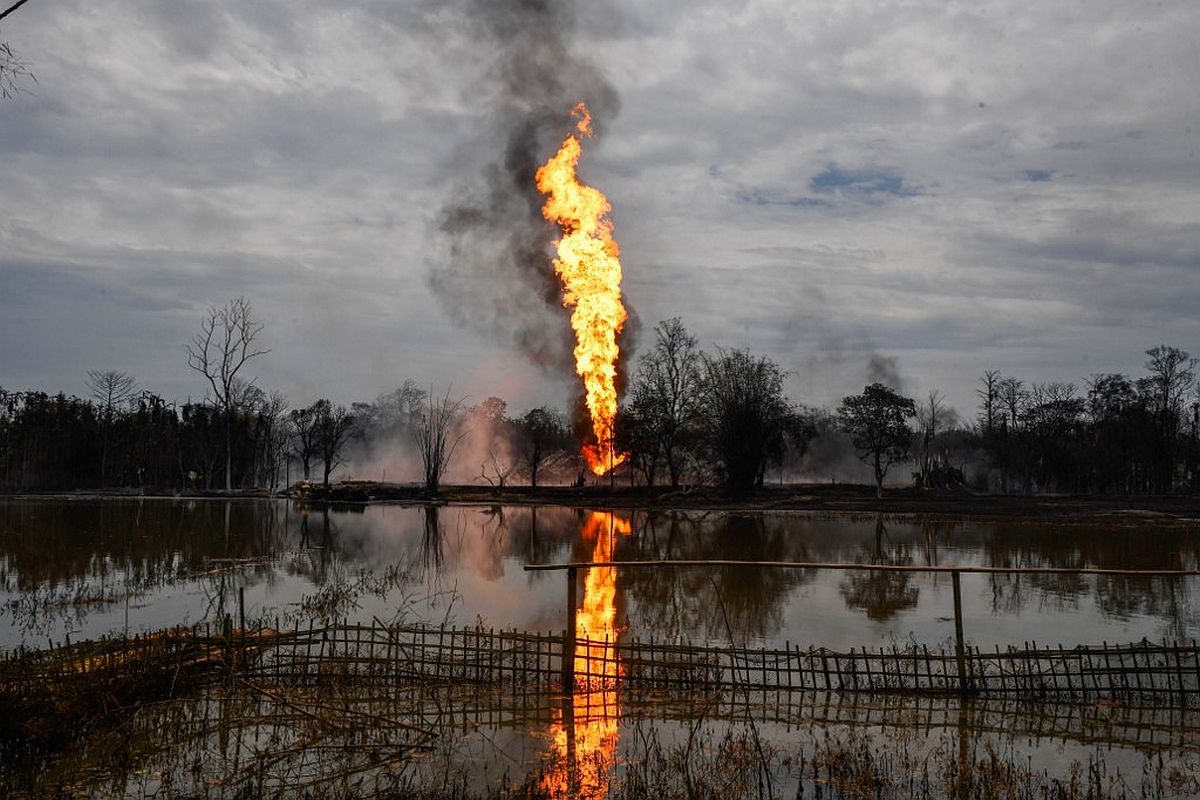 The Oil India Limited (OIL) announced on 20 May 2020 that the Ministry of Environment, Forest and Climate Change (MoEF) had given it clearance for extension drilling and testing of hydrocarbons in seven locations under Dibru Saikhowa National Park area and North-West of Baghjan in the Tinsukia district of Assam. In less than a week, there was a blowout in its oil well in Bhaghjan 5....

The Oil India Limited (OIL) announced on 20 May 2020 that the Ministry of Environment, Forest and Climate Change (MoEF) had given it clearance for extension drilling and testing of hydrocarbons in seven locations under Dibru Saikhowa National Park area and North-West of Baghjan in the Tinsukia district of Assam. In less than a week, there was a blowout in its oil well in Bhaghjan 5. The unchecked leakage led to a huge fire in the oil well on 9 June 2020, killing two fire fighters. Nearly three thousand people have had to be evacuated from the nearby villages. The Dibru Saikhowa National Park, which is at an aerial distance of only 900 metres, was terribly impacted. There are reports of death of the endangered Gangetic dolphin, a variety of fishes along with a huge number of migratory birds and stray animals. This, notwithstanding the assurances made by OIL that there would be no damage to the wildlife and the endangered species in the National Park.

It may be recalled that the Guidelines for Declaration of Eco Sensitive Zones around National Parks and Wildlife Sanctuaries were formulated during the XXI meeting of the Indian Board for Wildlife. The MoEF also came up with the National Wildlife Action Plan (2002-2016). The Plan, whose objective was to delineate the Eco Sensitive Zones (ESZ) in order to ensure the protection of wildlife around the national parks and wildlife sanctuaries, provided that "(t)he areas outside the protected area network are often vital ecological corridor links and must be protected to to prevent isolation of fragments of biodiversity which will not survive in the long run. Land and Water use policies will need to accept the imperative of strictly protecting ecologically fragile habitat and regulating use elsewhere." The Guidelines also stated that if the sensitive corridors went beyond the estimated width of 10km of the ESZ, the ecologically important patches in the extended area must be included in the ESZ.

OIL has been drilling in the vicinity of the Dibru Saikhowa National Park since 2006 and owns around 25 drilling wells in the area. This is in direct contravention of the Guidelines and the National Wildlife Plan introduced by the Board and the Ministry. Moreover, The Eco Sensitive Zone of Dibru Saikhowa was notified this year which stated that the radial distance from the Park varies from zero to 8.7 km. The Baghjan 5 well of OIL is at a distance of less than a kilometre from the wetlands at the southern end of the Park, a part of the ESZ.

The Manufacture, Storage and Import of Hazardous Chemical Rules, 1989 were laid down to prevent chemical accidents from industrial activities and mitigate impacts of the accidents. Rule 4 lays down the general responsibility of the occupier during industrial activity and Rule 13 directs to ensure a preparation of on-site emergency plan. The oil drilling company seems to have ignored both the rules which might be the reason for the gas leak. The employees had noticed a damaged spool when the tragedy stuck. For replacing the spool, the Blow Out Preventer (BOP) was removed from the well. According to the experts present at the site, the blowout could have been prevented if the early signs from the well were noticed on time.

Further, the Environmental Impact Assessment (EIA) Rules of 2006 mandates public hearing of Category A projects. The drilling project by OIL is considered as Category A project under the EIA notification. However, there are no records of public hearings conducted for the assessment. The local people have been against the operation since its inception but have never been heard by the authorities. Such state of affairs reminds one of Supreme Court decision in the Lafarge Umiam Mining Case (2011). The Court had emphasized on 'sustainable development' while observing that environmental clearance must be based on 'doctrine of proportionality'. The clearance must be based on the legislative policy that governs the activity and the principles of natural justice. The decision also highlighted the need for public hearing. Public participation provides valuable input in deciding for the correct site for such an operation. It is regrettable that almost a decade later no lessons have been learnt. The Central and State government and also the statutory institutions seem oblivious to importance of making the right assessment and ensuring sustainable development. The operation continued despite the strong disapproval of the National Board of Wildlife voiced by its Standing Committee during its visit in 2013. The Board had robustly criticized OIL for seeking post-facto clearance after having already started the work without prior permissions. Even the recent clearance by the Ministry on 20 May 2020 was met with an uproar by the locals, but to no avail. The establishment of a hazardous industry in proximity to the National Park is itself a questionable action which got approved by the ministry. Hazardous substances are defined in section 2(e) of the Environment (Protection) Act, 1986 as "means any substance or preparation which, by reason of its chemical or physico-chemical properties or handling, is liable to cause harm to human beings, other living creatures, plants, micro-organism, property or the environment". Despite the fact that, the oil drilling operation by the company deals with hazardous substances, it continues to operate and affect diversity of living organisms in and around Dibru Saikhowa.

The Environment (Protection) Act, 1986 mandates the protection and improvement of the environment and provides the modalities for such purpose. The entire drilling project of OIL is a product of poor Environmental Impact Assessment, low maintenance, lack of attention and industrial greed. The gas leak followed by the fire has caused irreplaceable loss to the rich biodiversity of the National Park, apart from endangering the lives of the villagers who are also at the verge of losing their houses and cattle. The presence of OIL in the Dibru Saikhowa area continues to pose a threat to the endangered species and the habitat.

The National Green Tribunal also has the power to take suo moto cognizance against the defaulters. After the recent gas leak at Vizag, the Tribunal had observed that " NGT has the purpose and power to provide relief and compensation to victims of environment damage, restitution of property, and restoration of environment. To effectuate this purpose, NGT has wide powers to devise its own procedure. In appropriate circumstances, this power includes the power to institute suo-motu proceedings and not keep its hands tied in the face of drastic environmental damage and serious violation of right to life, public health and damage to property," . Under Section 15 of the NGT Act, the Tribunal has the power to provide relief, compensation and restitution to the victims of pollution and environmental damage that has occurred under the enactments specified in the Schedule I. OIL has announced that it will resume operations in around four weeks. Urgent remedial steps need to be taken before that to review the clearances given to OIL and affix responsibility on the erring parties on the principle of absolute liability for their acts and omissions.