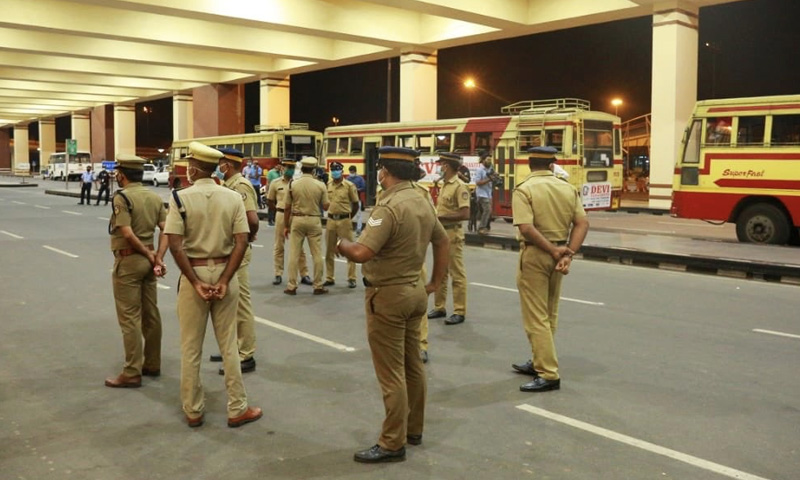 Killing of George Floyd by police officers of Minneapolis, USA has triggered massive world – wide protests. The question of racial inequality, without doubt, is the central narrative but what it has also laid bare is the callous attitude of police towards general public. A complete lack of apathy and use of brute force was in front of the whole world to witness. India is no stranger...

Killing of George Floyd by police officers of Minneapolis, USA has triggered massive world – wide protests. The question of racial inequality, without doubt, is the central narrative but what it has also laid bare is the callous attitude of police towards general public. A complete lack of apathy and use of brute force was in front of the whole world to witness. India is no stranger to police brutalities. In the past few months, police has become much maligned due to their handling of anti-CAA protests, ensuing riots in Delhi and beating of marching migrants across India during Covid times.

The distrust between public and police is growing at a time when the role of police is shifting from not just being a law enforcing agency to becoming a service provider and enabler. It is, therefore, important to look at police–public relations, the breakdown of trust and community policing as a solution.

Indian police was designed by the British to serve their empire. The structure of police has remained largely unchanged even though the country became independent and most institutions have undergone massive transformation. With time, police – public relations have gained acceptance in law enforcement establishments. Theoretically, it can be understood as a process of establishing and maintaining mutual understanding and cooperation between police and public, through effective two – way communication. Practically, police cannot operate effectively without willing cooperation and support of the very public, whom it is entrusted to serve, defend and protect. Police often require citizen involvement, public participation and community relations for effective discharge of their duties, whether it is crime prevention, investigation, nabbing a dreaded criminal or controlling law and order situations during protests, bandhs, strikes etc.

Growing distrust between police and public

A first of its kind study on policing, conducted by Centre for the Study of Developing Societies (CSDS) in 2019 revealed that the poor, marginalised, minorities and women tend to fear and feel alienated from

the police. Men and upper classes reported greater contact with the police compared to women and the poor. More than half of the respondents felt that the police treated the rich better than the poor, a clear reflection of a feeling of discrimination. It was also found that there is a decrease in representation of SC/ST, OBCs and minorities in police force. In criminal cases, the poor were found to be twice more likely to be contacted for investigation by the police, as compared to the rich.

Abuse of power further erodes the public's trust in police. Fear of getting wrongfully arrested, beaten up and sexually harassed is common. These fears are based on the perception of police being discriminatory and oppressive in behaviour. This could be an underlying reason for reduced trust in police among the lower sections of society.[i]

Efforts made so far

Since independence, numerous committees and commissions have recognised the need to get rid of the colonial legacy and rebuild a police force equipped to meet the changing dynamics of Indian society. The Second Administrative Reforms Commission Report (2006) has noted that police – public relations are in an unsatisfactory state because people view the police as corrupt, inefficient, politically partisan and unresponsive. Second report of the National Police Commission (1980) recommended that the police should duly recognise, and be trained and equipped to perform the service – oriented role in providing relief to people in distress situations. The Supreme Court, in a landmark judgement 'Prakash Singh & Ors vs Union of India' (2006) issued seven – step guidelines aimed at systemic police reforms. Besides establishment of a Police Establishment Board, fixed tenure for DGPs, a State Security Commission, the Court also recommended constitution of Police Complaints Authorities (PCA) at state and district levels to inquire into allegations of serious misconduct and abuse of power by police personnel[ii] However, most of these directions remain largely ignored and eight states are yet to constitute PCAs.

Community policing as a solution

Community policing can be step towards improving the relations between police and public. Community policing is both a philosophy and an organisational strategy aimed at policing in active consultation, cooperation and partnership with community at large. It is based on the principle that the gap between police and citizens should be minimized to an extent that the policemen become an integrated part of the community they serve. It is aimed at a decentralised approach that involves community members and the local beat level constable. It is an essential model in order to foster harmony, trust and transparency between the police and public.

Legislatively, the first effort in this direction was the Karnataka Village Defence Parties Act, 1964, which introduced the institution of 'Dalpathi' as the interface between the police and rural community.[iii] Many states followed with their own models of community policing.

In Kerala, Janamaithri Suraksha project was introduced in 2008 to facilitate greater accessibility and closer interaction between police and local community. In Covid times, through this project, the policemen were able to reach out to large parts of community for monitoring, contact tracing, reaching out to senior citizens and creating health and hygiene awareness.

The Meira Paibi (torch bearers) in Assam is a project through which the women help in improving law and order problem, especially drug abuse. They light their torches and go around their neighbourhood guarding the entry – exit points after sunset, to prevent their youth from wandering out.

In Delhi, the Special Police Officers (SPOs) have acted as a bridge between the police and community since the 1980s. In some areas, Nagrik Suraksha Samitis were organised for local harmony. Resident Welfare Associations (RWAs), local traders group, thana level committees have actively participated with police for prevention of crime in their respective areas.

Community policing assigns responsibility to individual participation. In covid times, active involvement of community can help the police in better discharge of their duties, which now clearly go beyond just crime prevention.

However, caution needs to be exercised while expanding community policing efforts. It should not lead to vigilantism and mob justice. The experiment of 'Salwa Judum', which involved arming of local tribal youth to fight Naxals in Chhattisgarh should be kept in mind. In 'Nalini Sundar & Ors vs State of Chhattisgarh' (2011), the Supreme Court rightly ordered ceasing of the programme and held it to be violative of Article 14 and 21 of the Constitution.[iv]

Police – public relations are a twofold process. At a time when police are at the frontline of fight with Covid, they also need the support and cooperation of public. Hundreds of policemen have contracted the virus, most of them are not equipped with PPE kits and are working odd hours. The barbarity in Punjab, where the hand of a policeman was chopped off is still fresh in mind.

Going back to the backlash over killing of George Floyd, the city council of Minneapolis recently resolved to dismantle their entire police department and restructure it. While local city councils in India do not have that kind of power, there is a definite need for change in training of our police forces. From the time old law and order and crime centric approach, there has to be a shift towards service oriented, public themed approach that facilitates community policing and greater trust. Long pending police reforms need to be pushed and the police must transform from being a force into a public service.