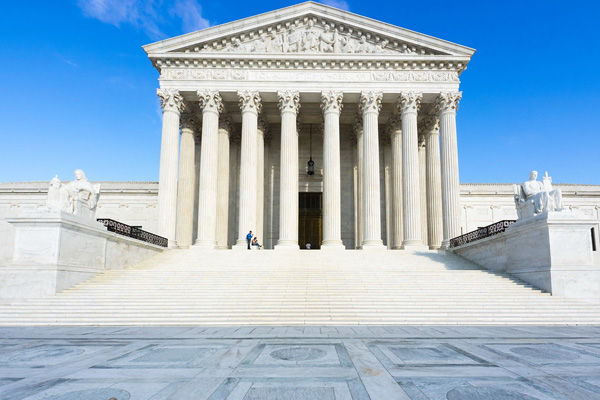 A recent amicus brief (which is a legal brief filed by an organization or individual not party to the case but provides additional or relevant information with a view to assist the Court) in the Supreme Court of the United States (SCOTUS) is making the rounds because of its hilarious but impactful writing. However, before indulging in the contents of the brief, we must know what gave rise to it and who filed it?

The brief has been filed by an American digital media company called 'The Onion', which specialises in parodying events and writing satirical articles. For example, this is what they said in an article titled 'Influential Women in politics' about Ms. Indira Gandhi, "Gandhi served as the Prime Minister of India from 1966 until 1977, again from 1980 until her assassination in 1984, and will serve a third time upon her miraculous return from the afterlife in 2023 until 2028" this about Angela Merkel "Chancellor since 2005, Merkel's diligent, pragmatic leadership style has made the world almost too comfortable with the idea of Germany taking control of Europe." and this about Kim Yo Jong "The sister of dictator Kim Jong-un plays an influential role in the North Korean government and has risen high enough in the ranks to be the next family member in line to be executed by her brother". No need to go further, you get the point.

Now, the circumstances surrounding the brief are that in 2016, a man named Novak made a Facebook Community page parodying his local police department for which his house was raided, and he was kept in jail for four days. However, he was later acquitted. Mr. Novak then approached the Appeals Court alleging that his freedom of speech was violated and stifled but the Court sided with police (mostly because of a legal doctrine called qualifiedimmunity). The matter has now reached the SCOTUS, this is where 'The Onion' has entered the picture.

In their own words, the brief stated that "The Onion cannot stand idly by in the face of a ruling (talking about the Appeal Courts decision) that threatens to disembowel a form of rhetoric (parody) that has existed for millennia, that is particularly potent in the realm of political debate, and that, purely incidentally, forms the basis of The Onion's writers' pay checks."

The brief also points to the unique nature of parody by stating that this form of humour requires that the parodist gets as close to the reality as possible , so that the reasonable reader in the first glance is unable to tell the difference. And upon realising their own gullibility, can laugh at it. Also, that a disclaimer prior to a parody would defeat the form itself.

The brief went on to demonstrate for SCOTUS what requirements are essential for a parody by citing their own 1997 headline involving the Court itself, they stated that :-

Parody leverages the expectations that are created in readers when they see something written in a particular form. This could be anything, but for the sake of brevity, let's assume that it is a newspaper headline—maybe one written by The Onion—that begins in this familiar way: "Supreme Court Rules . . . " Already, one can see how this works as a parodic setup, leading readers to think that they're reading a newspaper story. With just three words, The Onion has mimicked the dry tone of an Associated Press news story, aping the clipped syntax and the subject matter. The Onion could go even further by putting that headline on its website—which features a masthead and Latin motto, and the design of which parodies the aesthetics of major news sites, further selling the idea that this is an actual news story. Of course, what moves this into the realm of parody is when The Onion completes the headline with the punchline—the thing that mocks the newspaper format. The Onion could do something like: "Supreme Court Rules Supreme Court Rules.". The Onion could push the parody even further by writing the joke out in article format with, say, a quote from the Justices in the majority, opining that, "while the U.S. Constitution guarantees equality of power among the executive, legislative, and judicial branches, it most definitely does not guarantee equality of coolness," and rounding off by reporting the Supreme Court's holding that the Court "rules and rules totally, all worthy and touched by nobody, in perpetuity, and in accordance with Article Three of the U.S. Constitution. The ability of the President and Congress to keep pace with us is not only separate, but most unequal."

The brief showed its support for Mr. Novak by pointing out how his Facebook page was obviously a parody even though it mimicked the real thing, The Onion in their brief succinctly stated that :-

"Just to be clear, this was not a close call on the facts: Mr. Novak's spoof Facebook posts advertised that the Parma Police Department was hosting a "paedophiles reform event" in which successful participants could be removed from the sex offender registry and become honorary members of the department after completing puzzles and quizzes; that the department had discovered an experimental technique for abortions and would be providing them to teens for free in a police van; that the department was soliciting job applicants but that minorities were "strongly encouraged" not to apply; and that the department was banning city residents from feeding homeless people in "an attempt to have the homeless population eventually leave our City due to starvation.". True; not all humour is equally transcendent. But the quality and taste of the parody is irrelevant. …….And there is no real doubt that reasonable readers would have no difficulty in ascertaining that Parma's finest (the police department) were not actually providing free abortions to teens in a police van, pardoning child sex offenders on the basis of their adeptness at puzzles, or intentionally starving the homeless."

The brief is filled with these gems and shows the power of parody and humour in uncovering absurdity and challenging authority. It is also an essential read for anybody who is getting increasingly tired of the monotonous nature of drafting, to rejuvenate yourself and encounter the possibility of being innovate in law.