Can We Really Police Our Police? 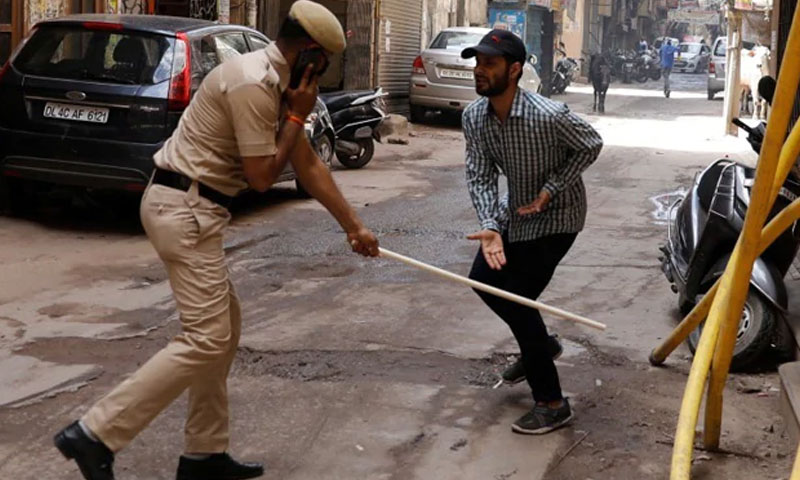 The global protests against death of George Floyd in America has not taken many people by surprise. It only validated a worldwide phenomenon of 'police brutality' especially states with a history of colonial conquest. Instances similar to George Floyd are also very familiar to us in India. Yet the reactions are vastly different here; malicious police violence is not enough to get us out...

The global protests against death of George Floyd in America has not taken many people by surprise. It only validated a worldwide phenomenon of 'police brutality' especially states with a history of colonial conquest. Instances similar to George Floyd are also very familiar to us in India. Yet the reactions are vastly different here; malicious police violence is not enough to get us out on the streets. The custodial deaths of father and son in Tamil Nadu has shaken the conscience of many people and raises the question 'can we really police our police'? On 19 June, 2020, the Tamil Nadu police arrested P Jayaraj, 59, and his son J Fennix Immanuel, 31, at Thoothukudi for allegedly violating the lockdown rules, by keeping their mobile accessory shop open beyond prescribed hours and defying the night curfew. As per the media reports, they were taken to the police station and were booked under several sections of the Indian Penal Code including section 188 of the IPC. It is alleged by the family of the deceased that both were brutally beaten by administering third degree torture. The media reports also suggest that they were sexually assaulted in the police custody. Later, after medical examination they were produced before the local judicial magistrate who sent them to the judicial custody on 20 June. Immanuel died of breathlessness on 22 June while his father passed away a day later.

The family alleged that both were subjected to severe custodial torture, resulting in rectal bleeding and eventual death. These deaths sparked protests not only in Tamil Nadu but in many parts of the county. Many human rights organizations have demanded strict action against the policemen who tortured them. Following an uproar, two FIRs were registered without naming any police official for murder or culpable homicide not amounting to murder. Customarily, four policemen were suspended from service but realizing the severity of crime, the Madurai Bench of the Madras High Court took suo motu cognizance of the incident and decided to monitor the magisterial probe. It asked for a status report from the police and also directed that the autopsy report be video-graphed. The State Government has now decided to transfer the investigation to the Central Bureau of Investigation if the Madurai Bench permits it. This incident has traumatized all those who respect the rule of law and personal liberty in the country.

The Police overreach is not new, of course. The United Nations experts recently stated that they were "extremely concerned" about an epidemic of extrajudicial killings by Uttar Pradesh police, known locally as "encounters," in the name of self-defence. Indian police are well known for gratuitous beatings, custodial torture, custodial deaths, fake encounters and other blatant state violence. Paradoxically, Indian police system under Indian Police Act, 1861 continues to have colonial coercive machinery which was modelled on Irish colonial paramilitary police. We had a historic break from dreadful past when we drafted our Constitution which guaranteed a set of fundamental rights including the most precious life and liberty. But we failed to eliminate the colonial attitude of our police and allowed it to continue with same archaic law such as the Indian Police Act. Further, prohibition on the prosecution of public officials without the prior sanction of the state as stated in Sections 132 and 197 of the CrPC 1973 has exhilarated Indian police to indulge in power overreach.

It is pertinent to mention that the Supreme Court of India which has kept individual dignity as a focal point, has always been very sensitive to the issues of police brutalities. In Prakash Kadam v. Ramprasad Vishwanath Gupta (2011), the Supreme Court observed that "Policemen are persons who are supposed to uphold the law. In our opinion, if crimes are committed by ordinary people, ordinary punishment should be given, but if the offence is committed by policemen, much harsher punishment should be given to them because they do an act totally contrary to their duties." In Re Inhuman Conditions v. State of Assam (2017), the Supreme Court observed as follows: "There are several such cases – documented and undocumented - all over the country but in spite of repeated decisions delivered by this Court and perhaps every High Court there seems to be no let-up in custodial deaths. This is not a sad but a tragic state of affairs indicating the apparent disdain of the State to the life and liberty of individuals, particularly those in custody. The time to remedy the situation is long past and yet, there seems to be no will and therefore no solution in sight."

In Prakash Singh case (2006), the Court issued six major guidelines regarding implementation of the police reforms based on the recommendations of the NPC and directed the Central and State Governments to implement them. But these guidelines were mainly aimed at providing autonomy from motivated political interference only and neglected police accountability to the public especially on the issue of human rights violations by the police. In 2018, the Supreme Court asked the governments to implement the police reforms by separating the investigation wing from the law and order branch. It also directed to establish a complaints authority to look into the human rights violations including custodial deaths and abuse of authority by the police people. Sadly, the state governments do not seem to be serious to implement the police reforms. And unreformed Indian police system has shown itself to be pliable and amenable to political manipulation. The police power becomes a tool in the hands of the state to demonstrate their political authority particularly against their rivals. Police while discharging its duties such as arrest, search, and interrogation routinely indulges in arbitrary exercise of powers. The Magistrates also grant remands routinely which is not a good signal for liberty jurisprudence. The Magistrates need to be more sensitive while deciding the remand applications. The National Judicial Academy should organize special training programmes for the judicial magistrates on these kinds of issues. In recent case, the family members of the deceased have alleged that the Judicial Magistrate indiscriminately had given the father and son in police custody without due process. It is duty of the Judicial Magistrate to examine the accused thoroughly and apply his mind before granting the custody. He cannot act casually as per the narrative of the police. He has to look into the case thoroughly.

Article 21 of the Constitution has a wider aura and the custodial violence and other police brutality negates it. It goes against the basics of ethics, culture, and human rights jurisprudence. Custodial deaths violate not only democratic fabric and human rights aura but badly undermines the rule of law and constitutionalism as envisaged in our supreme law of the land. There is no place for these inhumane practices in our country. Time has come when we should have zero tolerance for custodial violence. What is required is not just reforms in the organisational structures of centralised police and paramilitary forces but some rethinking to modernise laws such as the Police Act. Only this can ensure protection of the human rights of the people at the bottom who often become victims of lawless police violence and misdemeanour. The police officials found indulged in human rights violations, particularly the custodial deaths should be promptly and severely punished so that others could not dare to repeat such violations. Let others take a lesson from this incident. There should be no place for police brutality in this land of Bapu.

The problem is also closely linked with behavioral attitude of police officers. Somewhere they need proper training of crowd controlling and dealing with human rights aspects. The States should also send them for psychological counselling periodically. Their working hours need to be minimized so that they could also spend some time with their families and friends. Needless to say, the police people work for long hours in difficult circumstances. It affects their thinking and working efficiency adversely. During the Covid crisis, many police people have lost their lives in a fight against Covid. The people of the country have appreciated their efforts and sacrifice. But they have no right to punish people on their own. If someone is found guilty of lockdown norms, it is the court of law that would look into the matter and punish the offender as per the law. The police cannot take law in their hands. This is a very difficult time and the police should understand it deeply. All of us are victims of this unprecedented crisis in human history. We have to fight against the COVID together. The people should also cooperate with the police personnel to make the lockdown successful. The police must conduct criminal investigation professionally with the aid of scientific tools. The police should not treat offenders like personal enemies. The police have to develop a professional attitude and respect for the human rights. After all, who will police the police?