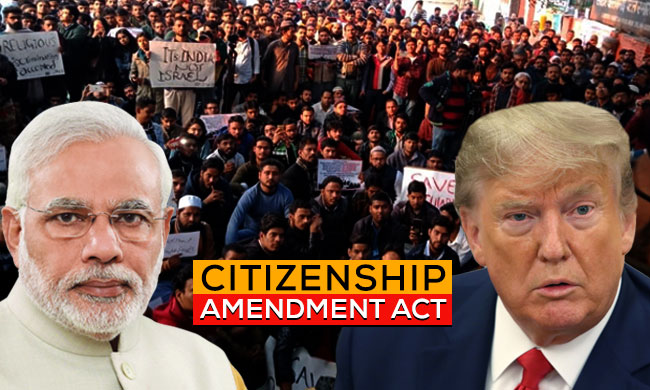 x
There are some parallels between CAA and Trump's travel ban.

The Citizenship Amendment Act, 2019 (CAA) was promulgated by Indian parliament received the Presidential assent on 12th December 2019. The Act amends Section 2(1)(b) of the Citizenship Act – which defines 'illegal immigrants' – by excluding "persons belonging to minority communities, namely, Hindus, Sikhs, Buddhists, Jains, Parsis and Christians from Afghanistan, Bangladesh and Pakistan" from the ambit of "illegal immigrants" if they entered India on or before 31st December 2014 and makes them eligible to seek citizenship based on naturalization.

This new legislative action undertaken by the Central Government under the guise of upholding India's 'humanitarian values' is yet another example of Constitutional dissonance. The Act must be read in the context of a proposed act of government i.e. The National Register of Citizens (NRC) wherein each citizen of India will have to prove their citizenship by providing documentary evidence, failing which the person will be declared 'illegal migrant'. This NRC 2.0 is an extended version of NRC 1.0 which was only for the State of Assam to drive out 'illegal Bangladeshi Muslim migrants' and was monitored by the Supreme Court of India.

The Citizenship Amendment is advanced to protect people fleeing persecution from three neighboring countries having a state religion (Islam) and thus, minorities from these states shouldn't be considered as 'illegal migrants' if they decide to come to India without valid travel documents. This focus on persecution, sovereignty and borders isn't new for world leaders in the era of populism and right-wing politics. Donald Trump after resuming his office in 2017 signed multiple executive orders including Travel Bans to give effect to actions that were opposite to what the Indian government plans to give effect at present.


The first travel ban issued in January 2017 prohibited entry of people having valid visas and green card into the United States who belonged to seven predominantly Muslim countries (Iran, Iraq, Libya, Somalia, Sudan, Syria, and Yemen) for 90 days. The ban was yet another opportunity by the US government to assert its sovereignty and build on the 'illegal immigrants' narrative to push for the construction of a Wall. However, the ban was countered by massive protests by civil society and civil liberties organizations. Lawyers and law students charged into the Courts to challenge the executive order on the grounds of violation of the US Constitution and its international law obligations as a result of which multiple Circuit Courts blocked the executive order and it forced the government to withdraw its Ban 1.0. However, Mr. Trump issued Travel Ban 2.0 two months later wherein Iraq was dropped from the list and the rest of the features of the first travel ban continued in operation which continued to be against nationals of 'Muslim Countries'.

Similarly, the Citizenship Act excludes individuals who are practicing Muslims from the mentioned three neighboring countries to enter India without being labeled as 'illegal migrants' even though they might be fleeing their country due to the fear of persecution. This exclusion is facilitated by two classifications made within the Act, the one based on religion (where six other religions are granted protection) and another one based on country (restricted to only Afghanistan, Bangladesh, and Pakistan). Such classification not only goes against the basic tenets of the Constitution namely, right to equality, the prohibition of discrimination, right to life and freedom of religion incorporated under Article 14, 15, 21 and 25 but runs counter to the very idea of religion-neutral citizenship which India as an independent country adopted through its Citizenship Act, 1955. The passage of the Citizenship Amendment Act also violates India's international treaty and customary law obligations as highlighted by the United Nations High Commissioner for Human Rights (OHCHR) in its statement on 13th December 2019 and calls the Bill fundamentally discriminatory.

It must be noted that any person who flees their country due to fear of persecution is protected under international law as a 'refugee' and thus, the status of person fleeing from three neighboring country because of religious persecution would be that of a refugee under international law unless they are assimilated into the country as a citizen. Although India is not a party to the 1951 Refugee Convention or its 1967 Protocol unlike the USA who is a party to the Protocol, the principle of non-refoulement has been accepted as a norm of jus cogens i.e. customary international law norm which is applicable to even non-parties and from which no derogation is permissible. Therefore, India is bound to respect the principle of non-refoulement.

The Convention under its Article 3 of 'Non-Discrimination' provides that "The Contracting States shall apply the provisions of this Convention to refugees without discrimination as to race, religion or country of origin". In other words, while the Convention through its principle of non-discrimination doesn't oblige states to treat all groups of refugees equally, it prohibits the state from differentiating between groups explicitly based on grounds provided under Article 3, which includes religion and country of origin. While the Act arbitrarily decides on accepting refugees from only three countries based on 'shared migration history', the inclusion of Afghanistan in the same list raises questions. Further, the absence of Sri Lanka and Myanmar where Tamil Eelam and Rohingyas have been victims of state-sponsored religious persecution hits at the objective sought to be achieved by the Act. In the light of the same, the negotiating history of the Convention becomes important as discrimination between refugees from a culturally related neighboring country and refugees from a more distant and alien country was explicitly dropped and was held to violate the Convention. Thus, even if the Indian government argues a lack of 'cultural-geographic' connection with the rest of the neighboring countries, it falls short of the protection framework of the 1951 Convention which prohibits nationality-based exclusion.

In fact, the duty of non-discrimination isn't restricted to people who are within Indian territory but extends to persons seeking to enter India. Thus, if Tamil Eelams or Rohingya community members flee their country because of religious persecution and seek entry into Indian territory while the Central government allows entry of Hindus from Pakistan, it will violate the principle of non-discrimination. Moreover, since Article 3 protection applies to the Convention as a whole, the refugees can't be expelled back to their countries as non-discrimination governs the principle of non - refoulement as well.

Further, UDHRs non-discrimination obligation (Article 2 and 7) has been elevated to the status of customary international law and application of UDHR within the Indian Constitution remains unambiguous. (Maneka Gandhi v. Union of India). Further, the International Convention on the Elimination of All Forms of Racial Discrimination (ICERD) which was ratified by India in 1968 prohibits discrimination based on 'national origin' under Article 1. Although Art. 1(3) provides state to have a differential treatment based on citizenship or immigration status but the General Recommendation 30 of 2004 issued by The Committee on the Elimination of Racial Discrimination (CERD) holds that such action will constitute discrimination if the criteria for such differentiation, judged in the light of the objectives and purposes of the Convention, are not legitimate and proportional to the aim. Thus, exclusion of potential 'Muslim' refugees and those not belonging from the mentioned three countries fail to satisfy the test of necessity to further protection due to religious persecution.

Similarly, Article 26 of the International Covenant on Civil and Political Rights (ICCPR) provides that "all persons are equal before the law and are entitled without any discrimination to the equal protection of the law" and prohibit discrimination based on religion, national or social origin amongst other grounds. India became a party to the ICCPR in 1974 and its application by Indian Supreme Court for domestic law interpretation has been affirmed in multiple judgments (Vishaka v. State of Rajasthan; Vellore Citizens Forum's Case). Thus, any action by the Indian government cannot be against obligations flowing from ICCPR. However, ICCPR provides for general obligation on non-discrimination and allows for 'reasonable classification' but the same should be legitimate and proportional as in the ICERD.

The Trump administration coming under heightened attack on the grounds of discrimination added Venezuela and North Korea (Travel Ban 3.0) to the list so as repackage their patently discriminatory policy based on religion to that of national security. Consequently, in June 2018 the US Supreme Court disappointingly upheld the Travel Ban by 5-4 majority in the matter of Trump v. Hawaii. Back home, the Citizenship Amendment Act was passed in the parliament rejecting all the proposed amendments raised by the members of the opposition through a 'voice vote' and even the demand to send Bill to the Select Committee was rejected flouting the established parliamentary norms. Now the question is whether the Indian Supreme Court "[w]ill hold the coordinate branches (Legislature) to account when they defy our most sacred legal commitments." [Dissenting opinion by Justice Sotomayor and Ginsburg]
Views Are Personal.
Tags#Citizenship Donald trump #PM Narendra Modi Citizenship Amendment Act 2019 CAA Protests #Citizenship Act 1955
Next Story
Similar Posts
+ View more
Law Firms
+ More