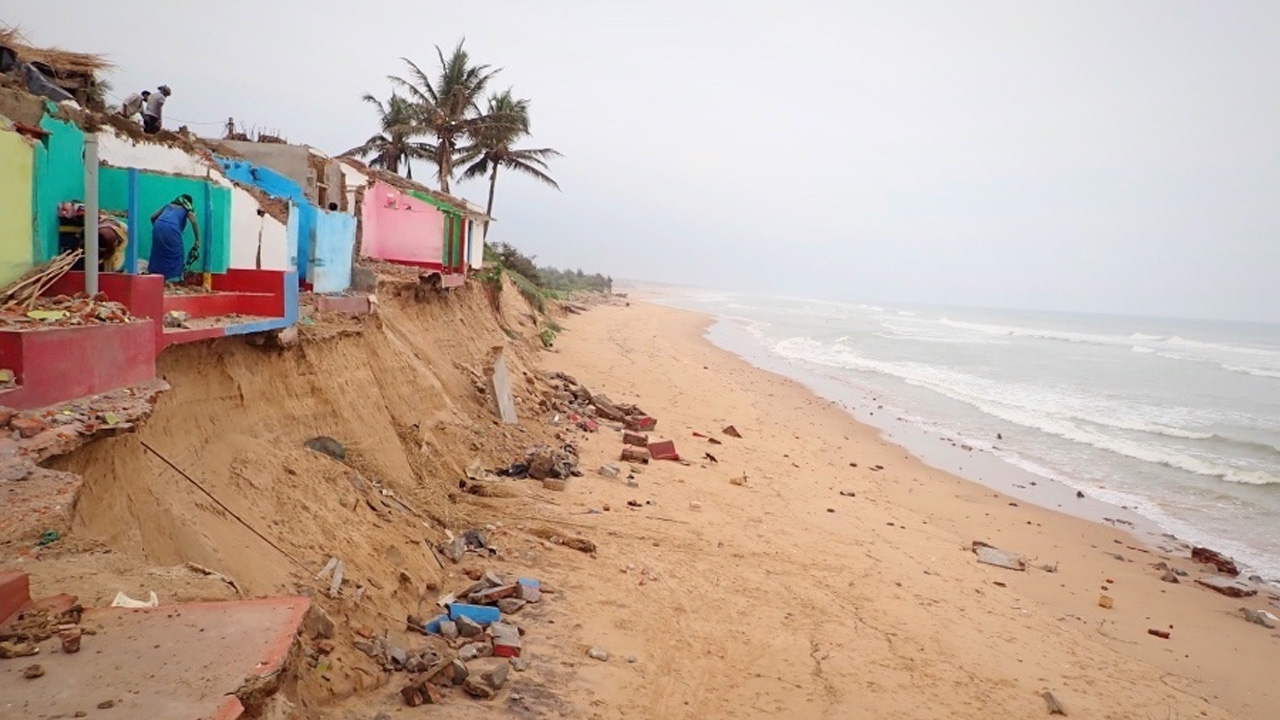 According to the Global Risks Report, 2022 published by the World Economic Forum, climate action failure is amongst the top three most severe environmental risks and amongst the five most critical long-term threats to the world as well as the most potentially damaging to people and planet over a 10-year horizon. A 2021 assessment report by the Intergovernmental Panel on Climate Change or IPCC drafted by over 200 scientists from over 60 countries, says that a rise of 1.5 degree Celsius in global temperature is imminent in near future and will lead to drastic effects in the ecosystem like severe heat waves exposing ~ 2.3 billion people, draughts and floods, submerging of coasts by rising seas, wiping of coral reefs by ocean changes, and loss of species.

Are We Doing Enough To Address This Ticking Bomb Of A Threat?

The widely collaborative effort by nearly all nations of the world, the Paris Agreement of 2015 was only a baseline commitment or rather a marker for the world to start controlling emissions. Moving from there, countries self-declared an accelerated set of targets in COP 26 held in Glasgow in 2021. But according to the Climate Action Tracker compiled by Germany based non-profits Climate Analytics and New Climate Institute, even these are not enough to limit global warming to 1.5 degree Celsius over pre-industrial levels. Tackling climate change requires a huge transformation across all sectors, including energy, infrastructure, agriculture, forestry, land use and waste management, driven through a wide range of policy interventions and financing measures by countries the world over. Given the exigency of the situation, it's the need of the hour that every country establishes mechanisms to actively control emissions and go beyond its committed green targets. Meanwhile, it is also crucial to proportionalise the historic contribution of the already industrialised developed countries to this climate catastrophe vis-a-vis the rest of the world and ensure settling of dues by making them "transfer funds'' and make "higher energy commitments''.

Facts: According to Government reports, in July 2021, non-fossil fuel sources accounted for 38.5 percent of generating capacity. India also reported that its emission intensity in 2016 was 24 percent below 2005 levels.

On August 3, 2022, India updated its climate pledge to the Paris Agreement confirming three of the five targets announced by Prime Minister Narendra Modi at COP 26 in Glasgow. These include a commitment to reduce emissions intensity of its GDP by 45 percent by 2030 from its 2005 levels and targeting to achieve 50 percent of its cumulative electric power installed capacity from non-fossil fuel energy resources by 2030. The same day, India also introduced an amendment bill to the Energy Conservation Act in the Lok Sabha. In line with the objective to meet the COP 26 commitments, the amendment bill provisions mandatory policy interventions such as prescribing a minimum consumption of non-fossil energy sources as energy or feedstock by "designated consumers" and extending the application of the energy conservation code and standards to offices, residential buildings, vehicles and vessels along with providing a framework for carbon market and carbon credit trading to incentivise voluntary increased investments in clean energy and energy efficiency by the private sector. By strengthening institutions like State Electricity Regulatory Commissions, Bureau of Energy Efficiency and State Governments, the bill also attempts to divest climate action implementation to more institutions.

While the amendment bill encapsulates a fair mix of mandatory and "stick & carrot" approaches to promote renewable energy and control greenhouse gas emissions, a primary question about the bill's effectiveness is about its implementation strategy. Experience with past environmental legislations like the National Action Plan on Climate Change adopted as early as in 2008 beckons that we take the written words with a pinch of salt. Providing broad objectives without addressing the strategy to achieve them has proven to be a recipe for failure. For achieving results like emission reductions, action plans ensuring close coordination between the different sectors responsible for emissions, an effective monitoring mechanism, inter-departmental coordination and mobilisation of funding and leadership are a critical necessity. Devising right granular action plans by States and departments is also contingent on accurate vulnerability and risk assessments and an absence of strict guidelines and standards to conduct vulnerability and risk assessments is a gaping gap in our ability to strategize and come up with an effective and unified climate action plan strategy.

Another question is the sufficiency of India's committed targets to limit global warming to 1.5 degree Celsius. According to the Climate Transparency Report, 2020- even if India achieves its announced 2030 targets, it still wouldn't be compatible with a global 1.5-degree Celsius scenario. An ideal climate action policy should also account for a roadmap to phase out coal and for an increase in India's forest cover but India's current climate change policy stays soft on the coal industry and is silent on expanding forest cover. India's emerging energy needs (a growing population of 1.38 billion) and a heavy reliance on coal (coal-based power generation during 2020-21 was 69%) make it infeasible for India to phase out coal in the timeframe of Western nations and according to projections, India may continue to subsidise and use coal well into 2040s till renewable energy generation has scaled enough to be able to substitute coal. Nonetheless, a government push to decarbonise coal by adopting mechanisms like carbon capture and storage and coal beneficiation has the potential to reduce CO2 emissions from coal power sector by up to 22 percent, according to experts.

Utilising the private sector by bringing businesses to integrate sustainability in their business models and decision making can go a long way in creating environment friendly outcomes and impacts across sectors. The "stick and carrot" approach to bring this includes providing incentives to the private sector such as benefits on reducing carbon emissions. Creating a holistic ecosystem to bring in better focus on ESG for consumers' reference is another way to move the private sector that holds immense potential impact. It drives from the fact that consumers are increasingly playing a key role in driving companies towards sustainable practice. According to an Economic Times report of October 2021, the ESG market cap was 105.22 lakh crore in October, 2021 with ESG compliant stocks returning 26% compared with 21% for Nifty 50 in the financial year until October. With investors taking the lead in evaluating companies on ESG parameters, companies all over the world have been forced to take ESG at the heart of their agenda. What is needed from the Government is benchmarking of the assessment and rating framework as multiple frameworks for measuring, reporting and methodologies for ESG ratings are currently floating around, making these unreliable. The SEBI's new BRSR (Business Responsibility and Sustainability Reporting) reporting system for top 1000 listed companies introduced in May, 2021 is a step in the direction. It would serve as a base document for stakeholders to compare large enterprises on sustainability metrics and enable them to make wise investment decisions. Regulations to extend these to smaller companies along with introducing more comprehensive set of standards is required.

Another lever is using the financial sector to push private companies to adopt sustainable actions. The financial sector, whose core function is to allocate resources and to channel finance, can play a major role in tackling climate change. In this regard, recently, a discussion paper has been released by the Reserve Bank of India or RBI on July 27, 2022 on Climate Risk and Sustainable Finance. In the discussion paper, RBI recognises the financial stability risks to financial institutions and banks that can occur from climate risks over multiple timescales. It points out that climate risks can impact the financial sector through two broad channels. One is the physical risks or the economic costs, financial losses due to climate related weather events (floods, heatwaves, landslides etc.) Second is the transition risks arising from the process of adjusting towards a low-carbon economy. These adjustments can be due to change in climate policies and regulations, emergence of new technologies, shifts in behaviours of customers etc. It provides broad guidance to regulated entities on internal controls and practices that they should adopt to identity, monitor and manage these climate related risks along with other financial risks. With the integration of climate risks with financial risks as proposed in the paper, private companies will have to stand fit on a range of climate risk indicators such as carbon emission footprints, concentration in CO2, share of GHG intensive assets for obtaining favourable financing terms from RBI regulated entities. In the discussion paper, RBI has also encouraged its regulated entities to set incremental targets for green finance over short, medium and longer term towards identified sectors.

To increase the pace of adoption of sustainable actions in the private economy, there is a need for the Government to adopt more "mandatory measures" than play "stick and carrot". Keeping "green financing" voluntary (as in the RBI discussion paper) and dependent on its voluntary uptake by the market could be insufficient in ensuring capital flow to green businesses. Similarly, subsidising renewable energy might not be enough for its private uptake without a parallel reduction in the coal subsidies provided. A unified climate strategy with efficient inter-departmental coordination and monitoring mechanisms can be a boon for the economy to make a green transition. India's current climate change targets (net zero emissions by 2070) are dependent on climate finance support by developed economies. Given the extreme climate conditions that India faces and the loss of life and economy attributed to it, India must take regulatory and legal measures to raise climate finance domestically from different sources and not just depend on international money. India should also strengthen its current targets and given its immense renewable energy generation potential, aim to lead by setting an example.