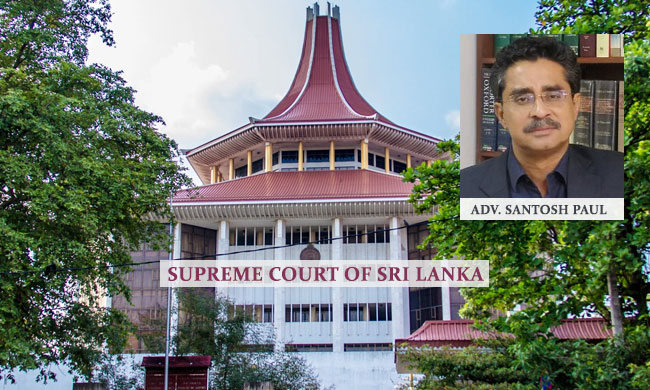 x
Where you see wrong or inequality or injustice, speak out, because this is your country. This is your democracy. Make it. Protect it. Pass it on. -Thurgood Marshall

President Maithripala Sirisena of Sri Lanka did what Presidents with an exaggerated sense of power, normally do. The President, in late last October dismissed the Prime Minister Ranil Wickremesinghe, the leader of the United National Party (UNP) which enjoyed the majority in the house. He appointed minority leader Mahinda Rajapaksa as Prime Minister. .Rajapaksa, without the numbers, on...

President Maithripala Sirisena of Sri Lanka did what Presidents with an exaggerated sense of power, normally do. The President, in late last October dismissed the Prime Minister Ranil Wickremesinghe, the leader of the United National Party (UNP) which enjoyed the majority in the house. He appointed minority leader Mahinda Rajapaksa as Prime Minister. .

Rajapaksa, without the numbers, on the strength of the Presidential order assumed office and even appointed a Cabinet. He did not face the Parliament. The anticipated defections did not take place and he could not cobble up a majority. Two weeks later the constitutional crisis now boiled over into a political turmoil. The President issued another proclamation. This time, he dissolved the Parliament at midnight and summoned a new Parliament to meet 2 months and 10 days later.

The President did this, despite the terse and precise text of Article 70 of the Constitution which prevents him from dissolving the Parliament unless 4 years and 6 months have passed after the first meeting of the Parliament. The second option which the framers very carefully crafted to protect democracy, enabled only the Parliament to seek dissolution of the House by a resolution of 2/3rd of its members voting in favour of the dissolution.

Invariably, with reticent courts, demagogic Presidents get away with constitutionally aberrant behavior. But this was Sri Lanka's painfully constructed IV Constitution after its independence since 4 February 1948. Sri Lanka has had more than its share of civil strife, sectarian conflicts and even a long running fratricidal separatist war which almost tore the country apart. And now the country was gearing up for another political upheaval. The Supreme Court of Sri Lanka found it incumbent "to hear the parties before the court without delay".

As it always happens in all constitutional matters, the right to seek a judicial review was questioned by the establishment with great vigour. The Framers of Sri Lanka's Constitution were careful enough to buttress judicial review. The proviso to Article 35 (1) guided that nothing should be "read and construed as restricting the right of any person to make an application under Article 126 against the attorney general, in respect of anything done or omitted to be done by the President in his official capacity". The Court eloquently put it that the sovereignty of the people was the 'grundnorm' of the Constitution, the Fundamental rights were "part of their intangible heritage" and the Court was "giving tangible and effective life and meaning to the sovereignty of the people".

Did the President enjoy an absolute immunity? Did the President enjoy an absolute immunity? Immunity shields only the doer not the act. This was the dicta of the Court in Karunathilaka VS. Dayananda Dissanayake (1991).In an incisive critique of the argument, the court concluded that the President was a creature of the Constitution and his powers are "circumscribed by the provisions of the Constitution". It reminded, that the nature of powers sought to be attributed to the President was that of an unrestricted "omnipotent power held by a monarch". The court reminded, "since 1972, this country has known no monarch and this court must reject any submission that carries with it a suggestion to the contrary".

The Court warded of attempts to thwart the judicial review of the President's action under the specious argument that it was a political decision and did not amount to "executive or administrative action". Sri Lanka has a body of constitutional cases which have given wide meaning and import to the expression 'executive and administrative action'. The court held that, to the exclusion of the power to declare war and peace by the President, "all his other powers are subject to review by way of an application under article 126". The President's power "is neither untrammeled nor unrestrained, and ought to be exercised within limits". Thus spake the Supreme Court of Sri Lanka setting aside the President's order dissolving the Parliament.

The curtains fell on a sordid display of constitutional perversity because of the fortitude of the Court. Will Sri Lanka's meticulously drafted IV Constitution, after decades of wading through its fratricidal conflicts, now survive the venality of its politics? It is difficult to predict. Whatever the future holds, 13th December 2018 will go down in the history of Sri Lanka as the day when its Supreme Court saved its constitution, tightened the constitutional grip over delinquent constitutional authorities and subjected them to the rule of law.

Santosh Paul is an Advocate at Supreme Court of India