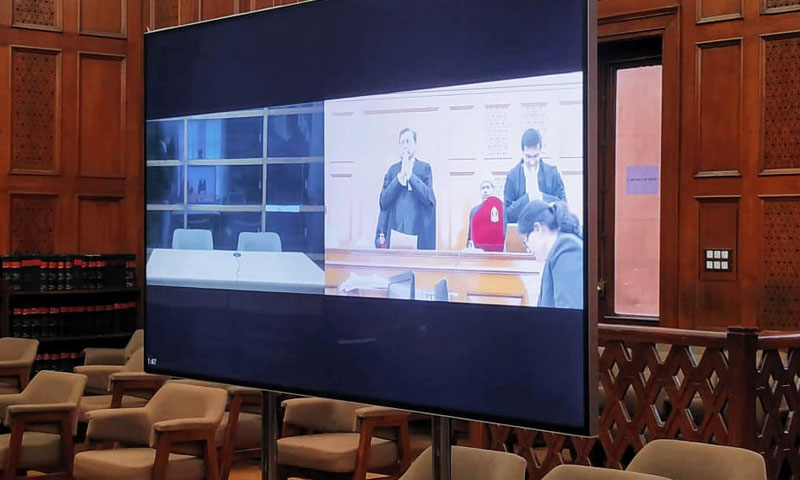 Covid-19 has been able to get cases across courts all over India adjourned for the next few weeks. Rightly so, the court crowd is an easy target for the monstrous corona virus. To contain its spread, courts all over the World are diverting courthouse traffic to virtual courts using remote video technology. In India, the Supreme Court is spearheading this change, with many High Courts...

Covid-19 has been able to get cases across courts all over India adjourned for the next few weeks. Rightly so, the court crowd is an easy target for the monstrous corona virus. To contain its spread, courts all over the World are diverting courthouse traffic to virtual courts using remote video technology.

In India, the Supreme Court is spearheading this change, with many High Courts following suit. It is arguable whether this technological breakthrough would have been introduced if not for Covid-19. The E-Committee at the Supreme Court of India has been spearheading digitisation of judiciary at all levels. It began with computerization of courts and by now it has made available data of more than seven crore pending and disposed cases electronically. E-filing of certain category of cases and digital libraries have been introduced. Not only that, the E-committee has been guiding and facilitating courts to create infrastructure for video conferencing / virtual courts to dispose routine remands and production of under-trial prisoners, record evidence and statements, dispose cases dealing with minor offences of traffic violations. The present move may be a result of drastic measures taken in drastic times, or it may have been in the pipeline with modalities worked out waiting for a formal implementation. Either way, setting-up of virtual courts can be a welcome catalyst which may not be rolled back even after the crisis is over. To list a few benefits, video conferencing of cases would mitigate the spread of the toxic Covid-19 in courts, reduce costs at various levels, ease the functionality of vacation bench as well as urgent matters on weekends and court holidays, and address infrastructural problems. Courts all over the World are turning to this disruptive technology to bring in a new order and contain the spurt of Covid-19 infection. Texas Courts have started hearing criminal cases through remote video technology so that the inmates do not leave jails.

Judges were in their chambers, and lawyers in their offices/residences. pic.twitter.com/UqF4nzFBod

The District Court in Mccracken County, Kentucky has also set up facility of video conferencing to conduct hearings. Courts in New York are also reported to turn to video conferencing to reduce court room crowding. United Kingdom is reported to have been considering to expand the scope of remote video technology in courts. The High Court of Sabah and Sarawak at Malaysia is taking steps for introduction of virtual courts in the wake of Covid-19. Bahrain is turning to digitisation of judiciary to contain the spread of this pandemic. Though not very robust, but Kenya has a system of virtual courts in place for delivery of justice since 2010. Suggestions are being put to the Supreme Court of Philippines, which is also shut, to launch virtual courts. Domestically, following in the footsteps of the Supreme Court, the Delhi High Court has arranged facility of video conferencing for hearing urgent matters. Bombay High Court, Patna High Court, Telangana High Court and Kerala High Court have also set up virtual courts to cut down court crowding. Karnataka High Court has made temporary arrangements of virtual courts at the principal bench at Bengaluru as well as benches at Dharwad and Kalaburagi. Gujarat High Court has also embraced social distancing by deciding to hear urgent matters by video conferencing. Efficiency of use of remote video technology in courts would require consistent multiple test runs inorder to prevent a possible pile up of applications seeking re-hearing due to technological glitches. The success of virtual courts would demand a surge in its infrastructure at Chinese speed inorder to prevent deprivation of justice. Inadequate infrastructure of remote video technology would lead to restrictions in the number of cases being heard.
The possible difficulties arising out of the use of this novel technology may be categorised as those resulting directly out of the app / software being used, and, teething problems associated with the change in general. Presently, the Supreme Court of India has prescribed the app 'Vidyo' to conduct video conferencing of cases. While I am not privy to the terms of engagement agreed between the Court and the app, however the general terms and conditions of the app may be given a close reading by dotting the i's and crossing the t's. As per it's terms and conditions – the app does not warrant or guarantee that "third parties will not intercept, interfere with, or access in an unauthorized manner, information or communication sent or received" as part of the services. The use of services of the app are at the user's own sole ri sk. Coupled with the term that the app has discretion to, inter alia, store, modify and transmit the content, a security breach at the app may put the data of video conferences already conducted at peril and the app may not even be liable. The information collected by the app "is kept on servers that are owned or operated either by Vidyo or by Vidyo contracted suppliers. These servers are predominantly located in the United States, Europe and Asia." Thus, the data may be located far beyond the territorial limits of India. Infact, the terms may be changed at any time unilaterally which would be binding on the users.
The early problems with video technology may be that there would be an impact on the speed in dispensation of justice. The speed at which cases are heard in courtrooms would be a challenge for hearings through video conference. Inability to connect, frequent video drop, and a slew of other unforeseen / unavoidable issues may lead to difficulty in connecting judges and counsels concerned in a particular case. It may sound as putting the cart before the horse but what if the counsel or a party required to appear is unable to join the conference on time? Can passovers and adjournments apply to virtual court hearings? Surely, a constantly evolving software / application be needed for continuously progressing to a comprehensive and more matured facility. While arguments by counsels can be shifted to virtual world, however, the stage of cross-examination of witnesses and accused would require a lot of thought and planning as reliance is placed on non-verbal cues, such as demeanour, background assistance in answering questions, and body language. The fundamental purpose of courts is to resolve disputes. An appetite for constant changes to the video technology may be needed so that this elemental purpose is not defeated. Developing a new dedicated application / software for video conferencing by the Supreme Court of India may be considered with data localisation at server rooms situated under high security. A parallel active telephone line may be kept live to deal with situations where the video conferencing abruptly goes off. Unlike the contemporary CoVid tests, there is an earnest hope that the outcome of pilot testing of remote video technology in courts turn out to be positive. As Winston Churchill rightly said, "There is nothing wrong in change, if it is in the right direction. To improve is to change, so to be perfect is to have changed often."
The author is practicing law before the court in Delhi. He can be reached at [email protected] Views are personal
TagsCourt Hearing Covid19 digitalization Supreme Court E Court Video Conferencing
Next Story
Similar Posts
+ View more
Law Firms
+ More