E-Litigation - A Re-Look At The Supreme Courts Rules, 2013 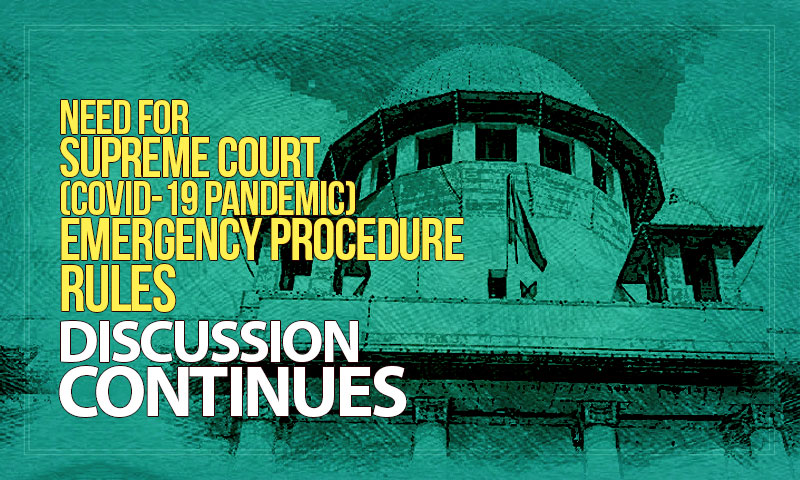 Introduction of a concrete mechanism to ensure safe yet active functioning of the Supreme Court during unprecedented situations, such as the present pandemic, is the need of the hour. An alternative to the SupremeCourt (COVID-19 Pandemic) Emergency Procedure Rules, 2020 as suggestedby Mr. Shyam Divan, Senior Advocate, is the amendment of the existing Supreme Court Rules, 2013. A...

Introduction of a concrete mechanism to ensure safe yet active functioning of the Supreme Court during unprecedented situations, such as the present pandemic, is the need of the hour. An alternative to the SupremeCourt (COVID-19 Pandemic) Emergency Procedure Rules, 2020 as suggestedby Mr. Shyam Divan, Senior Advocate, is the amendment of the existing Supreme Court Rules, 2013. A long-term plan to ensure e-filing and virtual disposal of matters before the Supreme Court is modifications to the existing Rules.

Upon declaration of a nation-wide lockdown in India, the Supreme Court initiated e-filing and hearing through virtual courts. The Court, on its administrative side, issued directions to enable advocates-on-record and petitioners-in-person to approach the Apex Court, by filing petitions or appeals online, through the platform developed by it. The Supreme Court conducted a webinar on 15th May 2020 in the presence of the Hon'ble Chief Justice of India and Hon'ble Dr. Justice D.Y.Chandrachud highlighting the features of the e-filing platform. The changes in the system are a step in the future, and ought to be given statutory recognition through amendments in the 2013 Rules.

Filings and Service of Pleadings and Documents

Order VIII Rule 6 of the 2013 Rules provides that all plaints, petitions, appeals, or other documents shall be presented at the filing counter of the Supreme Court. This Rule can be amended to bring e-filing within its ambit, and restrict physical filing to extraordinary circumstances only.

The practice of filing a number of copies for the use of the Court as provided under Order XV Rule 1, and filing of 7 copies of the criminal appeal memo under Order XX Rule 3, must be modified to accommodate supplying the said copies in a PDF format electronically.[2] This would have the added advantage of reducing the inconvenience of voluminous files, occupying precious real estate in record rooms of the Supreme Court complex. It would also enable judges to locate a particular pleading or annexure in the petition on the click of a button.

Order XV Rule 2 which provides for filing and service of caveats must be modified to include e-filing, and service through registered e-mails of advocates-on-record and petitioners-in-person.

After a petition / appeal is filed at the registry of the Supreme Court, the registry intimates the advocate-on-record of the defects[3] in the filing. Under Order VIII Rule 6, sub-rule (3), where a document is found to be defective, the said document shall be placed before the Registrar, who may allow a party to rectify formal defects in his presence. To accelerate the process, the communication and rectification of such defects can be made through registered e-mails of the advocate-on-record, or through the e-filing platform.

In addition to petitions / appeals, filing of affidavits as required under Order IX Rule 3 must be amended to accommodate e-filing. Order IX Rule 12 provides that where the Court has limited the time for filing affidavits, no affidavit filed after such time shall be used except by leave of the Court. This rule can be brought in conformity with e-filing by creation of a time-restricted URL, which would expire on completion of the time prescribed by the Court.

Where notice has been issued, and the respondent has entered appearance personally, or through an advocate-on-record, all communications to such party must be made through the registered e-mail ID of the party, or the advocate-on-record. This would imply that service of interim applications, miscellaneous applications, additional documents, etc. on such parties shall be through the registered e-mail ID.

After necessary documents are filed and all defects cured, a petition is set down for hearing under Order XV Rule 6. The concept of "hearing" as envisaged under the 2013 Rules refers only to physical hearings conducted at the premises of the Supreme Court. The 2013 Rules must be amended to provide for a definition of "hearing", which would include the conduct of proceedings through a video-conferencing platform. Article 145(4) of the Constitution of India mandates that all hearings of the Supreme Court must be made public. Provision must be made for a secure electronic gateway to ensure protection of privacy of judges, advocates and parties; at the same time, balance must be struck to warrant transparency and public availability of the proceedings. One mode of ensuring a safe yet open portal is to provide pre-registration links to interested members of the public, such links being valid for only one working day, or for one particular hearing.

The benefits of video-conferencing are multi-faceted. It cuts down on travel cost, and saves time of judges, advocates and parties. Convening of courts through online platforms is not a one-size-fits-all solution, and some matters may necessitate hearings in court. Steps must be taken to identify a category of matters, which may be disposed of through online hearings. Such matters may include transfer petitions, applications for appointment of an arbitrator, matters listed for ensuring compliance of orders, applications for directions, etc. In addition to court proceedings, matters listed before the Chamber Judge and/or Registrar for completion of service and pleadings can be heard through video-conferencing.

Online filing should not only be restricted to filing of judicial documents, but must extend to applications on the administrative side. For instance, under Order XIII Rule 3, an advocate-on-record, or a party-in-person may apply for a certified copy. The Rule must be amended to include filing of such an application through the registered e-mail address of the advocate-on-record or the party-in-person.

Where a petitioner seeks leave to withdraw a petition, the written notice filed before the Registrar under Order XV Rule 9 must be communicated through the registered e-mail of the advocate-on-record. The Rule must be amended accordingly to accommodate e-filing of the notice of withdrawal.

Circulation of letters seeking adjournment of matters must be intimated to the Registrar through registered e-mails of the advocates-on-record. Objections to adjournments may be recorded as a response, with copies marked to all other parties.

Mentioning memos for permission to file documents, or compilations must be intimated to a Mentioning Officer specially designated for such purpose, through e-mail. Such permission may be granted by sending a time-restricted link to the advocate-on-record, to enable uploading of such documents, or compilations. For instance, if upon considering the contents of the e-mail, the Mentioning Officer is of the view that a party ought to be granted 1 weeks' time to file a compilation of judgments, the concerned Registrar may respond to the advocate-on-record by communicating a URL, which would expire at the end of one week. To expedite the process of mentioning through e-mails, and to avoid lengthy requests, a prescribed Form for mentioning memos must be provided to advocates-on-record. Such Form must be filled with requisite details, and must be communicated through e-mail.

This article urges that the changes introduced by the Supreme Court with regards to filing and hearing of cases should not remain restricted only to the lockdown period. Adoption of electronic litigation would be beneficial to judges, lawyers, litigants, court staff and general public, even in the post-lockdown period. These adaptations must be given statutory recognition by way of appropriate amendments to the 2013 Rules.

A complete shift to virtual courts may not be feasible, or desirable, but a transition to e-filings and virtual hearings may ease out the mounting pressure on the judiciary. Even though virtual hearings may appear to be the younger cousin of court hearings, absolute abrogation of physical hearings would not serve the interest of justice. After all, Court hearings are nurseries, where generations of young lawyers cut their teeth, and receive their "on-job" training. Considering the situation as it stands today, a shift in the manner of filing and hearing of matters before the Supreme Court is inevitable, and to keep up with the transition, amendments to the 2013 Rules are a pressing priority.
Views are personal only
(Author is Law Clerk-cum-Research Assistant at the Supreme Court of India)

[2] This modification can be extended to Order XXI Rule 6, which provides that at the time of filing of a Civil Special Leave Petition, three spare sets of the SLP and accompanying papers must be filed.

[3] Defects are digressions from the standard format as prescribed under the Supreme Court Rules, 2013. For example, incorrect pagination of the file, non-filing of translated copies of documents / petition, deficit of court fees, etc.