Equality Is Not Enough, Ensuring Equity In Acid Attack Legislation In India 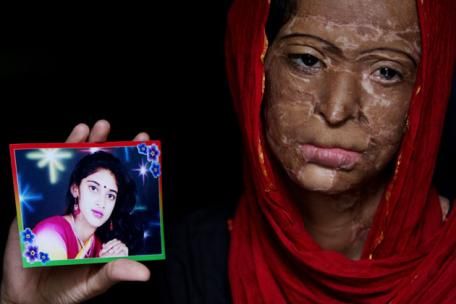 Recently, the movie 'Chhapaak', based on the story of the acid-attack survivor Lakshmi, was released. An alarming spate of memes and reactions followed. One of the memes carried the poster of the movie, featuring Deepika Padukone as Lakshmi, with the caption – 'this could be you par tumaangyi' which translates to 'this could be you but you gave in (to my advances)'.[1]More than...

Recently, the movie 'Chhapaak', based on the story of the acid-attack survivor Lakshmi, was released. An alarming spate of memes and reactions followed. One of the memes carried the poster of the movie, featuring Deepika Padukone as Lakshmi, with the caption – 'this could be you par tumaangyi' which translates to 'this could be you but you gave in (to my advances)'.[1]More than an irresponsible behavior of certain anti-social elements, this seems to be a reflection of a wider, deeply ingrained sexist behavior that normalizes acid-attacks on women who decline a man's advances. This has re-kindled debates over the gendered nature of acid-attack offences.

The acid-attack laws in India have seen an interesting evolution. But in the course of this evolution, the distinct nature of acid-attacks in India as a form of gender violence has not been given due consideration. This lacuna in the law has garnered a lot of attention lately and has led to the introduction of a couple of bills in the parliament too. However, no corrective legislation has been adopted so far.

LEGISLATIVE EVOLUTION OF THE OFFENCE OF ACID-ATTACK

The Law Commission of India in its 226thReportdealt with this offence and noted that although the offence can be perpetrated against both men and women, a specific gender dimension has been observed in India.[2]

There was no specific legislation dealing with acid-attacks before the Criminal Law Amendment Act (2013) was passed. The offence was registered as grievous hurt under Sections 320, 322, 325 and 326 of the Indian Penal Code (IPC). Section 326 deals with grievous hurt caused by a dangerous weapon or other means including any "corrosive substance".[3]However, the grievous-hurt provisions fell short of doing justice to the multiple and peculiar forms of injuries inflicted on different parts of a female body in an acid-attack. Further, these sections didn't provide for an optimum compensation to the victim. There have been cases where no compensation[4] or compensation as low as Rs 1000[5]or Rs 5000[6] was provided in spite of the severe consequences.

The J.S. Verma Committee identified these lacunae and recommended that 'acid-attacks be made a specifically defined offence under IPC, and that the victim be compensated by the accused'.[7]Consequently, the 2013 amendment was passed adding two new sections, 326A and 326B, to the IPC.[8]Section 326A criminalizes voluntarily causing grievous hurt through the use of acid with a minimum imprisonment of not less than ten years[9] and Section 326B makes voluntarily throwing and attempting to throw acid on any person, a punishable offence, with minimum five years imprisonment.[10] Both the sections provide for compensation essential to meet the medical expenses of the victim. It is to be noted that both of these sections are gender-neutral.

Justice N.V. Ramana, in Suresh Chandra v. The State of West Bengal,[11] opined that in spite of bringing in this amendment, the number of acid-attack cases have been on the rise. He further observed that stringent laws and strong enforcement agencies would never be sufficient till the deep-rooted gender bias is not removed from the society.

Acid-attack still continues to be one of the most heinous attacks on women. Though the J.S. Verma committee recognized that the offence has a gender specific and discriminatory nature towards women, none of the laws till date acknowledge the gendered aspect of this crime.

The Convention on the Elimination of Discrimination against Women (CEDAW) was adopted by the UN General Assembly in 1979 and ratified by India in 1993.[12]Under Article 1 of the CEDAW, 'discrimination against women' has been interpreted to include gender-based violence, which in turn is defined as "violence which is directed against a woman because she is a woman or which affects women disproportionately".[13]

Atleast four different reliable data-sets recorded in separate researches can be perused to draw the above conclusion – annual statistics of the National Crime Record Bureau (NCRB); a study on acid violence in Bangladesh, India and Cambodia by the Avon Global Centre for Women and Justice[14], Cornell Law School (AGC) which records all the acid-attacks published in Indian newspapers from 2002 to 2010; a study on acid-attacks on women in India published in the Indian Journal of Burns (IJB)[15] which analyzes the medical records of acid-attack victims in certain hospitals from 2012 to 2017; and a study published in the Journal of Emerging Technologies and Innovative Research (JETIR) which records data on acid-attacks from 2010 to 2016.[16]

Further, a closer look at the causes of these attacks shows that these cases of acid-attacks can actually be seen as 'violence directed against a woman because she is a woman'.

The largest chunk of acid-attacks has been perpetrated by spurned men and directed at women for rejecting love, marriage or sex proposals.[18]AGC found that such rejections motivated 35% of the attacks. IJB reported that 42.3% of the cases were perpetrated by 'one-sided lovers'. JETIR reported that 49 of the 307 cases fell under this category. A study conducted by UNICEF also reported that most of the victims of acid-attacks across the world are young girls who have rejected sexual advances or marriage proposals.[19]

All of these categories of crimes are distinct symptoms of violent patriarchy. That acid-attacks are extensively being used against these backgrounds is indicative of the fact that they have become yet another weapon in the huge arsenal of gender-violence.

Moreover, in categories like land disputes and family disputes, where prima facie acid-attacks might not look gendered, they turn out to be so upon further inspection. It was observed that when acid-attacks are committed in land and family feuds, they are mostly directed at young women of the family.[22] This is apparently because the perpetrators anticipate maximum potential damage to the family by disfiguring its young women. It is supposed to render them 'unmarriageable' and bring 'dishonor' as well as additional social and financial encumbrance upon the family.[23]

The Law Commission has also noted that most of the reported cases have been against women, particularly young women, for rejecting marriage proposals, spurning suitors, denying dowry, preventing sexual advances, etc.[24]

Both CSAAAW and the Law Commissionhave recognized that acid-attacks are systemically used as "a weapon to silence and control women by destroying what has been constructed as the primary constituent of their identity – their bodies".[25]That the offenders intend to attack the 'beauty' and 'sexuality' of womenis also evident from a study of the body parts primarily targeted – face, neck, upper body, breasts, buttocks, vagina etc.[26]IJBreported that facial disfiguration occurred in 100% of the cases while genitals were affected in 5.8% of the cases.[27]

Thus, it is amply clear that acid-attacks are a form of gender violence. To not recognize this fact in legislation and place sole reliance on gender neutral provisions is to vouch for equality but not equity.

TOWARDS A GENDER-SENSITIVE LEGISLATION

The UN Model Framework for Legislation on Violence against Women suggests that legislations dealing with such issues should be 'gender-sensitive' and not 'gender-blind'.[28] It calls for a need to recognize that experiences of violence differ for men and women due to historically skewed power relations.[29]

Certain initiatives have been taken in this direction recently. The National Commission for Women in its annual report of 2008-09 published a model legislation for acid-attacks that identifies 'victims' as 'women and children'.[30] The draft suggests a pro-active approach that focuses on monitoring and expediting the investigation, supporting the victims throughout their legal battles and rehabilitating them.[31]

In 2017, a bill in this regard was tabled in the Rajya Sabha[32]. In 2018, a similar bill was tabled in the Lok Sabha[33]. Both of these bills addressed female victims exclusively[34] and seemed to be based on a threefold approach.Firstly, they proposed rules for more stringent regulation of acid sales.[35] Secondly, recognizing the gravity of the offence, they proposed to increase the punishment for acid-attacks under IPC.[36] Thirdly, they proposed to constitute boards[37] at various levels to make suggestions, monitor the cases, assist the victims and ensure rehabilitation.[38]

Neither of these bills waspassed. Nonetheless, they can be regarded as welcome initiatives towards making the law more equitable. This is because the primary difference between the consequences faced by male and female victims is that the female victims face complete social and economic ostracisation. Because of the excessive emphasis placed on the 'beauty' and 'appearance' of women, they face graver psychological and social repercussions of disfigurement. This skewed scenario can be aided by helping these women recover from the psychological and economic shock and re-amalgamating them with the society. This is exactly what these bills endeavored to achieve.

The way forward lies in giving due recognition to the gendered nature of acid-attacks and conducting more research and data-collection in this direction. Further, special legislations like the bills discussed above should be adopted to recompense for the inherently disadvantaged position of women at the receiving end of acid-attacks.

[2]Law Commission of India, The Inclusion of Acid Attacks as Specific Offences in the Indian Penal Code and a law for Compensation for Victims of Crime, Report No. 226, (July 2009) available at http://lawcommissionofindia.nic.in/reports/report226.pdf (Last accessed on May 20, 2020).

[24]Law Commission of India, The Inclusion of Acid Attacks as Specific Offences in the Indian Penal Code and a law for Compensation for Victims of Crime, Report No. 226, 22 (July 2008) available at http://lawcommissionofindia.nic.in/reports/report226.pdf (Last accessed on May 20, 2020).