When A Prime Minister Was Put On Trial : Excerpt From Prashant Bhushan's Book 'The Case That Shook India' 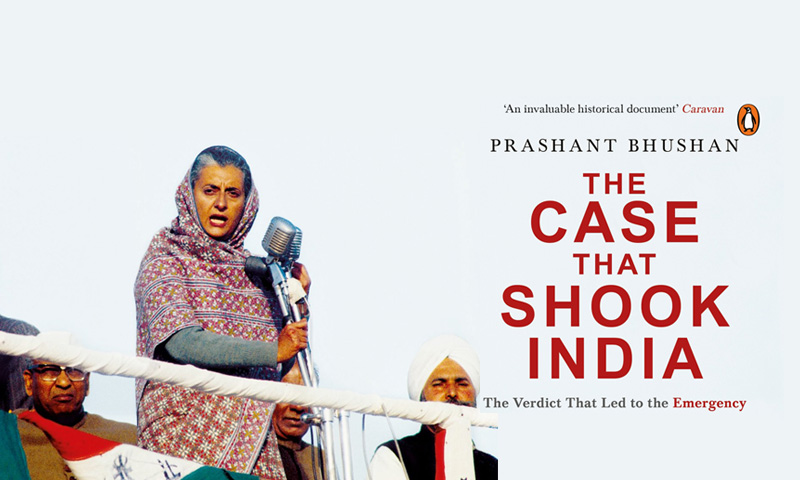 The judge arrived two minutes before 10 a.m. Everybody in the courtroom rose when the judge came in. After taking his seat, he announced that the court conventions dictate that no one should rise when a witness comes in. This however did not prevent some people from rising when Mrs Gandhi came in. Mrs Gandhi took a seat which was specially provided for her. The normal practice is that...

The judge arrived two minutes before 10 a.m. Everybody in the courtroom rose when the judge came in. After taking his seat, he announced that the court conventions dictate that no one should rise when a witness comes in. This however did not prevent some people from rising when Mrs Gandhi came in.

Mrs Gandhi took a seat which was specially provided for her. The normal practice is that a witness stands in the witness box. The deviation from convention was made by Justice Sinha after consultation with Bhushan. Her chair was on a raised platform to the right of the judge so that she was on level with the judge. She looked composed and unruffled as she sat down. If she regarded the ordeal before her as something of great significance, she did not give the slightest indication of it. Her appearance was of one who was performing yet another routine task.

Khare was called upon to lead the examination, and he was visibly excited. He was the first person to question the Prime Minister in court. The main issues which could turn on Mrs Gandhi's evidence were (1) whether she held herself out as a candidate prior to 1 February, and (2) whether Yashpal Kapoor actually resigned on 13 January. Khare's questions were mainly focused on these issues. (3) His examination lasted about an hour.

It was now Bhushan's turn. He was inwardly excited, though outwardly calm, when he got up to begin the task before him. It was a big event for him. Apart from the fact that he would be cross-questioning the Prime Minister, with the whole country watching at least through newspapers, he was also fully aware of the far-reaching political consequences of the outcome of this case. This cross-examination could be crucial to the outcome of the case.

Most people who are not familiar with courts visualize a cross-examination as something dramatic where the counsel is supposed to give a theatrical display, Perry Mason style. Most cross-examinations are, however, incredibly dull where little happens in the nature of drama. The cross-examination had not finished when the court rose that day. That evening, all the Opposition leaders who had come from Delhi to witness the cross-examination were invited for tea to Bhushan's house. Opinion there was almost unanimous, that Mrs Gandhi had fared well on the first day of her cross-examination. She had maintained her composure and was convincing in the manner in which she had answered the questions. Piloo Mody did not enjoy the cross-examination. 'Why don't you heckle her? Annoy her a bit!' he told Bhushan. Bhushan smilingly remarked that on the first day, he had only given her the bait and made her feel confident. 'Tomorrow she will walk into the trap,' he said. Little did anyone know that he was indeed serious and was about to spring a surprise.

Pandit Kanhaya Lal Mishra wrote to Mrs Gandhi at the end of the first day's cross-examination, 'I hear that today's cross-examination has gone off very well. I am pleased about that. But that still does not alter my opinion that you should not have appeared for the crossexamination.' His words were indeed prophetic, and later Mrs Gandhi was to regret not having followed his advice.

Bhushan took only ninety minutes to complete his cross-examination the next day. The tables had indeed turned. The additional written statement containing the decision of the All India Congress Committee about her constituency had caught her off guard. Till the previous day she had been maintaining that she had taken a final decision to contest from Rae Bareli only on 1 February. Her additional written statement said that a final decision regarding her constituency was announced by the AICC on 29 January. When confronted with this statement, she said that the statement was drafted in legal language which she had difficulty in understanding. Bhushan did not give her time to recover her composure. Although he had some more questions, he decided to end at this point, not taking the chance of losing his advantage.

The people at large, who were following the cross-examination, did not, however, catch on to Mrs Gandhi's blunder till the arguments stage, when it was fully exploited by Bhushan. But the more astute observers caught on. The report of the second day's cross-examination was headlined in some of the newspapers as: 'Prime Minister did not know of AICC decision about her constituency' and 'PM cannot follow legal language.'

Mrs Gandhi was the last witness of either side to give evidence. The stage was now set for the main battle, the final arguments. The arguments were to start on 21 April. Both sides started preparing for them. Meanwhile, some of the documents, mainly the controversial Blue Book, were examined by Justice Sinha on 2 April. These were the documents on which privilege had been claimed. The Supreme Court, it will be remembered, had ruled that the judge could examine them and then either uphold or reject the privilege as he thought fit. The judge accepted the claim of privilege in respect of some documents and rejected the claim in respect of others, which were then exhibited and admitted as evidence.

One further development took place before the arguments started. On 16 April, a writ petition was filed in the court by Raj Narain's lawyers, challenging the constitutional validity of the R.P. (Amendment) Act. It was challenged mainly on the ground that it was discriminatory and thus violative of Article 14 in its retrospective effect.

The stage was now set for the arguments. Raj Narain was in jail at this time because of his participation in a civil disobedience movement. This was not a novelty for him as it was his fifty-second trip to jail since Independence. He had spent more than half the post-Independence period in jails. He, however, was brought every day to Bhushan's house in police custody, to allow him to brief his counsel on the case. Being of a religious bent of mind, he gave Bhushan a queer stone to keep in his pocket during the arguments as a good luck charm. Although Bhushan is not superstitious, the stone remained in his pocket during the entire arguments.

On 12 June 1975, for the first time in independent India's history, the election of a Prime Minister was set aside by a High Court judgment. The watershed case, Indira Gandhi v. Raj Narain, acted as the catalyst for the imposition of the Emergency. Based on detailed notes of the court proceedings, The Case That Shook India is both a legal and a historical document of a case that decisively shaped India's political destiny.

The author, advocate Prashant Bhushan, sets out to reveal the goings-on inside the court as well as the manoeuvrings outside it, including threats, bribes and deceit. Providing a blow-by-blow account, he vividly recreates courtroom scenes. As the case goes to the Supreme Court, we see how a ruling government can misuse legislative power to save the PM's election.

Through his forceful and gripping narrative, Bhushan offers the reader a front-row seat to watch one of India's most important legal dramas unfold.

Prashant Bhushan is an eminent public interest lawyer in the Supreme Court of India, most known for cases such as 2G and Coal Scam. He is also an activist and a founder member of Swaraj Abhiyan-a campaign organization that focuses on various issues such as the environment, human rights, corruption and good governance. He was a prominent member of the group India Against Corruption (IAC) and worked alongside Anna Hazare for the implementation of the Jan Lokpal Bill (Citizen's Anti-corruption Ombudsman Bill).