Exploring Corollaries Of The "Me Too" Movement In India 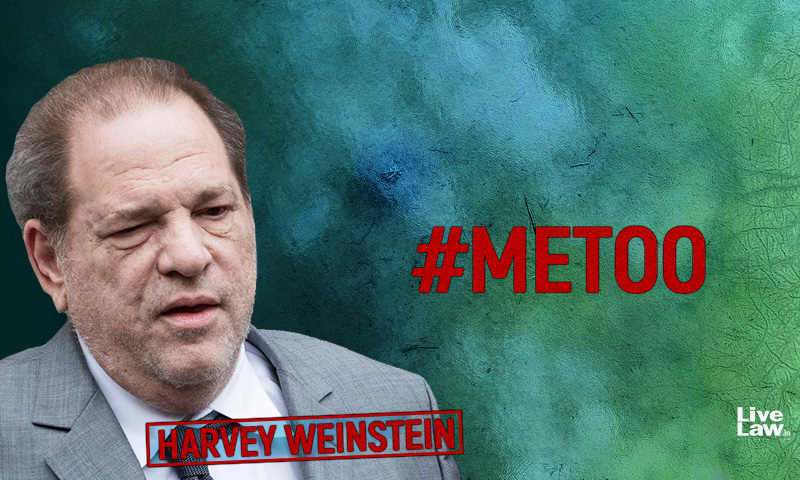 Following allegations of sexual misconduct against film producer Harvey Weinstein surfacing in October 2017, the Time Magazine declared "The Silence Breakers" as the "2017 Person of the Year". This article had featured stories from women and men who had suffered from sexual harassment and/or sexual assault.

The profound reality that emerged from this chain of events was sparked by "Me Too" declarations across the globe, was that that sexual harassment and/or sexual assault surpassed genders, sectors, communities, countries etc.

When actress Alyssa Milano on October 15, 2017 posted on her twitter account,"Me Too. Suggested by a friend: "If all the women who have been sexually harassed or assaulted wrote 'Me too.' as a status, we might give people a sense of the magnitude of the problem." If you've been sexually harassed or assaulted write 'me too' as a reply to this tweet" she received 32,000 replies within 24 hours. CNN reported that 4.7 million people engaged in the "me too" conversation on Twitter, with over 12 million posts, comments, and reactions in the first 24 hours after Milano's post. Millions of "Met too" statements across the world emerged and the #Metoo movement surfaced as a campaign to raise awareness about sexual harassment and sexual violence.

Outcome of the Me Too Movement In the Indian Context

In 2018, the movement caught up speed in India with Actress Tanushree Dutta accusing Nana Patekar of sexual harassment while shooting for the 2008 film 'Horn Ok Please'. Following this, a series of posts by other women in India emerged and professionals called out behaviors with sexual connotations at workplaces, schools, colleges etc. A more sinister trend, which emerged, was that sexual harassment & sexual misconduct transcended all boundaries and spaces.

Even though the Sexual Harassment of Women (Prevention, Prohibition, Redressal) at Workplace Act, 2013 (the Act) had been in effect for over 5 years since the "Me Too" campaign erupted on social media, the impetus that it provided to the issue surrounding sexual harassment and misconduct at workplace was manifold. The campaign not only highlighted the magnitude of the problem but also made visible, the problem of "testimonial injustice". An injustice of this kind occurs when someone is ignored or not believed because they are a woman, or broadly, because of their identity. The conundrums surrounding backlash and stigma of reporting crimes of sexual violence came to the fore and it quickly became evident why victims and survivors are unable to speak up.

When discourse begins, the legal frameworks in place definitely get jostled up and make way for normative justice by sensitization & awareness. This happened with the advent of "Me Too" movement as well. While sensitization and awareness did pick up pace, however associating it with triviality & gender specificity dampened the movement.

The Harvey Weinstein Verdict & its Juxtaposition In the Indian Context

Rape By "Acquaintance" & "Person In Authority"

Following the culmination of a case that erupted the #MeToo Movement, Harvey Weinstein was sentenced 23 years in prison on March 11 2020 by a New York Court on counts of a "criminal sex act in the first degree" on Miriam Haley in the first degree and the third-degree rape of Jessica Mann[1]. After a trial, which lasted 6 years, he was convicted of rape and criminal sexual assault. Six women testified against him. He was acquitted of the serious charges, i.e. predatory sexual assault.

Miriam Haley was a crewmember of Weinstein's production team. She had stated in her statement to the Judge that as a young woman who was struggling in her career, Weinstein came as a knight in shining armour and offered her a job in trying times. However, things quickly turned horrific after he forcefully raped Haley in his apartment.

This brings to light another important aspect of sexual crimes, i.e., rape by an "acquaintance" and by a person in authority. For Haley, Harvey Weinstein was a known perpetrator as well as person in authority. There existed a fiduciary relationship between the two. Abuse of his position devolved, the moment Miriam believed that if she did not succumb to Weinstein's demands, she would be sacked from her job.

Acquaintance rape or rape by a person known to the victim or rape by family members of the victim is not uncommon in India. In fact, the National Crime Records Bureau (NCRB) figures for 2018, show that across the country, 94% of all rapes were committed by acquaintances.

Further, the Indian legal framework specifies stringent penalties for anyone found guilty of using his position to assault her sexually.

Section 376C of the IPC criminalises sexual intercourse by a person in authority. It states that,

"Anybody in a position of authority or fiduciary relationship, who abuses such position or fiduciary relationship to induce or seduce any woman either in his custody or under his charge or present in the premises to have sexual intercourse with him, such sexual intercourse not amounting to the offence of rape, shall be punished with rigorous imprisonment of either description for a term which shall not be less than five years, but which may extend to ten years, and shall also be liable to fine".

'Person in authority' also includes a public servant, a superintendent of a jail, remand home or any other place of custody, and the management or staff of a hospital.

This means that even if there is consent and there exists a fiduciary relationship between two people where there is abuse of position by a person in authority and sexual intercourse occurs, it shall still attract a sentence for a term which shall not be less that five years but may extend to ten years.

The Debate on Consent

The basis of the aforementioned provision lays in the reasonability of whether there can even be consent between two people who share a fiduciary relationship and when one is the subordinate of another.

While rape in terms of Section 375 includes the absence of consent to be the foundation for establishing an offence of Rape vis-à-vis the IPC, the offence under section 376C reiterates that sexual intercourse between two people will also be criminalized & penalized, if there is a power imbalance and there exists a fiduciary relationship between them.

Imbalances of power are created when one person has the power to influence things like money, a place to live, a job, or a reputation, among other things. The repercussions of a power imbalance in a relationship leads to various nuances such as how comfortable a person may feel saying no to any sexual advance or how someone may fear negative consequences for not consenting. Typically, consent is never possible when someone feels they don't have a choice.

With the advent of the Criminal Law (Amendment) Act, 2013 and the introduction Section 376C, the basis of consent obtained for sexual intercourse would lie to have been obtained under compelling circumstances.

Similarly, consent obtained for sexual favours or advances in a workplace by a person in authority, say by one who is typically at a higher position than the person at the receiving end, will also stand the test of legal principles in light of Sexual harassment of women (Prevention, Prohibition & Redressal) Act, 2013 (POSH Act) at workplace.

The POSH Act defines sexual harassment of this kind as "quid pro quo" or "this for that". Recently, the Allahabad High Court in Gyanesh Shukla Vs. Chancellor, University of Lucknow[3], the definition of quid pro quo was reiterated,

The key elements of quid pro quo sexual harassment are a demand for a sexual favour and the threat of adverse job consequences if the demand is refused. It is implicit in the second element that the perpetrator has to be in a position to create adverse job consequences for the woman. It should be stressed here that it is not necessary in an allegation of quid pro quo harassment for the threat of adverse employment action to have been carried out[4]. It is sufficient for the complainant to prove that such a threat was made.

Criminalisation of sexual contact in relationships between a person of authority and a person under his authority is a contemporary trend across legal systems[5].

In India, this trend is recent as well. Before Criminal Law (amendment) Act 2012 was introduced, the aspect of criminalizing "consensual sexual intercourse" under specific circumstances did not find its way into the bylanes of criminal jurisprudence.

Moreover, Sexual Harassment was only recognized as a criminal offence under section 354 IPC and "outraging the modesty of women" was elucidated.

The Criminal Law Amendment Act 2013 added section 354A to expand the definition of sexual harassment.

Subsequently, a separate law, i.e. the POSH Act was also enacted in 2013 and specifically defined Sexual Harassment at Workplace.

What the Weinstein verdict means for India

Though it is difficult to ascertain the impact of the Weinstein verdict on the movement in India, as India & USA have very different legal systems, the fact that someone at a powerful position was held accountable for his actions sends out a powerful, reassuring message. The entire basis of the Me Too campaign has been to speak out, and when someone in power is called out and what follows from such a calling out is punishment, it definitely adds more fire to the movement across the globe.

It is also pertinent to mention that a number of people who were named in India have gone after the victims and filed defamation suits. The most recent one being of Artist Subodh Gupta who "amicably" settled the case with the instagram account holder "Herdsceneand" for calling him out. Beside, in the legal context, the limitation period of 3 months (which is extendable by 3 more months) under the POSH Act as well as the bar under section 468[6] of the Criminal Procedure Code from taking cognizance of an offence under section 509[7] IPC beyond one year has leads to minimal chances of conviction of accused persons.

However, it is extremely important to keep in mind that since the tangibility of such impact cannot be measured, using the example of Weinstein during sensitizations & awareness programs is surely a resounding foundation to begin with. After all, the Me Too campaign has always been about being heard and to be vindicated.

While it is important to remember that sexual harassment, sexual misconduct and sexual assault have wide amplitude of nuances, in no way do these contemporary trends of criminalization of consensual sexual relations between two persons, with one being in authority establishes the development of, or insinuation of new and unexplored legal autonomy. On the other hand, these offenses apply to the coexistence of personal and professional relationships and the overstepping of power to engulf sexual connotations. Though ambiguous and subjective, the challenge remains to prevent overstepping of boundaries, restraining power and keeping it within limits.

Views of the author are personal and have no allegiance to any entity or organization.

[4] Final Amici Curaie brief by "Lawyers Collective" made to the Supreme Court of India on 18.11.2013, In the matter of: Allegation of Sexual Harassment at Workplace made by an intern against a former Judge of this Hon'ble Court

[5] "What is Wrong with Sex in Authority Relations? A Study in Law and Social Theory?", Galia Scheebaum, Journal of Criminal Law & Criminology, Vol 105, Issue 2

[6] Section 468. Bar to taking cognizance after lapse of the period of limitation, Code of Criminal Procedure 1973

[7] Section 509. Word, gesture or act intended to insult the modesty of a woman.—Whoever, intending to insult the modesty of any woman, utters any word, makes any sound or gesture, or exhibits any object, intending that such word or sound shall be heard, or that such gesture or object shall be seen, by such woman, or intrudes upon the privacy of such woman, shall be punished with simple imprisonment for a term which may extend to one year, or with fine, or with both, Indian Penal Code