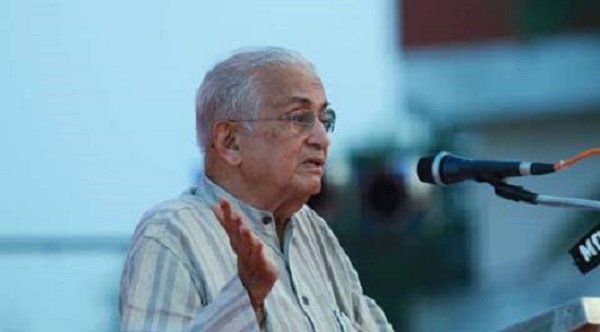 Justice Suresh died last night in his sleep. The lockdown prevents us from being with him at the funeral. I have known him for 30 years, through my activism days at Bombay, my practice in the Industrial Courts and the Bombay High Court and then as the Chairman of the Human Rights Law Network till his death. He had lived a good life, was happy and content till the end, though he railed...

Justice Suresh died last night in his sleep. The lockdown prevents us from being with him at the funeral. I have known him for 30 years, through my activism days at Bombay, my practice in the Industrial Courts and the Bombay High Court and then as the Chairman of the Human Rights Law Network till his death. He had lived a good life, was happy and content till the end, though he railed against injustice with increasing vigor with every passing day.

It was a joy arguing before him in the High Court. We knew that if it was a contract labor case he would protect their services. If it was a slum demolition case he would stay the eviction. No doubt about it. That was the nature of the Judge. He was unflinchingly in favor of the working people.

He had another Judge like him on the bench -Justice Daud- with whom we went for many fact findings into state atrocities. I have never met two Judges like them in my life.

Justice Suresh joined the High Court late. He would often complain to us that since he had radical views he was seldom assigned writ jurisdiction cases where he could hold the government to task. Rather he was given boring final hearing of suits and other civil matters.

It was his innings after he retired when he rose in stature as one of the finest human rights activists in the country.Human rights work gave him a new life and inexhaustible optimism and energy .He travelled the country on the invitation of leftist political formations and NGOs going to the areas where State atrocities had taken place, reaching immediately after the event to console the victims. He would sit among them sometimes for days collecting facts and recording testimonies. He would then come out with a report and do a press conference. The many reports that he completed during his lifetime, if recovered, would be an elaborate account of the major human rights violations in the country.

I went with him on many inquiries enjoying the travelling by train and by bus and on two occasions by canoe. I remember once while travelling somewhere in Karnataka, on my pleading, he readily agreed to stop the bus so that we could go swimming in the lake unmindful of the warnings of the locals that if was full of crocodiles.

The Manipur trip, where I went with Justice Suresh to elaborately document the rape, killings, torture, enforced disappearances and fake encounters by the Manipur Police and the para military forces was the high point of our lives. As we walked out of the airport we entered a different world with security forces racing up and down the road and people merging into the background. With calmness men, women and children told us of the incredible level of violence. I remember we interviewed a man who was holding his intestines out of his stomach in his hands.

I have no doubt that it was because he was a retired Judge that we were able to go to distant places, take photographs, holds meetings and make fiery speeches. That was the situation in every fact finding. Without Justice Suresh we would have been stopped at every stage and perhaps arrested repeatedly. With him we activist were like lions. He protected us, he encouraged us, even instigated us.

It was during that fact finding in Manipur that IromSharmila and Justice Suresh met. She was still studying. She followed us on a cycle, standing at the back of the crowd listening to the speeches. They obviously had a lasting effect. A few months later when the Manipur Police massacred people in the market in blind rage and retaliation for the killing of a Jawan, Sharmila went on a fast to death without consulting anyone. That was the beginning of her historic and inspiring protest against the Armed Forces Special Powers Act .

He probably lifted the spirits of tens of thousands of young activist who saw in his innate radicalism a confirmation of their own anger against injustice. He was loved dearly. He relished this love. It made him stronger and took away whatever loneliness he might have felt as he grew older. It took away the pain from his body when he went into his eighties and gave him stamina and endurance. He would stay in run down hotels without demur. He made no demands from those who had invited him to do fact findings. When he had friends around he would love to have a little drink.

After Justice Daud died, he often used to lament that they were no retired Judges left to carry on his work. He could not find anyone equally consistent, determined and ideologically firm. It was a new era of pompous globalized Judges who had lost their constitutional moorings.

He joined the Human Rights Law Network – a collective of 150 lawyers covering the country –and saw it grow from a small group of 3 stationed at Mumbai to a pro bono network crossing the country. Even when he was too indisposed to work he would come for the trustee meetings. It will be nigh impossible to replace him.

Towards the end of his life he was greatly distressed when the Bombay High Court took custody of his grand -daughter and gave her to her father. He loved the child dearly and it broke him to lose her. This was the only time I saw him despair .

When I hear of the death of a friend I am consoled by the fact that he did not suffer and went peacefully in his sleep. It is not death but the suffering before death that causes distress. I am sad for us – those he left behind who miss him terribly –but I am happy for him for he goes to a better place.