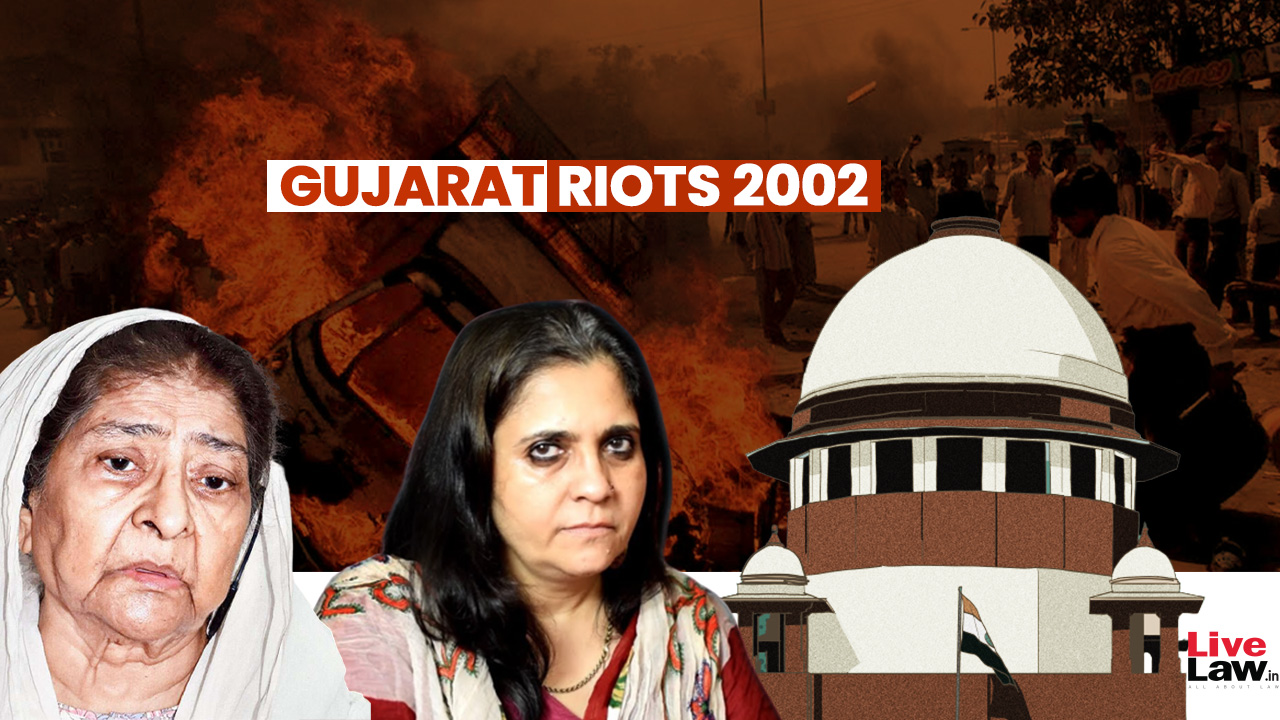 There is no evidence of larger conspiracy at the highest level of state functionaries behind the 2002 Gujarat riots, held the Supreme Court recently, dismissing a petition filed by Zakia Jafri. Jafri had questioned the closure report filed by the Court-appointed Special Investigation Team which exonerated the then Gujarat Chief Minister Narendra Modi and 60 other top officials.

The bench comprising Justices AM Khanwilkar, Dinesh Maheshwari and CT Ravikumar not only dismissed the petition but also adversely commented on the matter being pursued for nearly 16 years, "with the audacity to question the integrity of every functionary involved". The bench said that this was done "too keep with the pot boiling', "obviously, for ulterior design".

"As a matter of fact, all those involved in such abuse of process, need to be in the dock and proceeded with in accordance with law", the bench said. Emboldened by these remarks of the Supreme Court, the Gujarat police registered a new FIR alleging fabrication of evidence and institution of false proceedings and arrested activist Teesta Setalvad - the co-petitoner of Zakia Jafri, who had taken up cases of several riot victims- and former Gujarat ADGP RB Sreekumar, whose allegations against Narendra Modi in relation to riots handling were discarded by the SIT.

However, the Supreme Court of the years which immediately followed the 2002 riots was not at all sympathetic towards the Gujarat administration. The Court had then made several scathing observations against the State Government - both oral and written.

"I have no faith left in the prosecution and the Gujarat Government", Chief Justice of India VN Khare orally said on September 12, 2003, while hearing a plea seeking retrial in the Best Bakery case, in which the Courts in Gujarat acquitted all accused.

Nearly 7 months later, on April 12, 2004, the Supreme Court delivered a damning verdict, ordering retrial in the Best Bakery case(relating to killing of 14 persons during the riots), after expressing doubts about possibility of free and fair trial in Gujarat. The Court shifted the trial to the State of Maharashtra in view of the "glaringly demonstrating subversion of justice delivery system(in Gujarat) with no congeal and conducive atmosphere still prevailing".

In that judgment, the Court enumerated several lapses in the investigation and prosecution and commented that the justice delivery system was "allowed to be abused, misused and mutilated by subterfuge".

"The investigation appears to be perfunctory and anything but impartial without any definite object of finding out the truth and bringing to book those who were responsible for the crime. The public prosecutor appears to have acted more as a defence counsel than one whose duty was to present the truth before the Court….The role of the State Government also leaves much to be desired", the judgment delivered by a bench of Justices Doraiswamy Raju and Arijit Pasayat held.

The Court then embarked upon a harsh criticism of the State Government and went to the extent of terming the authorities "modern day Neros", who were looking elsewhere when innocent children and helpless women were burnt to death. Further, in a more damaging remark, which suggested not just an administrative negligence but a deliberate design, the Court said that the authorities "were probably deliberating how the perpetrators of the crime can be saved or protected".

The full remarks are as follows :

"Those who are responsible for protecting life and properties and ensuring that investigation is fair and proper seem to have shown no real anxiety. Large number of people had lost their lives. Whether the accused persons were really assailants or not could have been established by a fair and impartial investigation. The modern day 'Neros' were looking elsewhere when Best Bakery and innocent children and helpless women were burning, and were probably deliberating how the perpetrators of the crime can be saved or protected. Law and justice become flies in the hands of these "wanton boys". When fences start to swallow the crops, no scope will be left for survival of law and order or truth and justice".

In December 2004, the Supreme Court transferred the trial in a gang-rape case which happened during the riots, on the apprehensions of the victim and the CBI that witnesses could come to harm if the trial was held in Gujarat. Earlier in 2003, the Supreme Court had stayed the trial of 9 riots-cases in Gujarat on a petition filed by the National Human Rights Commission.

Eighteen years later, the Supreme Court in the Zakia Jafri case observed that the state government had taken "timely corrective measures, in right earnest" such as calling the army soon after the Godhra carnage. In this connection, KR Narayanan, who was the President of India during the 2002 riots, had made a statement in 2005 after he demitted office that though the military was sent, they were not given powers to shoot and that had they been given the power to shoot the rioters, the violence could have been averted. Narayanan had also made a startling comment that he felt the riots to be a conspiracy. In 2012, the Delhi High Court had ruled that the communications between the then Prime Minister AB Vajpayee and President Narayanan relating to 2002 riots cannot be disclosed.

In Zakia Jafri case judgment, the Supreme Court repeatedly states throughout that there is no evidence of meeting of minds at the higher echelons to suggest criminal conspiracy behind the riots. The Court says that the post-Godhra riots events took place in "quick succession" and that the Government was overrun by the spontaneity of the events.

The Court said that collapsing of state administration in times of emergency is not an unknown phenomenon. Pointing out that even the governments with the best of the facilities crumbled under pressure during COVID pandemic, the Court asked,"Can it be said to be a case of hatching of criminal conspiracy?"

"Breakdown of law-and-order situation if for short duration,cannot partake the colour of breakdown of rule of law or constitutional crisis. To put it differently, misgovernance or failure to maintain law-and-order during a brief period may not be a case of failure of constitutional machinery in the context of tenets embodied in Article 356 of the Constitution. There must be credible evidence regarding State sponsored breakdown of law-and-order situation; not spontaneous or isolated instances or events of failure of State administration to control the situation", the Court stated.

For the Supreme Court in 2004, the administration appeared like a "modern day Nero" who looked away when innocents were being killed; 18 years later, for the same Supreme Court, the situation appeared as a "misgovernance or failure to maintain law-and-order during a brief period" which do not amount to breakdown of constitutional machinery or criminal conspiracy.

In Zakia, the Court also cited the "repeated public assurances given by the then Chief Minister that guilty will be punished for their crime(s)" as one ground to rule out conspiracy. But the record of cases like Zahira Sheikh and the gang-rape case which were transferred out of Gujarat raise questions on whether such assurances were followed.