Gas Victims In A Pandemic 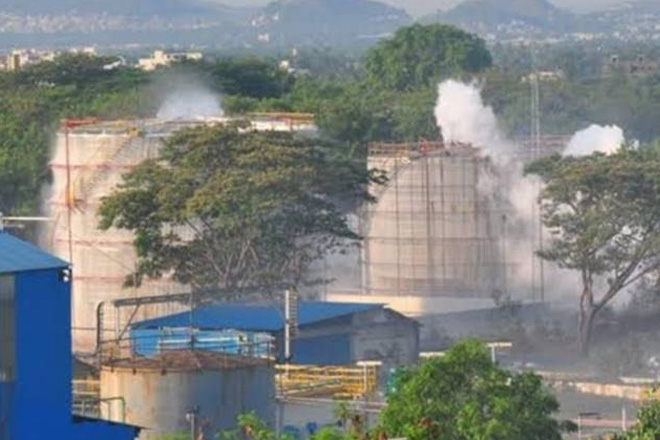 The news is that around 3 am this morning, poisonous styrene gas leaked from the LG Polymers Plant in Vishakapatnam killing scores of persons and impacting thousands. Many people were seen lying unconscious on the streets. Others complained of breathing difficulties, rashes on their bodies and sore eyes. Experts warn that groundwater in the area including borewells may get contaminated...

The news is that around 3 am this morning, poisonous styrene gas leaked from the LG Polymers Plant in Vishakapatnam killing scores of persons and impacting thousands. Many people were seen lying unconscious on the streets. Others complained of breathing difficulties, rashes on their bodies and sore eyes. Experts warn that groundwater in the area including borewells may get contaminated due to the gas leak. The Meghadrigedda reservoir that is said to supply water to the city is less than 2 km away. The gas leak at this Plant, which was reportedly shut since late March 2020 due to Covid 19 lockdown, brings back scenes reminiscent of the 1984 Bhopal gas tragedy.

As per press reports a few days ago, Covid 19 was taking a toll on the survivors of the Bhopal gas disaster, who were already leading a wretched existence. It was reported that weakened immunity, diabetes, hypertension, damaged lungs and kidneys – which are all due to exposure to the methyl isocyanate gas - made such survivors sitting ducks. The pandemic had also resulted in further delay of the determination of the curative petition which was filed by the Central Government before the Supreme Court seeking additional compensation of more than Rs. 7,000 crores from the Union Carbide Corporation (UCC), now owned by Dow, for loss of life and property and environmental contamination – a petition that was to be taken up for hearing in February 2020, about a decade after its filing.

Those following the tortuous twists and turns of the world's worst industrial disaster will readily agree that the manner in which India has handled the matter is a national shame. To start with, the plant was allowed to be set up in the heart of Bhopal city in violation of the law. The authorities permitted the area around the plant to be used for dumping of hazardous chemicals. By granting a licence to manufacture pesticides, the government made the collaboration agreement between UCC and and its subsidiary, Union Carbide India Limited (UCIL), subject to Indian laws which aim to safeguard human life from danger. Many central and state agencies, empowered under various acts like the Factories Act 1948, regulated at all times Carbide's operations. Further, various Indian investors, including Life Insurance Corporation of India (LIC), the Industrial Development Bank of India Limited (IDBI) and other public sector institutions, owned 49.1 per cent of UCIL. The implication of such regulation and holdings is that the government was as responsible as UCC/UCIL for the horrific gas leak on the night of 2 December 1984.

Shortly after the gas leak, the government proceeded to enact the Bhopal Gas Leak Disaster (Processing of Claims) Act 1985 which shockingly gave the Central Government, who was as guilty as UCC/UCIL, 'the exclusive right' to represent and act in place of the victims, whether within or outside India. The victims were precluded by this law from even asserting their claim against the government or UCC/UCIL. Regrettably, such patently unfair law was upheld in the five-judge decision of the Supreme Court in Charan Lal Sahu's case (1989) primarily on the grounds that it was passed in the exercise of sovereign power of the State and in recognition of the right of the sovereign to act as parens patriae (parent of the nation). Such view runs counter to the earlier eleven-judge decision of the Court in the 'Privy Purse' case (1971) that had inter alia held that there is no such thing as 'sovereign power of the State' under the Constitution, and that legal sovereignty vests in the Constitution and political sovereignty lies with the people of the country. Surely the statement that 'India is a sovereign State' implies that people (political sovereign) or the Constitution (legal sovereign) are sovereign — not that the State can exercise sovereign powers qua its own people from whom it derives its 'sovereignty'. As regards the doctrine of parens patriae, this has its roots in the common law concept of the 'royal prerogative' of the British Crown and includes the right of the British Crown to take care of its 'subjects' – a concept that does not fit well with a situation where the government itself is the wrong doer and is liable to its people.

The fallout of this Parliamentary Act was that one guilty party negotiated with another guilty party a paltry settlement amount in 1989, payable to the victims of the terrible disaster for which both were jointly liable. Sadly, even the official number of the deceased as also those injured did not reflect the situation on the ground. The Supreme Court, on its part, unbelievably approved the settlement term to quash all criminal proceedings – which it fortunately reviewed subsequently. Unsurprisingly, the Union Carbide Chairman, Warren Anderson, who had been allowed by the government to get away within days of the gas leak, preferred to be declared a proclaimed offender. Those who were put to trial were convicted on diluted charges and got away lightly. Then there were painful allegations of numerous illegalities in the matter of categorization, processing and adjudication of claims by the Deputy Welfare Commissioners under the settlement scheme, and of claimants being compelled to accept measly sums as settlement amounts at the Lok Adalats held under the scheme.

One can only wonder whether adequate compensation will ever be provided to the victims of the Bhopal gas tragedy, including the lakhs battling debilitating illnesses and deformities. Meanwhile, the survivors continue to suffer over the decades in disease and misery – only to get battered yet again now by the killer pandemic amidst the fragile public heath facilities. When the pitiable plight of the survivors has been dismissed from collective public memory, one does not even expect anyone to remember the haunting images of the thousands of men, women, children and babies being choked to death in their beds and on the streets – for which culpability has simply not been satisfactorily fixed. It remains to be seen whether the victims of today's Vishakapatnam gas leak fare any better. That we, as Indians, can live with such a sorry state of affairs tells its own story about the character of our society.