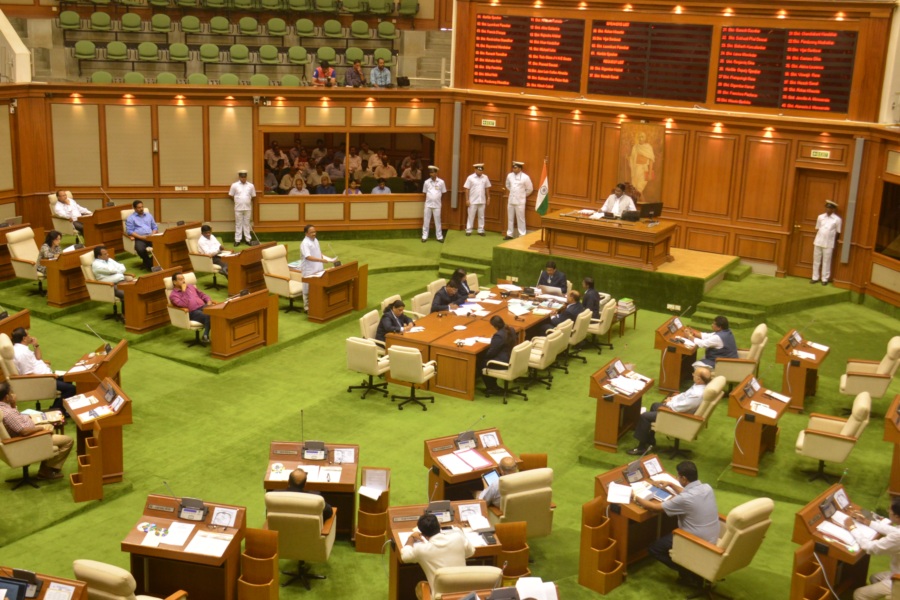 Borrowing words from the historic Freedom at Midnight ('Tryst with Destiny') speech of Pandit Jawaharlal Nehru to paint the midnight political drama in the Speaker's Chamber at the Goa Assembly Secretariat on March 27, would be parody. Nonetheless, when the whole India was asleep, at the midnight hour, Goa awakened to a new dawn of political darkness and illegitimate defections christened...

Borrowing words from the historic Freedom at Midnight ('Tryst with Destiny') speech of Pandit Jawaharlal Nehru to paint the midnight political drama in the Speaker's Chamber at the Goa Assembly Secretariat on March 27, would be parody. Nonetheless, when the whole India was asleep, at the midnight hour, Goa awakened to a new dawn of political darkness and illegitimate defections christened as merger at the unholy communion delivered by Deputy Speaker Michael Lobo, presently the Acting Speaker.

At the midnight hour of March 27, two out of the three MLAs namely Manohar Ajgaonkar and Deepak Prabhu Pauskar of the Maharashtrawadi Gomantak Party (MGP), a coalition partner in the recently formed Pramod Sawant led BJP government submit a letter to the Speaker in the presence of Chief Minister Pramod Sawant and State BJP President Vinay Tendulkar stating that the MGP legislature party is merged into the BJP. Based on a note prepared by the Legislature Secretariat at that hour, the Speaker consents to the same as merger as the two MLAs constitute two-thirds of the legislature party and instantly recognizes their claim to be MLAs of the BJP. Immediately thereafter, the MLAs inform the media that they were dissatisfied with the functioning of their party and that their party was most likely to take decisions which will affect the stability of the newly formed government. The Chief Minister and the State BJP President provide different versions of the so called merger on different occasions. In one media briefing, they claim that BJP will never poach MLAs of their coalition partners but anybody willing to join BJP is welcome. At another briefing, they indicate that the MGP is violating the coalition 'dharma' by putting up candidates against the BJP in the ensuing by-elections to the state assembly and justify the action of the entry of the two MGP MLAs into the BJP. At one moment, the story of their willing admission to the BJP is sold. At the next moment, the story that the BJP has to teach a lesson and clip the MGP is equally marketed.

None produces any material evidence of the merger of MGP except that the two MLAs constitute two-thirds of the legislature party. The actual fact is clandestinely camouflaged as merger to fit the same into the parameters of the Tenth Schedule to the Constitution of India and place it beyond the pale of defections. This is out and out a case of the two MLAs voluntarily giving up the membership of their original political party and joining another political party. Consequently, these two MLAs lose the membership of the House. They have left their original political party on whose symbol they contested elections and got elected. The two legislators should be deemed to have resigned from their political party. Resignation need not necessarily be express.

Under the Tenth Schedule, if a member voluntarily gives up membership of the political party to which he belongs and or joins any other political party after his elections, the member stands disqualified on account of defection. However, where original political party merges with another and the elected member thereby becomes a member of a new political party, it does not invite disqualification on grounds of defection. The additional proviso is that such group should not be less than two-thirds of the legislature party.

Para 4(1) of the tenth schedule enunciates the necessary condition of a valid merger. Para 4 (2) articulates the sufficient condition of a legal merger. Both the provisions together make the code of merger. Both are interdependent and when both the causes happen, the effect of merger is supposed to be the result.

In the current Goa case under reference, there is no claim of original political party of any decision of merger. There is also no claim of any split in original party either. Whether the issue should come first in the original political party or could happen latter after a decision by the legislature party could be debated. Logically, it needs to precede. But, there could be no debate on the fact that the claims should come from the original party as well as the legislature party for the merger to be lawful and complete.

As of now, we do not have any binding judicial precedent on this issue. In 2016, the Telengana Assembly Speaker allowed the merger of TDP legislature party with the TRS citing that 80% of TDP MLAs (12 out of 15) joined the ruling TRS. It would not be out of place to visit the December 1990 ruling of Dr. Kashinath Jhalmi, member of the Legislative Assembly of Goa elected by the House then to decide on the disqualification petition against the then Speaker, Dr. Luis Proto Barbosa who himself defected to become the Chief Minister. To quote "Mere numbers do not remove the disqualification. One-third of the members are no less liable if they abandon membership simultaneously. They are exempted only if they quit the Legislature Party as a result of split in the party outside. Proof of this wider split is essential to the application of exemption clause". Dr. Jhalmi further stated in his order that "A split is different from a conspiracy since a split is open. In a split, disagreements over policy or leadership are ventilated openly in the party and the leaders of the conflicting sides' part company". We can deduce analogy from the reasoning above to apply it to the current issue of merger as exemption against defection and disqualification.

Is the Speaker biased?

One thing is clear. The law is not respected. MLAs hold it in contempt. The Speaker treats it with indifference and disrespect. Against the current case described as merger which in straight language is voluntarily joining a new political party by the two MGP MLAs, a petition of disqualification is imperative. The threat of split or merger was not even made imminent. Nothing like split or merger happened. Was there anything like common decisions, deliberations, and differences of opinion for merger or against? The answer is a big no. One fine evening and at the dead of night, two MLAs flout letter of merger before the Speaker. The Speaker blows the whistle and declares the goal.

Initially, the petition of disqualification will have to be before the Speaker even knowing well the prejudices and biases. The greater probability is that the Speaker would keep the dispute hanging to pre-empt a judicial review. Under the tenth schedule, there is no time limit for the Speaker to dispose the dispute. It could also happen that the period of the current Assembly could lapse with Speaker not deciding.

In such a deadlock, the ruling of the Supreme Court in Rajendra Singh Rana v/s Swami Prasad Maurya (2007) could come handy for the petitioner. The Court has recorded that if the Speaker fails to act on a complaint or accepts claims of splits or mergers without making a finding, he fails to act as per the tenth schedule. Ignoring a petition for disqualification is not merely an irregularity but a violation of constitutional duties.