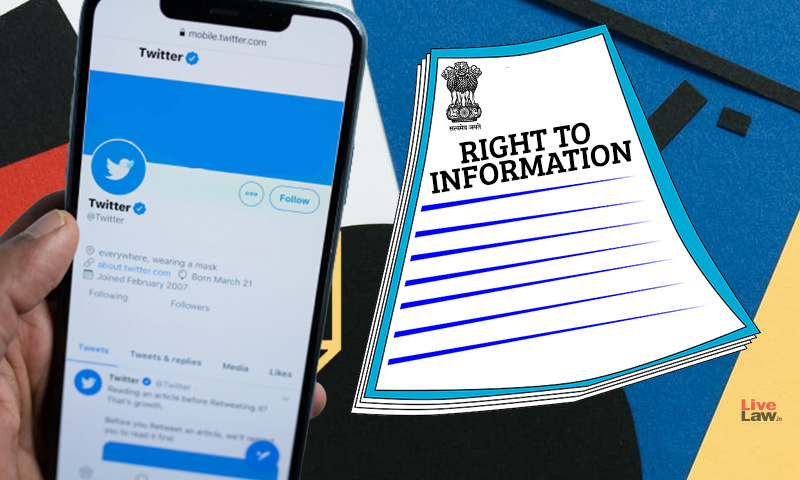 For information like money spent on advertisements, accounts blocked, audience targeted, and other stats, can the Twitter handle of let's say the Prime Minister - which is not independent of his prime ministry - be considered a 'body' under the definition of 'public authority' in the RTI Act? It is not Twitter, the platform, which is mooted to be under RTI scrutiny but an account of...

For information like money spent on advertisements, accounts blocked, audience targeted, and other stats, can the Twitter handle of let's say the Prime Minister - which is not independent of his prime ministry - be considered a 'body' under the definition of 'public authority' in the RTI Act?

It is not Twitter, the platform, which is mooted to be under RTI scrutiny but an account of the Government on Twitter. Government accounts, such as that of the Prime Minister, are utilized for official purposes i.e for discharging public functions. Such an account is used as a channel for communicating and interacting with the public about his administration. The PM's tweets produce a high level of mass engagement. The Account and the webpage associated with it as well bear all the trappings of an official, state‐run account.

The tweets of the Prime Minister's account show him to be engaged in the performance of his official duties such as announcing policies, publicizing legislations, delivering speeches, meeting with dignitaries, etc. The account is, thus, used by the Prime Minister, in his official capacity not his personal capacity. In addition, other Twitter accounts of the Government go further and engage in real-time communication, such as resolving grievances of the public. Further, the tweets would constitute 'public records' by 'record creating agencies' such as the PMO, under the Public Records Act, 1993.

What is an 'authority'?

Krishna Iyer, J. has defined 'authority' from the Law Lexicon by P. Ramnath Iyer to say that an "Authority is a body having jurisdiction in certain matters of a public nature" and from Salmond's Jurisprudence, to say that the "ability conferred upon a person by the law to alter, by his own will directed to that end, the rights, duties, liabilities or other legal relations, either of himself or of other persons," must be present in addition to constitute an 'authority'.

A Governmental Twitter account has the ability to affect the rights and liabilities of a user which may have far-reaching consequences, and thus can be considered an authority. For example, a federal court of appeals in the US reaffirmed the holding that the blocking of certain users by the account of the President while in power violates their freedom of speech, and of press, and that the "interactive space" associated with tweets constitutes a 'public forum'.

The Twitter account of the Prime Minister, for example, was intentionally opened for public discussion and the PM, upon assuming office, uses the Account as an official vehicle for governance and has made its interactive features accessible to the public. Such a space constitutes a public forum.

An authority as an 'instrumentality or agency'

It has been held by the Supreme Court that "any entity having a juridical existence" would be considered to be an instrumentality or agency of the State, if it is found on having found to be "an alter ego, a double or a proxy or a limb or an off-spring or a mini-incarnation or a vicarious creature or a surrogate and so on, by whatever name called, of the State".

It has also been held by the Supreme Court that whether an independent entity satisfies the test of instrumentality or agency of the government does not depend on whether it owes its origin to any particular Statute or Order but really depends upon a combination of one or more of the relevant factors, depending upon the essentiality and overwhelming nature of such factors in identifying the real source of governing power, if need be, by piercing the corporate veil of the entity concerned.

Further, it has been held by the Central Information Commission (CIC) that an instrumentality or agency of the State is to be treated as a public authority.

What is a public authority?

A public authority, as has been held by the Supreme Court, is a body which has public or statutory duties to perform and which performs those duties and carries out its transactions for the benefit of the public and not for private profit.

A 'public authority' under the RTI Act, 2005 has been defined as follows –

(a) by or under the Constitution;

(b) by any other law made by Parliament;

(c) by any other law made by State Legislature;

(d) by notification issued or order made by the appropriate Government,

directly or indirectly by funds provided by the appropriate Government;"

It has also been held by the Supreme Court that the word 'includes' when used, "enlarges the meaning of the expression defined so as to comprehend not only such things as they signify according to their natural import but also those things which the clause declares that they shall include", thus expanding the horizon of the word 'public authority'.

Therefore, in accordance with the rule of ejusdem generis, the definition can be extended to include an official Twitter account that is owned and controlled by the Government and is used for discharging public functions. More so when the definition of 'public authority' under the RTI Act, 2005 has a wider meaning even than that of 'State' under Article 12.

The words "Any person or authority" used in Article 226 are broad enough to cover any other person or body performing public duty. The form of the body concerned is not very much relevant, as has been held by the Supreme Court. Thus, an account in its abstract form is a representation of the state, and is involved in discharging public functions and thus, can be amenable to writ jurisdiction under article 226 as well for the enforcement of non-fundamental, statutory rights under the RTI Act, in addition to fundamental rights under article 32.