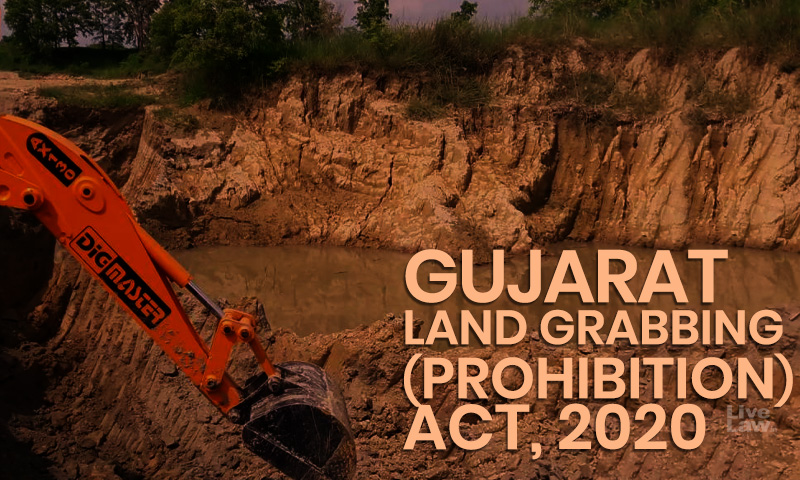 The Gujarat Land Grabbing (Prohibition) Act, 2020 (Hereafter, referred to as "the Act" for convenience) has been enacted by the Government of Gujarat by notifying the same in the Gujarat government Gazette/extraordinary volume LXI dated 09/10/2020 and the same has been brought into force from 29/08/2020. From the reading of the Act, it is clear that it is a special law providing civil...

The Gujarat Land Grabbing (Prohibition) Act, 2020 (Hereafter, referred to as "the Act" for convenience) has been enacted by the Government of Gujarat by notifying the same in the Gujarat government Gazette/extraordinary volume LXI dated 09/10/2020 and the same has been brought into force from 29/08/2020. From the reading of the Act, it is clear that it is a special law providing civil and criminal remedies and liabilities under one roof with regard to the act of land grabbing. It provides for the establishment of Special Courts for adjudicating the disputes pertaining to land grabbing either by way of criminal prosecution or a civil proceeding (Refer to Section 7). The Act provides for the constitution of a committee to be notified by the state government under the chairmanship of the District Collector which will primarily consider all applications or complaints pertaining to land grabbing. Under Section 9 of the Act, the special court is invested with jurisdiction to decide either suo-motu or any application made by any person or any officer authorized by District Collector to take cognizance and try every case arising out of the alleged act of land grabbing or with respect to the ownership and title to or lawful possession of the land grabbed. The Special Court has the power to refer the complaint or application to the committee for its finding. Section 15 of the Act gives an overriding effect to this special law over any other law for the time being in force or custom, usage or agreement or decree or order of the court or any other tribunal or authority. The Act contains several provisions which are controversial and which will have to pass the test of constitutional validity.

The Act not only applies to any government or municipal land grabbed by any person but it also applies to a private land grabbed by any other person. In short, it would apply in respect of rival claims made by two private individuals against each other in respect of ownership, title or possession of the land where one of them may claim that the other has grabbed the land without any title or ownership or lawful reason for possessing the land.

The most controversial provisions of the Act are Section 4 (2), Section 9, Section 11, Section 15 and Section 17. In order to appreciate the constitutionality of the aforesaid provisions at least the following definitions are required to be kept in mind:

Section 2(d): "land grabber" means a person who commits land grabbing and includes any person who gives financial aid to any person for taking illegal possession of lands or for construction of unauthorized structures thereon, or who collects or attempts to collect from any occupiers of such lands rent, compensation and other charges by criminal intimidation, or who abets the doing of any of the above-mentioned acts, and also includes the successors-in-interest;

Section 2(e): "land grabbing" means every activity of land grabber to occupy or attempt to occupy with or without the use of force, threat, intimidation and deceit, any land (whether belonging to the Government, a Public Sector Undertaking, a local authority, a religious or charitable institution or any other private person) over which he or they have no ownership, title or physical possession, without any lawful entitlement and with a view to illegally taking possession of such land or creating illegal tenancies or lease or license, agreements or transfer or sale or by constructing unauthorized structures thereon for sale or hire or use or occupation of such unauthorized structures and the term "grabbed land" shall be construed accordingly;

Section 3 of the Act is in the nature of a declaration that the land grabbing in any form is prohibited, made unlawful and it is an offence punishable under the Act. Meaning thereby it will have to be applied prospectively from the date when the Act was brought into force and therefore naturally it cannot be applied to any act of encroachment, land grabbing or to persons in settled possession without lawful title over the land prior to the enforcement of the Act. However, surprisingly section 4(2) declares that any person who owns or after the commencement of this act continues is to be in occupation otherwise than as a lawful tenant, of a grabbed land shall be guilty of an offence under this Act. The land grabber upon conviction is liable to be punished with imprisonment for a term which shall not be less than ten years but may be extended to fourteen years and with fine which may be extended to the Jantri Value of such properties.

Section 4 (2) covers within its sweep a person who continues is to be in the occupation or who retains his possession of the land which might have commenced long back prior to the enactment of the Act and make them liable for the commission of an offence. The natural corollary of the above said provision is that a person who is in settled possession but having no document of title or ownership will have to voluntarily surrender his possession of the land to the lawful owner of the land immediately failing which he can be prosecuted and punished for an act which was innocent prior to the enactment of the Act.

Section 9 also provides for taking an action by the Special Court in respect of the land grabbed whether before or after the commencement of the Act. Thus, the Act has retrospective applicability and it makes the past innocent act as an offence by post facto law which violates the fundamental rights guaranteed under Article 20 of the Constitution of India. Article 20 clearly prohibits retrospective effect to be given to a criminal law creating an offence.

Besides the aforementioned legal and constitutional issues, the implementation of the Act has many serious practical difficulties. It is interesting to note that despite all flaws mentioned above the state Government has started enforcing Act and prosecuting people without creating the corresponding infrastructure of Special Courts. The Act would require the establishment of special courts in every district. Secondly, the Collector of every district who is already overburdened with the revenue administration, having extensive jurisdiction under the provision of Code of Criminal Procedure, functioning in the capacity of the District Magistrate under the preventive detention laws, carrying out election duties and many other functions under other laws will be flooded with all such litigations pertaining to even private individuals which would create havoc in the functioning of the Collectorates. Considering the nature of the provisions of the Act the Collector will not be in a position to carry out other functions except examining all types of grievances pertaining to private land-property disputes and disputes between government and private individuals. Therefore, the provisions of the Act are not even in the interest of general revenue, civil and criminal administration.

The Rules framed under the Act are also ultra vires and unconstitutional as the Rules do not specifically provide for giving an opportunity to the person affected by the inquiry to be conducted under Act by the inquiry committee. Rule 5 (10) provides for submission of the final report by Police within 30 days of the registration of the FIR which is absolutely unreasonable as the property and land disputes involve many complex legal and factual issues for which the police authority is inept to conduct the investigation. Even if they are held to have the competence to understand such complex issues, the period of 30 days for investigation is absolutely insufficient and not in tune with section 167 of Criminal Procedure Code which provides for 60 or days 90 days for submitting final report after the registration of the FIR and arrest.

The provisions aforesaid are therefore unconstitutional and liable to be struck down. A careful examination of the provisions of the Act reflects that it is indeed slapdash legislation enacted without proper vision.

(Author is a Senior Advocate at the Gujarat High Court)