x
Trigger Warning : Details of sexual violence could be disturbing.

In the horrific Hathras case, the Uttar Pradesh Government has filed an affidavit in the Supreme Court, taking the stand that no rape happened with the 19-year old Dalit woman.To support such a stand, the affidavit made reference to the 'Final Opinion' given by the Department of Forensic Medicine, Jawaharlal Nehru Medical College, Aligarh,on October 3, which stated :There are no signs...

In the horrific Hathras case, the Uttar Pradesh Government has filed an affidavit in the Supreme Court, taking the stand that no rape happened with the 19-year old Dalit woman.

To support such a stand, the affidavit made reference to the 'Final Opinion' given by the Department of Forensic Medicine, Jawaharlal Nehru Medical College, Aligarh,on October 3, which stated : 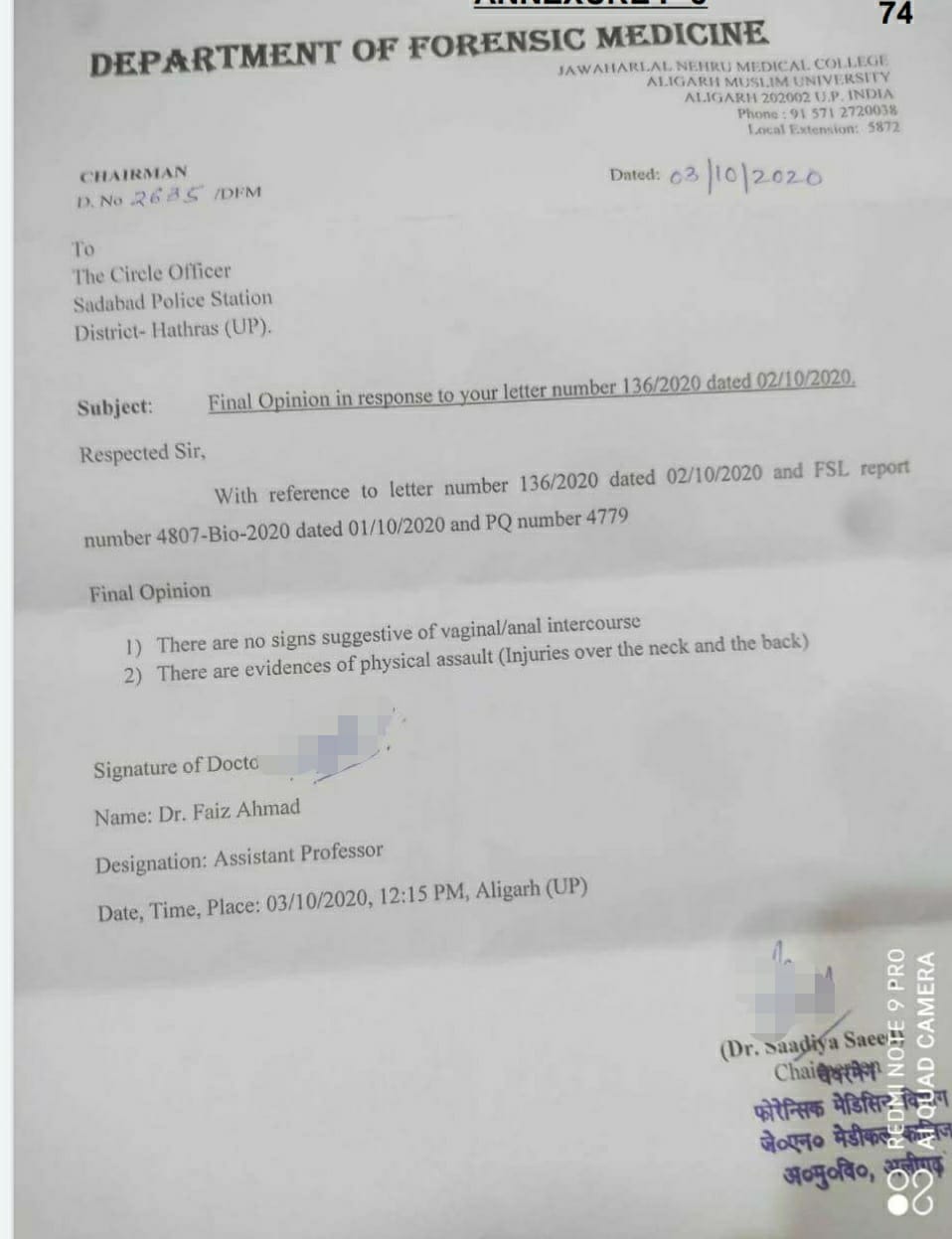 This opinion, stated to be based on the report of the Forensic Science Laboratory, Agra, is projected as contradicting the oral statements given by the victim that she was raped by four men - Sandeep Sing, Luvkush Singh, Ravi Singh and Ramu Singh.

In such a scenario of a seeming contradiction between the oral statements of the victim and the forensic evidence, which one should prevail?

Before seeking the answer to that question, let us understand the chronology of events for a better grasp.

The horrific crime, as it unfolded

As per the police records, the crime is stated to have happened at around 9.30 AM on September 14.

The Chandapa Police Station, Hathras District, registered an FIR at around 10.30 AM based on the statement of the victim's brother that her sister was attempted to be strangulated by Sandeep.

The FIR was initially registered for the offence of attempt to murder under Section 307 of the Indian Penal Code. The victim was first taken to Hathras Government hospital; but as the injuries were serious, she was urgently referred to JN Medical College, Aligarh.

It was at Aligarh hospital that her Medico-Legal Examination Certificate was prepared. The MLC recorded the statement of the patient's attendant that she sustained a neck injury due to strangulation, presumably because the victim was noted to be in a state of loss of consciousness. 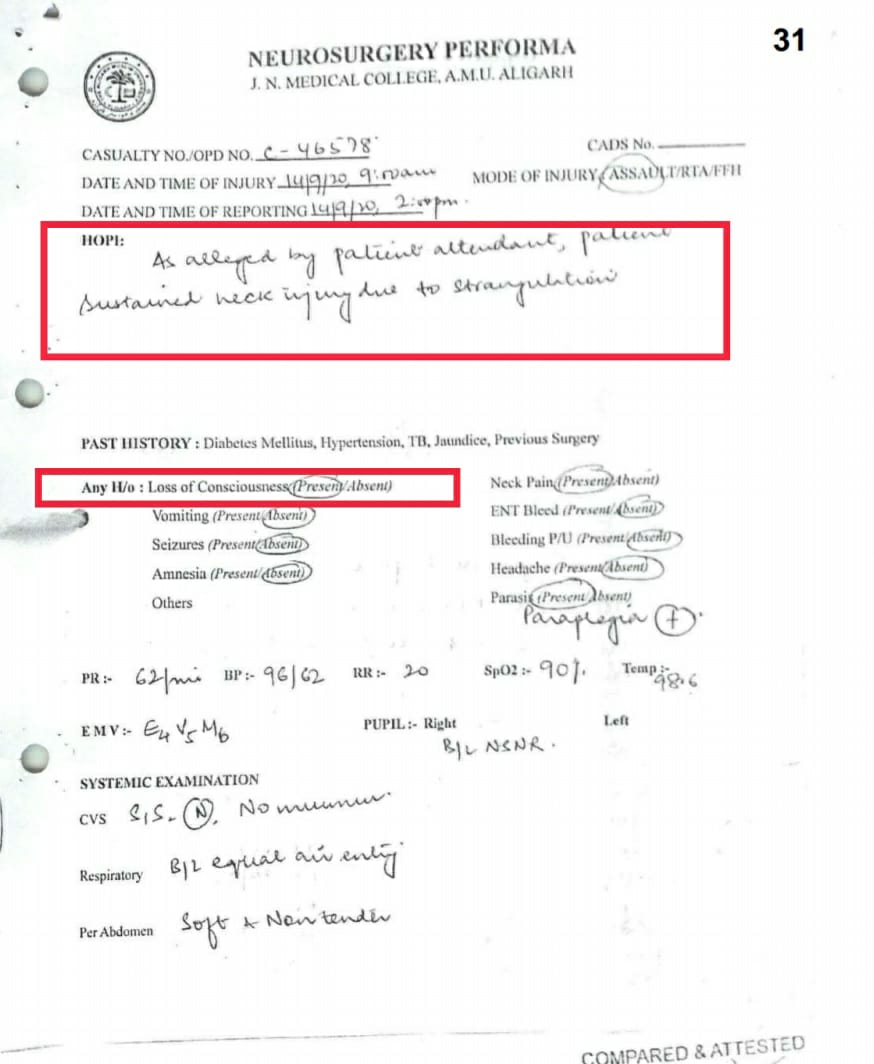 As per the UP Government affidavit, it was on September 19 that the statement of the victim was first recorded by the police under Section 161 of the Code of Criminal Procedure. In that statement, she said that she was molested by Sandeep.

On September 21, when the victim's health started deteriorating, her parents told the police that she wanted to give an additional statement. It was on September 22, when the police came to record her statement again, that she spoke of rape committed on her, not just by accused Sandeep, but also by the remaining 3 accused.

"...when my mother and I had gone to fetch fodder, then Sandeep, Ramu, Luvkush and Ravi of my village have committed rape on me. Sandeep then strangulated me with dupatta", she said.

When the woman constable asked her why she had not disclosed these facts earlier, the victim said that she was not in her complete senses then.

It was only after the victim gave this revised statement about the gang-rape committed on her that the JN Hospital at Aligarh conducted her medical examination for rape in terms of Section 164A of the Code of Criminal Procedure.  The  'Sexual Assault Forensic Examination Report', prepared on September 22, has some crucial entries.

The report records the details of the sexual assault provided by the victim. It states that the victim said that there was complete penetration of vagina by penis and that she was strangulated with her dupatta.

The report further states that the victim said that she had lost consciousness after the incident. 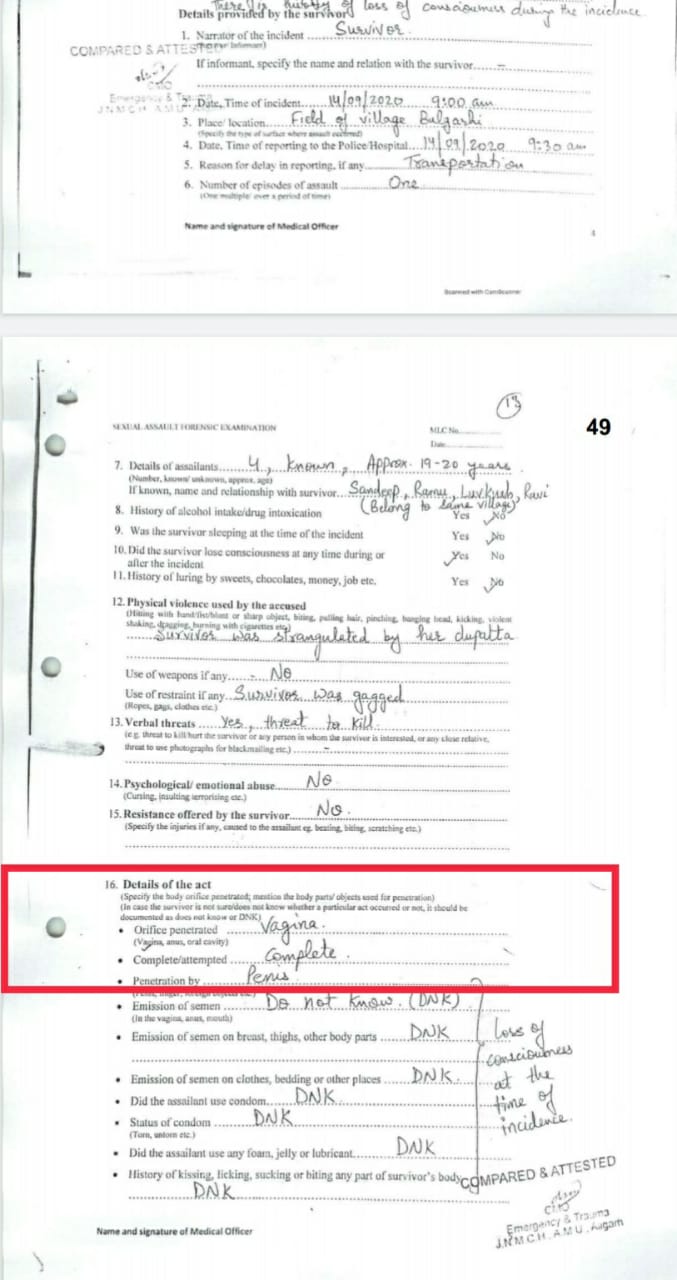 The report also noted that there were no abrasions, contusions, lacerations or swellings found in the vaginal region. It further noted that healed abrasions were present over the back and buttocks.

The report also stated the UV examination of the body (for detection of sperm samples) was not done "because the body was wiped several times".

The report made a provisional opinion that :

"On the basis of local examination, I am of the opinion that there are signs of use of force however opinion regarding penetrative intercourse is reserved pending availability of FSL report". 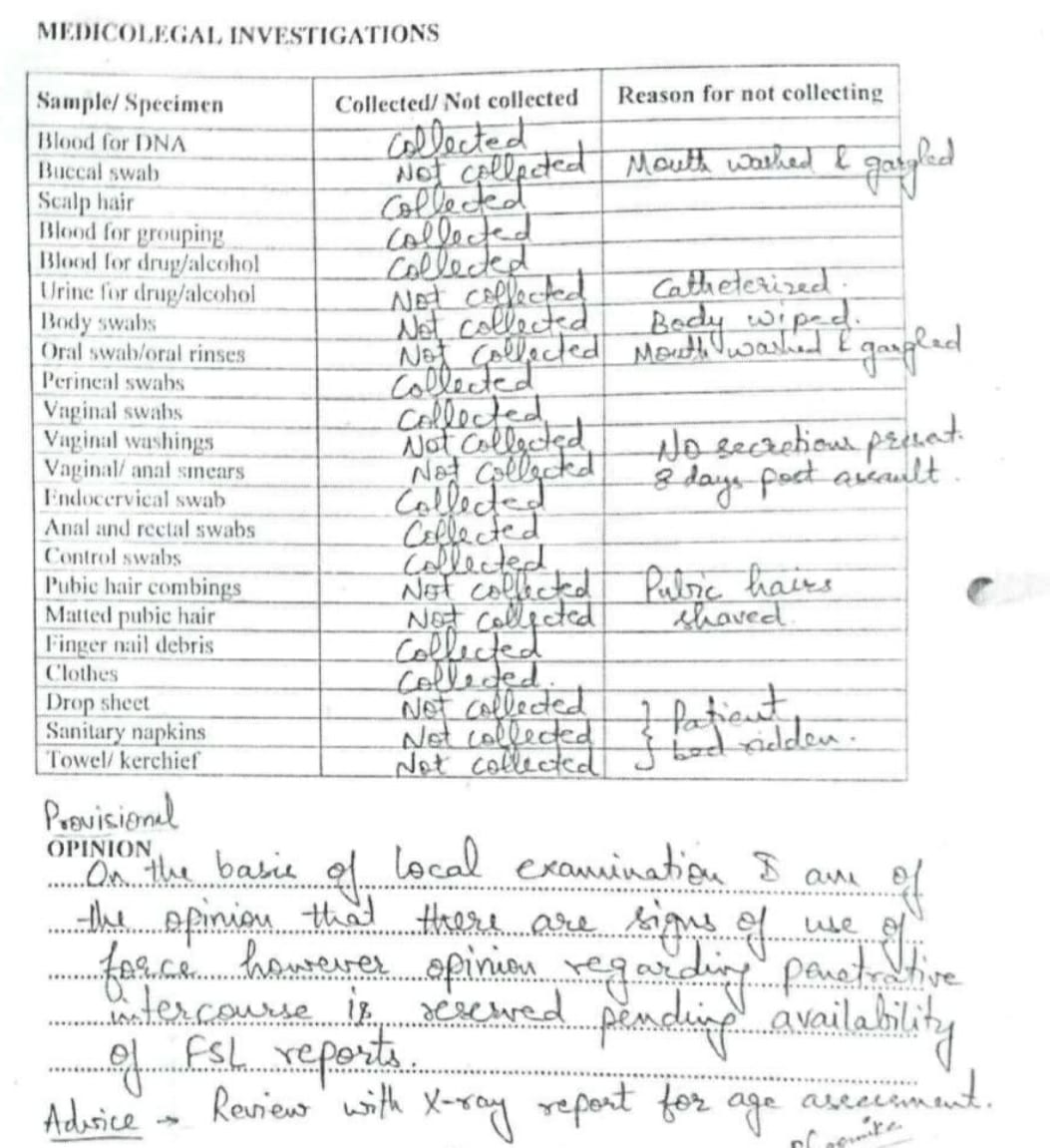 It is pertinent to note that it was only on September 22 that her vaginal swabs were collected and sent for forensic analysis -that is, eight days after the date of crime. This delay makes the detection of semen particles highly impossible as they are not known to survive outside the body beyond 2-3 days. It is also relevant to notice that the victim's body was washed and wiped several times during her treatment at the hospital, as noted in the report. 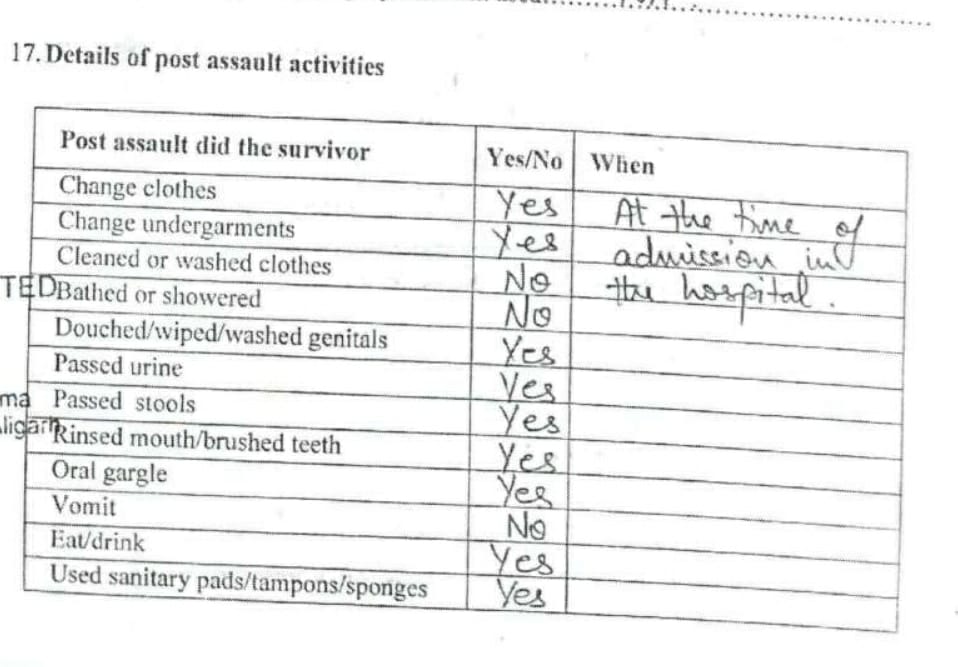 The Forensic Science Laboratory, Agra could not detect any sperm samples in the vaginal swab, as expected, and this was cited by the UP Police to rule out rape in the case. In another article, it was explained that the mere absence of sperm in the victim's body will not prove that rape did not take place and that the police claim was legally untenable.

Hathras Case : Presence Of Sperm Not Necessary To Prove Rape; UP Police Claim Contrary To Law

Now, let us discuss what ought to prevail in the conflict between the victim's oral statements and forensic findings.

It is only when the medical evidence totally makes the oral evidence improbable, that it becomes relevant to disbelieve the oral testimony.

Relevant to refer to a quote from the SC decision in Abdul Sayeed and others vs State of Madhya Pradesh and others (2010) 10 SCC 259.

"..it is trite law that oral evidence has to get primacy and medical evidence is basically opinionative. It is only when the medical evidence specifically rules out the injury as is claimed to have been inflicted as per the oral testimony, then only in a given case the court has to draw adverse inference", the SC observed in Ramanand Yadav v. Prabhu Nath Jha.

In the light of these legal principles, let us analyze the relevant facts of the instant case.

Here, the victim has consistently spoken about gangrape to the police (in the statement recorded on September 22) and also to the doctor at JLN Hospital, Aligarh during sexual assault examination.

The FIR and the first Medico-Legal Certificate did not have mention of the sexual crime as they were based on the statements of the victim's brother and her attendant at the hospital, respectively.

As to why the fact of rape was not mentioned before September 22,  the victim has given a probable explanation that she was not in her complete senses earlier.

Her statements have also been reportedly recorded by the Magistrate under Section 164 of the Code of Criminal Procedure.

So, the victim has given three consistent versions to the police, the doctor and the magistrate about the gangrape committed on her by the four accused persons. When compared to these consistent statements, the forensic report, which is based on a swab collected eight days after the crime, that too after the body was washed and wiped multiple times, looks weak.

The forensic evidence in the case does not seem to be strong enough to discredit the oral evidence, as per the yardsticks laid down by SC precedents.

It is also worthwhile to note that dying declarations can be the sole basis for convictions, even without any independent corroboration(Khushal Rao v. State of Bombay AIR 1958 SC 22, Kusa v. State of Orissa 1980 2 SCC 207 and K.R. Reddy v. Public Prosecutor 1976 SCC (3) 618).