Hounding Of 'The Wire' : Is This The Crucifixion Of Free Press And Democracy? 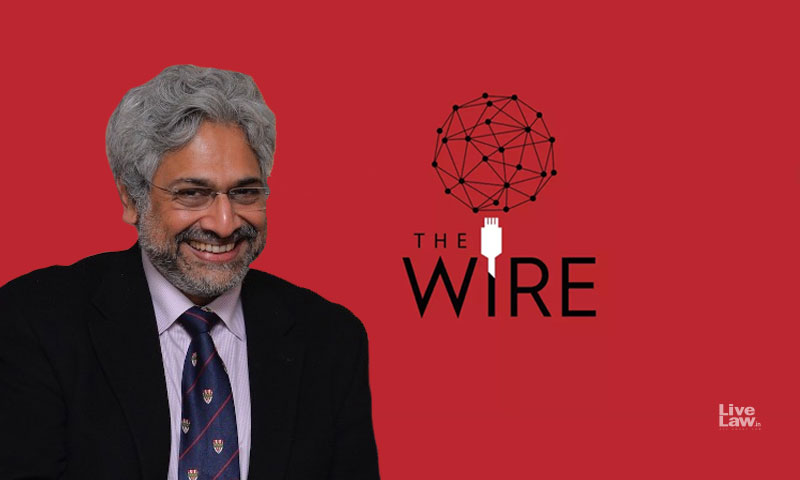 "The press was to serve the governed, not the governors. The Government's power to censor the press was abolished so that the press would remain forever free to censure the Government". Hugo Black J. and William O Douglas J, majority opinion in New York Times Co. v. United States June 30, 1971Implicit in the actions the establishment uses to muzzle the press, is the silent and...

Implicit in the actions the establishment uses to muzzle the press, is the silent and persuasive rhetoric which is implemented through the constabulary. With the judiciary's languid response, "we will not interfere with the investigation", terror is embedded onto the ecosystem of free speech. The technique is age old. And the response is as ancient as 'Pontius Pilate' washing his hands off in the most celebrated murder.

THE CURIOUS CASE OF THE WIRE

Sidharth Varadarajan had written an article on his twitter account attributing the comment, that 'Lord Ram would protect devotees from the coronavirus', to the UP Chief Minister Yogi Adityanath. The next day, he posted a correction noting that the statement had been made not by the CM of UP, but by Acharya Paramhans, the head of the Ayodhya temple trust. Commonsensically, and even in conservative legalese, the matter ought to have rested there. But this correction does not prevent a FIR to be instituted by a stranger to the controversy in Ayodhya 650 kms away from where S.Varadarajan lives.

The notice was carried by the UP Police personnel demanded his appearance on 14 April. There is a countrywide lock down. Intimidation of the free press is writ large in the manner and methodology deployed by the police machinery.

But why does this brazen attack at all take place against the press in the broad daylight of a free constitution. It serves a dual purpose for the political establishment. Firstly, It acts as exemplary intimidation of one, and expects the terror will ensure silence of the multitude. Also, it acts as a barometer to test the response of the courts to its brazenness. The eminent American journalist H.L.Mencken noted as early as 1950, "Their usual plan is to invade the constitution stealthily, and then wait to see what happens. If nothing happens they go on more boldly."

THE CHILLING CHRONOLOGY OF JUDICIAL RESPONSE

There is a chilling chronology of cases of the Supreme Court of India in recent years when it came to the liberties of men and women. First of the cases was when Kanhaiya Kumar was brought into the Patiala House Courts on charges of sedition and assaulted on the court premises. The court-appointed a committee of Mr.Kapil Sibal,Sr.Adv., Dr.Rajeev Dhawan,Sr.Adv., Mr. Dushyant Dave, Sr.Adv., Mr. H.P. Rawal, Sr.Adv., Mr. Ajit K. Sinha, Sr. Adv. and Mr. A.D.N. Rao, learned counsel to proceed to the Patiala House Courts Complex and report the situation prevailing there. The lawyer's committee filed a report about the violent incidents of 17th February. The report is a chilling account of what these senior lawyers witnessed first hand of the complete breakdown of the rule of law unparalleled in Independent India. They gave a graphic description of how lawyers and journalists were locked inside the court room and Kanhaiya Kumar was badly beaten up by lawyers, while police did nothing to prevent it.The Supreme Court followed the conventional path of letting the trial court decide nevertheless. Instead of assuming jurisdiction and hearing his bail sent him back to the courts where lumpens not only endangered his life but allowed an atmosphere of fear to permeate to the justice administration system. Later Supreme Court dismissed a plea for a Special Investigation Team (SIT) probe on the basis of the report of the senior lawyers on the attacks on him at the Patiala House Courts complex in February 2016. Rejecting the prayer, a Bench led by Justice Ranjan Gogoi said "We don't want to flog a dead horse back into life"

Second, was the incarceration of some of the most brilliant minds in this country: Sudhir Dhawale, a Mumbai-based Dalit rights activist; Surendra Gadling is a lawyer; Mahesh Raut, who works on displacement issues; Shoma Sen, a retired university professor; Rona Wilson, a Delhi-based prisoners' rights activist; Arun Ferreira is a rights advocate; Sudha Bharadwaj is a Harvard decorated lawyer; writer Varavara Rao is an eminent poet, literary critic and journalist; and Vernon Gonsalves is academic. The judgment dealing with their liberties in Romila Thapar v. Union of India delivered by the majority could not come up with a response for the liberty of these eminent men and women. The dissenting judgment laid the roadmap to rein in the malaise of a vindictive criminal administration system. But a dissent is a lodestar.

Third, was the nightmarish situation faced by the lawyers of the Senior Counsel, P.Chidambaram. His lawyers moved from court to court running for listing for hearing of his bail. Attempts to get the bail listed before the courts ended up a cropper, resulting in his arrest, a prolonged incarceration and subsequent bail granted by a reasoned judgment of Justice R.Banumati and Justice A.S.Bopanna.

Fourth, was the refusal to grant anticipatory bail to the eminent dalit scholar Anand Telmude and Gautam Navlakha, a noted civil rights activist and consulting editor of the Economic and Political Weeklyby the Supreme Court. Romilla Thapar and other's appeal to "restore public confidence in our constitution and the civil liberties that it guarantees to all citizens" was just, by now, howling against the wind.

Each of these cases in the chronology is a bolder and bolder attempt at testing the judicial will. Sadly it is also an indicator of how far the courts have travelled from the jealous protection of human liberties.

It was eerily ironic that Anand Telmude, grandson-in-law of Dr B R Ambedkar surrendered and was arrested on the 129th birth anniversary of the father of our constitution. It is interesting to note what Ambedkar had to say about the critics within the Constituent Assembly viz. Kamath, Dr. P.S. Deshmukh, Sidhva, Prof. Saxena, Pandit Thakur, Das Bhargava, Prof. K.T Shah and Pandit Hirday Nath Kunzru.

"That I was not prepared to accept their suggestions does not diminish the value of their suggestions nor lessen the service they have rendered to the Assembly in enlivening its proceedings. I am grateful to them. But for them, I would not have had the opportunity which I got for expounding the principles underlying the Constitution which was more important than the mere mechanical work of passing the Constitution."

When these instances of judicial indifference is alluded to, there is always the smug question, "was it possible for the Supreme Court to intervene in favour of liberties?" Loaded in the response is that our judiciary cannot go beyond the Lakshman Rekha of the an ancient Anglo-Saxon jurisprudence. The answer to the question is an undoubted 'yes'. Even Supreme Courts from the most conservative Anglo-Saxon jurisdictions have spectacularly come to the rescue of democracies. Two instances come to the fore. First, the intervention of the Srilankan Supreme Court when President Maithripala Sirisena of Sri Lanka dismissed the Parliament before the constitutionally mandated tenure came to an end. Similarly in September 2019, 11 judges of the Supreme Court of United Kingdom, unanimously delivered a verdict reversing the decision of the Prime Minister Boris Johnson to prorogue the Parliament.

Before the ink dries on this article, Prashant Bhushan's tweet has invited a notice to be served on him from Rajkot which is 1100 kms away from Delhi. Weaponizing prosecution against the exercise of free speech is eroding the foundations of democratic discourse. It was Harry S. Truman who, incidentally, addressing on the Internal Security of the United States on August 8, 1950 said "Once a government is committed to the principle of silencing the voice of opposition, it has only one way to go, and that is down the path of increasingly repressive measures, until it becomes a source of terror to all its citizens and creates a country where everyone lives in fear." . It reads as if he is writing for today's time and age.

Justice Deepak Gupta in his remarkable speech on democracy and dissent so effectively conveyed the raison d'etre of the constitution when he simply read the preamble and pithily demonstrated "WE, THE PEOPLE OF INDIA, having solemnly resolved ….... to secure to all its citizens: .. LIBERTY of thought, expression, belief….." When did this constitutional promise evaporate or get diluted?

INDIAN COURTS AT THE CROSSROADS OF HISTORY

Free speech is ever more important as we are in the midst of a hitherto unfathomable and uncharted pandemic. The pandemic has hit the shores of five continents. Information, scientific studies, statistical data is being relayed at the speed of light across jurisdictions. A case in point is the war on HIV/AIDS which was won with the concerted efforts of scientists, doctors, politicians, journalists, civil society and social workers. Journalists and rebel pharmaceutical companies like CIPLA who successfully waged a war to bring down the extortionate cost of retroviral drugs. It is a relentless exchange of information, be it scientific data, ground level human conditions, information on responses to drugs, information on the availability of hospital spaces, medical equipment, medicines, the nutritional condition of the poor and impoverished. The list of information being exchanged is endless.

It is appropriate in these trying and vexed times to invoke the eminent Nobel Laureate Amartya Sen, who had empirically demonstrated that ''No famine has ever taken place in the history of the world in a functioning democracy,''. Sen explained that democratic governments ''have to win elections and face public criticism, and have strong incentive to undertake measures to avert famines and other catastrophes. There has not been a large-scale loss of life since 1947.''

Higher judiciary in India is at the crossroads of our constitutional history. There are two paths before it. To sustain a constitution responsive to the liberties granted by the founders or endorse an untenable interpretation of the constitution indifferent to human liberties. To quote Justice Deepak Gupta again, "The superior courts as protectors of the rights of the people have a duty to ensure that the powers that be do not suppress dissent because that will have, to use the words of brother Justice Nariman a 'chilling effect' on the freedom of speech"