How Amy Coney Barrett's Confirmation Could Influence The US Supreme Court? 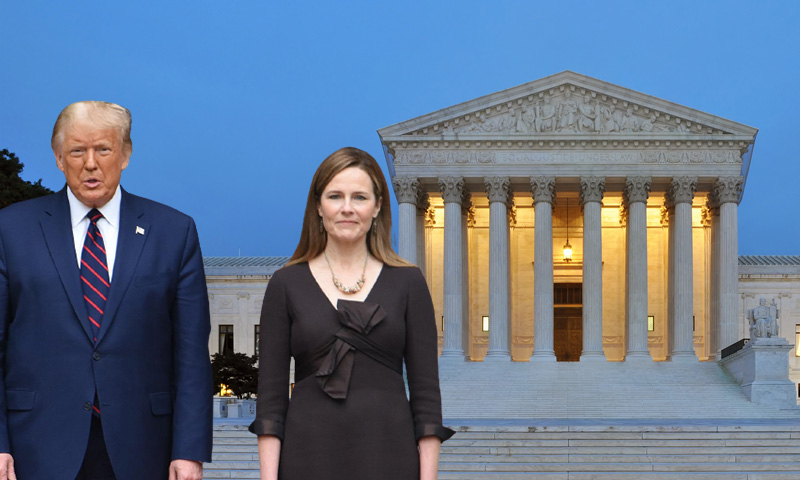 Following the death of United States Supreme Court Justice Ruth Bader Ginsburg, who passed away on Friday, 18th September 2020, President Donald J. Trump has nominated 48-year-old Judge Amy Coney Barrett to replace her at the top court. This is President Trump's third nominee to the United States Supreme Court; the first two being Justice Neil Gorsuch, who replaced Late Justice Antonin Scalia, and Justice Brett Kavanaugh, who replaced Justice Anthony Kennedy upon his retirement. If confirmed, Amy Coney Barrett shall be the 5th woman appointed to the apex court. At 48, Barrett would be the youngest justice appointed to the Supreme Court, allowing her to potentially shape American law and society for generations.

On Sunday, 27th September, Sen. Lindsey Graham, who leads the Senate Judiciary Committee – the panel tasked with vetting judicial nominees – said that the confirmation hearings will begin Oct. 12 and that the committee should clear Barrett's nomination by Oct. 26. That would leave the full Republican-led Senate with roughly a week to confirm Barrett in the final days of the presidential campaign.

Who is Amy Coney Barrett?

After law school, Barrett spent two years as a judicial law clerk, first for Judge Laurence Silberman of the U.S. Court of Appeals for the D.C. Circuit from 1997 to 1998, then for Justice Antonin Scalia of the U.S. Supreme Court from 1998 to 1999, whom she considers her mentor. From 1999 to 2002, she practiced law at Miller, Cassidy, Larroca & Lewin in Washington, D.C. President Donald Trump nominated Barrett to the Seventh Circuit Court of Appeals on May 8, 2017, and the Senate confirmed her on October 31, 2017. While serving on the federal bench, she was a professor of law at Notre Dame Law School, where she has taught civil procedure, constitutional law, and statutory interpretation.

In February 2016, the passing of Justice Antonin Scalia left an opening on the Supreme Court in an election year. The then President, Barack Obama, nominated Judge Merrick Garland to fill up the vacancy on the court. In what came as a surprise to many, Senate Republicans, led by Senate Majority Leader Mitch McConnell refused to grant Merrick Garland a hearing, let alone confirm his nomination. They believed that a Supreme Court vacancy should not be filled so close to an election and that the people should have a say in this decision when they vote in November 2016. They explained their decision by stating that it was consistent with history. The Senate Republican majority refused to budge and the nomination eventually lapsed. That vacancy was later filled when Donald Trump nominated Neil Gorsuch to the top court. Gorsuch was confirmed by the Senate by a 54-45 vote in April 2017.

In fact, after blocking Merrick Garland's appointment, several key Republican figures said that they would act similarly if an opening was to open up in the final year of Donald Trump's presidency, and would wait until after the election to fill the vacancy. One of these Republican leaders was Sen. Lindsey Graham, who famously said, "I want you to use my words against me. If there's a Republican president in 2016 and a vacancy occurs in the last year of the first term, you can say Lindsey Graham said, 'Let's let the next president, whomever it might be, make that nomination,' and you could use my words against me and you'd be absolutely right."

Fast forward to September 2020, the passing of Ruth Bader Ginsburg has opened up a vacancy on the top court just 6 weeks before the Presidential Election in November. However, unlike 2016, the Republican leadership quickly announced that Trump's nominee for Ginsburg's seat shall get a vote on the Senate floor. This has caused a storm across America as most Democrats, Independents, and some Republicans too, see this as a hijack of the top court. Most Republican leaders have tried to avoid questions regarding this change in position. Reportedly, one of Ruth Bader Ginsburg's final wishes was that her seat is filled in the next presidential term and not before the 2020 election. She told her granddaughter, "My most fervent wish is that I will not be replaced until a new president is installed". With a Republican majority in the U.S. Senate, Barrett's appointment to the top court seems imminent.

Why are the Republicans rushing?

Many polls suggest that the Republicans may lose their majority in the US Senate this November. Democratic presidential nominee Joe Biden has been leading in the polls and poses a serious risk to Donald Trump's potential second term. With that in the background, Ruth Bader Ginsburg's death has given the Republicans a once in a generation opportunity to shift the make-up of the Supreme Court to a 6-3 conservative majority. Republicans fear that if they fail to fill Ginsburg's seat and lose the 2020 election and control over the Senate, they may have to wait for decades for such an opportunity again. With 6 Republican appointees, the court would have a majority of 5 conservative judges even without Chief Justice John Roberts, who has been the court's leading swing vote ever since Justice Anthony Kennedy retired.

How will her appointment affect the US Supreme Court's view in the years to come?

Amy Coney Barrett is a constitutional scholar with expertise in statutory interpretation. She considers herself an originalist. She clerked for Justice Antonin Scalia, who too was an originalist. She is also deeply religious and it is widely believed that her Catholic faith shall heavily guide her judgment on the bench. With Barrett on the US Supreme Court, the Republicans shall finally be able to get favorable rulings relating to Gun Rights, LGBTQ Rights, Partisan Gerrymandering, Obamacare, Voting Rights. This also poses a risk to numerous other rights which are not expressly stated in the US Constitution but have been a product of judicial interpretation.

A 6-3 conservative majority on the bench may finally help in the overturning of Roe v. Wade, which a landmark decision of the U.S. Supreme Court in which the Court ruled that the Constitution of the United States protects a pregnant woman's liberty to choose to have an abortion without excessive government restriction. While Barrett believes in the doctrine of stare decisis, she does not believe that Roe v. Wade is a "super precedent" -a case the court would never consider overturning (like Brown v. Board of Education). She argues that for a case to be a super precedent, it must have widespread support from not only jurists but politicians and the public at large to the extent of becoming immune to reversal or challenge. According to her, Roe v. Wade has not achieved this status yet. She has also publicly called abortion 'always immoral'. Barrett's religious beliefs also came under fire during her confirmation to the Seventh Circuit, with Senate Judiciary Committee minority leader Dianne Feinstein grilling her on her faith. 'The dogma lives loudly within you, and that is a concern,' Feinstein said while questioning Barrett on her views about abortion rights.

If confirmed, another important subject that shall come up before Barrett at the Supreme Court will be a challenge aimed at taking down the Affordable Care Act (Obamacare). She has been quite vocal about her disapproval of the court's effort to keep the legislation floating by a convenient interpretation of the statute. She heavily criticized Chief Justice John Roberts's opinion in the 5–4 decision that upheld the constitutionality of the central provision in the Affordable Care Act (Obamacare) in a 2012 landmark judgment. She also believes that Obamacare's birth-control mandate violates religious liberties.

According to most jurists, her appointment may put decades of gun safety progress at risk. After years of losing at the ballot box as well as in courts, the NRA has come to see the United States Supreme Court as the final venue where they stand a chance to make a dent; with Barrett on the bench, this may finally be a reality. In a dissenting opinion last year, she disagreed with two of her fellow judges and adopted an unusual approach to the Second Amendment which no court had accepted yet, and adopted a gun-lobby backed interpretation of a 14th-century firearms law. Her dissent has won her support from both the NRA, as well as Republicans across the nation.

Another huge issue that may come up before the Supreme Court may be to decide the November elections. Many suspect that things might play out between Trump and Biden as it did with George W. Bush and Al Gore in 2000. While it is unclear about what the issue at hand may be and how the judges shall rule upon it, many believe that a 6-3 conservative majority on the court would certainly help Donald Trump. While Barrett is likely to join the reliable conservative majority on several election-related issues like redistricting and voter identification laws, it seems unlikely that she will be appointed to the court in time to rule on the numerous emergency petition that shall come before the court in light of the November elections being held amid the Covid-19 crisis.

When it comes to immigration, Barrett's record is mixed – she has voted both in favor of the administration, as well as immigrants. As an appellate court judge, she helped to advance one of Trump's key immigration policies – imposing a wealth tax on the numerous immigrants who wish to come to the United States annually. In a 40-page dissent, she laid out why the United States could block people who might become dependent on public assistance, even if they have never used public assistance before. She has also consistently ruled against immigrants applying for humanitarian protections and other immigration benefits, thereby setting dangerous precedents for lower courts to follow. On the other hand, she prevented the administration from scrapping a policy that allows immigration judges to indefinitely close deportation cases in which the immigrant doesn't appear to be a priority for enforcement, thereby giving them a chance to live in the United States without fear of deportation hanging over their heads.

In other areas like criminal justice, her record isn't very clear. One would have to wait for cases to come before her to see how she rules on such matters. However, history shows that cases involving criminal justice and police abuse tend to divide conservative judges, causing some to reach out and side with the court's liberal minority. This often leads to majority opinions with unexpected vote make-ups. Other areas where her position on the law remains to be seen is environmental matters, climate change, and administrative law.

Her nomination has left not only the American public but also the global legal community in splits. Most agree that if appointed, she will have a decades-long career on the court and shall heavily influence the court's view on some of the most fundamental issues that American society faces today. The law laid down by the US Supreme Court influences courts around the world and therefore her nomination comes as a historic moment that shall influence the course of history. In the weeks to come, America shall witness a fiercely fought political war both at the ballot box, as well as in the senate where Amy Coney Barrett's nomination shall receive a vote.

[Hamza Lakdawala is an aspiring litigator, researcher, and writer from Mumbai. He studied Journalism at Mumbai University and is currently pursuing his LL.B. at Kishinchand Chellaram Law College, Mumbai. You can follow him on Twitter @hamzamlakdawala]