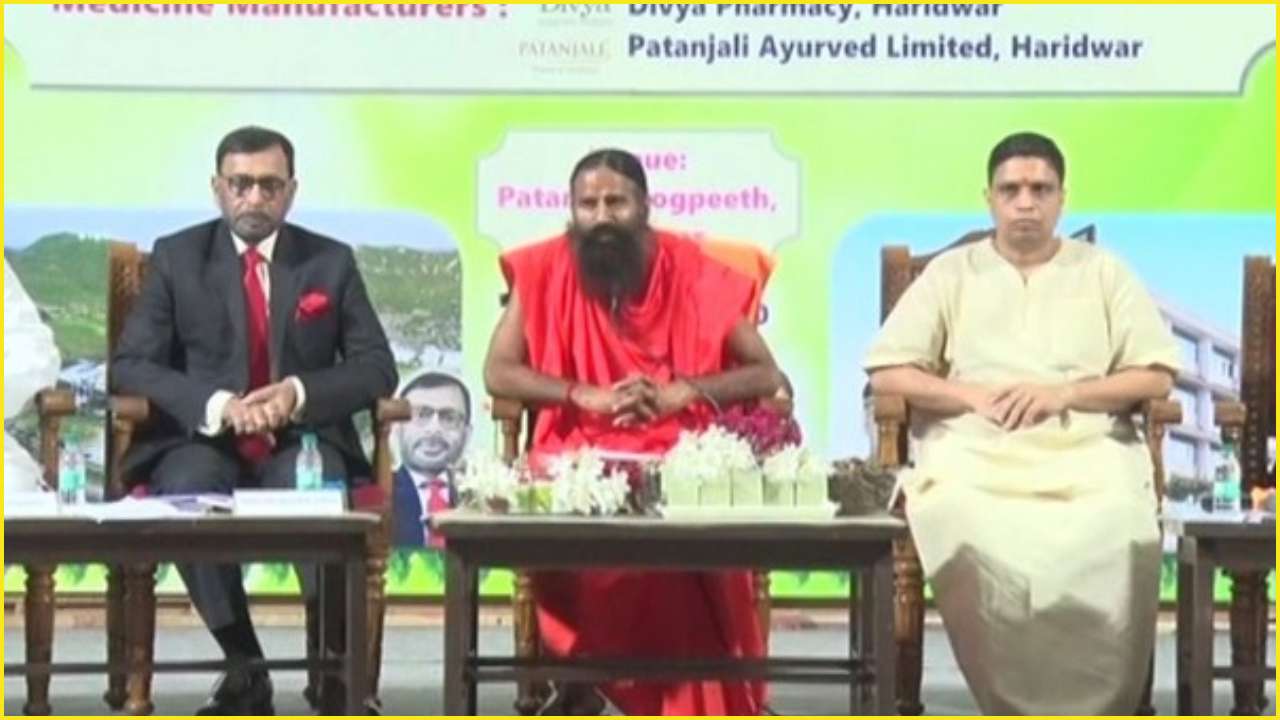 x
There is an absolute ban on advertising Ayurvedic drugs for therapeutic purposes.

Patanjali Ayurved made a sensational claim on Tuesday about developing an Ayurvedic cure for COVID-19 pandemic. Patanjali's founder Ramdev and Managing Director Balkrishnan announced to the media that they have developed 100% cure for the COVID-19 through "Coronil and Swasari" medicines. The statement issued by Patanjali claimed that symptomatic COVID-19 patients became asymptomatic within 3...

Patanjali Ayurved made a sensational claim on Tuesday about developing an Ayurvedic cure for COVID-19 pandemic.

Patanjali's founder Ramdev and Managing Director Balkrishnan announced to the media that they have developed 100% cure for the COVID-19 through "Coronil and Swasari" medicines. The statement issued by Patanjali claimed that symptomatic COVID-19 patients became asymptomatic within 3 to 15 days of drug administration. It added that 'clinical case study' of the drugs was done in several cities such as Delhi, Meerut and Ahmedabad.

These medicines come in a Corona kit priced at Rs 545, which was to be sold across India within a week.

The Ministry of AYUSH responded swiftly to the development, asking Patanjali to refrain from publicizing the medicines until proper verification.

Patanjali's publicity of the COVID-19 cure is fraught with several legal issues, which will be discussed below.

On April 21, the Ministry of AYUSH, while giving nod for research for COVID-19 treatment using traditional medicine systems, had imposed several conditions.  As per these conditions, it is mandatory for the institution to "apprise the Ministry of Ayush, Govt of India about the research developments".

Going by the response of the AYUSH Ministry on Tuesday, it is clear that the Ministry was kept in the dark about the whole process adopted by Patanjali.

"Facts of the claim and details of the stated scientific study are not known to the Ministry", it said yesterday. Therefore, the unilateral declaration without prior consultation with the Ministry violates the April 21 directive.

On March 24, the Union Home Ministry, invoking powers under the National Disaster Management Act, had declared that making of false claims with respect to COVID will be a punishable offence.

Following this, the AYUSH Ministry issued a directive on April 1, invoking powers under the under Section 33 P of the Drugs and Cosmetics Act, 1940, to stop and prevent publicity and advertisement of AYUSH-related claims for COVID-19 treatment in print, TV and electronic media and directed the State/UT authorities to take necessary action against the persons/agencies involved in contravening the relevant legal provisions and the aforesaid guidelines of NDMA.

Publication of unilateral claims about discovery of COVID-19 cure, before due verification and approval by statutory authorities, would fall within the ambit of 'false claims'.

Violation of Drugs and Cosmetics Act and Rules

It is not yet clear under what terms the Drug Licensing Authority of Uttarakhand issued license to Patanjali for the manufacture of the drug.

The Ayush Ministry has requested concerned State Licensing Authority to provide copies of license and product approval details of the Ayurvedic medicines being claimed for the treatment of COVID - 19.

Some reports are emerging at moment that the license application did not mention that the medicine was for curing COVID-19 and that the license was confined only for developing immunity booster with respect to COVID-19.

"Divya Pharmacy did not apply for license of any kind of medicine related to Corona nor were they given any license in this regard. The license was issued only for immunity booster kits and fever medicine. But now that it has come to the attention of the AYUSH department, a notice will be issued to Divya Pharmacy. It their reply is not satisfactory then their current licenses will be canceled"

If this is the case, it will attract the offence of 'misbranding of drugs' under Section 33E read with 33I of the Drugs and Cosmetics Act, 1940.

In 2018, the Central Government amended the Drugs and Cosmetic Rules to specifically prohibit the advertisement of any AYUSH drugs for the use of "diagnosis, cure, mitigation, treatment or prevention of any disease, disorder, syndrome or condition". This means that AYUSH drugs cannot be advertised for therapeutic purposes.

"The manufacturer or his agent, of Ayurvedic, Siddha or Unani drugs, shall not participate in the publication of any advertisement relating to any drug for the use of diagnosis, cure, mitigation, treatment or prevention of any disease, disorder, syndrome or condition".

The Rules permitted advertisement of AYUSH drugs for non-therapeutic purposes, after obtaining prior permission.

Evidently, Patanjali's announcements violate this strict embargo on the advertisement of Ayurveda drugs for therapeutic purposes.

The undisputed fact here is that the claims of Patanjali are yet to be verified by the AYUSH Ministry, which is the central regulatory authority with respect to Ayurvedic drugs.

Therefore, the widespread publicity of unverified claims attracts the penal provisions of the Drugs and Magic Remedies (Objectionable Advertisements Act), 1954, which was enacted to protect gullible people from falling prey to dubious claims of cure.

Section 4 of the Act will be relevant in the present circumstances, which deals with punishment of misleading advertisements relating to drugs.

As per this, no person shall take any part in the publication of any advertisements relating to a drug if the advertisement contains any matters which :

The violation of the Act can lead to punishment of imprisonment up to 6 months on first instance and imprisonment up to one year for subsequent offences. The offences under the Act are cognizable,meaning the police can directly lodge FIR with respect to it.

So, Patanjali has already committed several legal violations by publicizing the drug without due verification.

It remains to be seen if the Ministry will maintain the initial resolve shown by it to ensure that these violations meet the appropriate legal conclusions.