In Indian Lynchings, Law Is An Accomplice 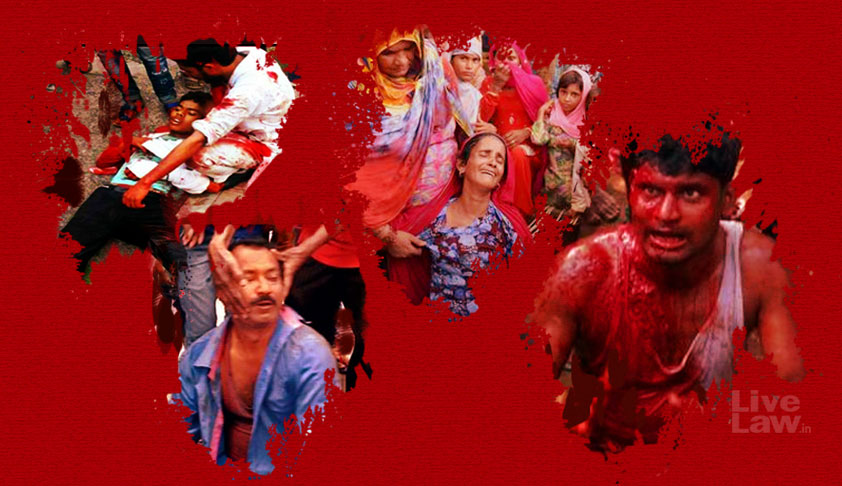 "And then they had me, stripped me, battering my teeth into my throat till I swallowed my own blood. My voice was drowned in the roar of their voices, and my black wet body slipped and rolled in their hands as they bound me to the sapling."- Afro-American poet Richard Wright,in his poem Between the World and Me, thus portrayed the macabre of the lynchings that took place...

"And then they had me, stripped me, battering my teeth

into my throat till I swallowed my own blood.

My voice was drowned in the roar of their voices, and my

black wet body slipped and rolled in their hands as

they bound me to the sapling."-

Afro-American poet Richard Wright,in his poem Between the World and Me, thus portrayed the macabre of the lynchings that took place in America against the coloured people in late 1800s and early 1900s. The Emancipation Proclamation of 1863 set the black slaves of America free. But the white supremacists persistently committed lynchings against the Afro-American people to perpetuate the subjugation of the people of colour. The covert provocation for these lynchings were the violation of 'Jim Crow' laws and etiquette enacted for legalising racial discrimination; even though often overtly rape or murder was cited.

According to Tuskegee Institute, Alabama, around 3,446 black people were turned victims of lynching during 1882-1968 period. Likewise after the ascendancy of the majoritarian ideology, there has been spiraling of lynchings in India. The American lynchings and the recent lynching spree in India are astonishingly similar in motive and method. In India the victims are mainly Muslims and Dalits. Cow-poaching and cow-slaughter are often cited as the provocation. But the ulterior motive behind these gruesome homicides is the perpetuation of social asymmetry and the subjugation of subaltern classes.

The latest victim of mob lynching in India is Mr Tabriz Ansari of Jharkhand. He was brutally tortured and murdered and forced by the ruthless mob to chant "Jai Sriram'' and "Jai Hanuman''. The horrible aspect of lynching in India is the overt support extended to the mob by the political establishment and some sections of society.

India is lacking proper legislation and effective enforcement apparatus to combat this socio-political menace. Presently the only legal remedy available for lunching is invoking IPC 302 and 304. Lynching is graver than culpable homicide and murder as it causes tremendous repercussions on our social fabric. It is an offence against public tranquility and order. Another Section often invoked is IPC 153 A (Promoting enmity between different groups on grounds of religion, race, place of birth, residence, language, etc., and doing acts prejudicial to maintenance of harmony). But it too much lenient to perpetrators as the maximum punishment stipulated is only an imprisonment for three years. Furthermore invoking IPC 153A require prior permission from the state government.

In July 17, 2018, the Supreme Court of India, in Tehseen S. Poonawalla Vs.Union of India and others, issued comprehensive directions to Union and state governments regarding prevention of mob lunching in India. In this case the Supreme Court observed: "Lynching is an affront to the rule of law and to the exalted values of the Constitution itself. We may say without any fear of contradiction that lynching by unruly mobs and barbaric violence arising out of incitement and instigation cannot be allowed to become the order of the day. Such vigilantism, be it for whatever purpose or borne out of whatever cause, has the effect of undermining the legal and formal institutions of the State and altering the constitutional order…

"…These extrajudicial attempts under the guise of protection of the law have to be nipped in the bud; lest it would lead to rise of anarchy and lawlessness which would plague and corrode the nation like an epidemic. The tumultuous dark clouds of vigilantism have the effect of shrouding the glorious ways of democracy and justice leading to tragic breakdown of the law and transgressing all forms of civility and humanity. Unless these incidents are controlled, the day is not far when such monstrosity in the name of self-professed morality is likely to assume the shape of a huge cataclysm. It is in direct violation of the quintessential spirit of the rule of law and of the exalted faiths of tolerance and humanity…

''…Hate crimes as a product of intolerance, ideological dominance and prejudice ought not to be tolerated; lest it results in a reign of terror. Extra judicial elements and non-State actors cannot be allowed to take the place of law or the law enforcing agency''.

The Supreme Court directed the Union Government to legislate on the matter making lynching a distinct crime and stipulating exemplary punishment for the crime. As a preventive measure the Court directed all state governments to designate a police officer not below the rank of Superintend of Police, as nodal officer in each district to prevent the occurrence of mob lynching. The state governments were urged to set up the special task force for gathering intelligence regarding the spreading of fake news and inflammatory contents online that may instigate mob lynching.

The State Governments were directed to identify areas where instances of lynching and mob violence have been reported in the last five years. The Nodal Officer should hold regular meetings with the local intelligence units in the district along with all Station House Officers of the district so as to identify the existence of the tendencies of vigilantism, mob violence or lynching in the district. The government should sensitize people about the dire consequences of mob lynching through radio and television broadcasts.

As a remedial measure, it was directed that FIR should be lodged immediately in case of occurrence of mob lynching. Investigation in such offences should be personally monitored by the Nodal Officer who shall be duty bound to ensure that the investigation is carried out effectively. The State Governments should set up a lynching/mob violence victim compensation scheme in the light of the provisions of Section 357 A of Cr.PC within one month from the date of this judgment.The cases of lynching and mob violence should be specifically tried by designated court/Fast Track Courts. The failure by Police Officers to comply with the aforementioned directions should be treated as deliberate negligence and/or misconduct and acted against accordingly.

But unfortunately the Union Government has not taken any steps to legislate on this burning problem as directed by the Supreme Court. However Manipur has passed a special legislation titled The Manipur Protection from Mob Violence Act 2018. This is a silver lining in the cloud. The Act has been framed on the lines of the Supreme Court directions. The mob violence has been given a broad definition bringing the violence sparked by dietary practices and sexual orientation under its purview. The Act stipulates criminal liability to the Police officers who fail to prevent the occurrence of mob violence. The Union Government should take immediate steps to legislate on the matter in the light of the Supreme Court directions and in tune with The Manipur Protection from Mob Violence Act 2018.

"Christ is a Nigger,

O, bare your back…

Of the bleeding mouth:

On the cross of the South.''

Christ was mob-lynched for his different views as the blacks in America were lynched for their skin colour and Muslims and Dalits in India are being lynched for their different religion and caste. As Pontius Pilate, Law cannot say "I am innocent of this man's blood'' as long as it shuns its duty to protect these hapless victims of mob lynching.