India's Manual Scavengers Have Been Forgotten In The Covid 19 Narrative 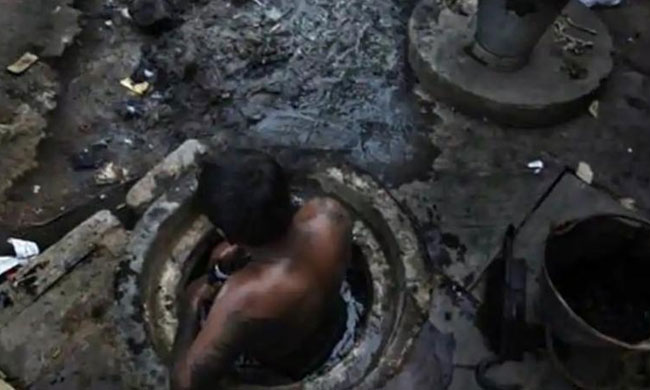 In India's fight against COVID 19, analysts and healthcare workers have identified groups who might be vulnerable to the infectious disease. The broad categories which have been identified include, people in old age, economically weak individuals, new born children, and those suffering from terminal illnesses. One such group which falls in the economically weak category and is...

In India's fight against COVID 19, analysts and healthcare workers have identified groups who might be vulnerable to the infectious disease. The broad categories which have been identified include, people in old age, economically weak individuals, new born children, and those suffering from terminal illnesses. One such group which falls in the economically weak category and is most vulnerable to COVID 19 are manual scavengers. They work in hazardous environments which involve cleaning of human and animal waste and are always at risk due to the lack of safety and cleaning equipment.

More importantly, the practice of Manual Scavenging has been banned in India by promulgation and enactment of the Employment of Manual Scavengers and Construction of Dry Latrines (Prohibition) Act, 1993 and 2013. Despite such a ban, the occupation is widely practiced throughout India with various State Governments turning a blind eye.

A victim of caste oppression, manual scavengers are the worst hit and the least protected in the pandemic. They are in the occupation not by choice, but by compulsions. In addition, the health hazards they face, are an inadvertent curse of the occupation. Keeping this in mind, on April 09, 2020, a petition was filed in the Supreme Court, seeking protection of rights of sanitation workers – citing lack of personal protection equipment for them during the COVID 19 pandemic. The Petition has brought to light how manual scavengers are highly vulnerable during the pandemic. This is yet again one of the many incidents which highlights the blatant ignorance of the State in safeguarding the rights of manual scavengers.

A CASE OF COMPULSION

Manual scavenging is an outcome of compulsion. These include social pressures and economic necessity. In 2010, a report by Wateraid highlighted how societal pressures play a major part in compelling individuals in the occupation of manual scavenging. The report brought out how an ideology had been engrained in manual scavengers that their occupation will be secure for them and there isn't any other choice of work available to them.

While societal pressure is a concern, economic necessity compels the manual scavengers to work everyday despite the unavailability of any safety equipment or gear. With the outbreak of coronavirus, and an anticipated increase in unemployment, the situation will be grimmer. Lack of jobs will drive back those who were trying to escape the occupation. Recent reports highlight how manual scavengers are forced to work during the national lockdown due to economic necessity.

THE OCCUPATION MAKES THEM HIGHLY VULNERABLE

Manual scavengers are vulnerable on both; health and economic fronts. According to a survey conducted by the National Commission for Safai Karmacharis (NCSK) in 2018, an average of one person died every five days while cleaning sewers and septic tanks across the country. Data collected by the Social Justice and Empowerment Ministry reflects that the number of people who died while cleaning sewers and septic tanks have increased from a total of 57 in 2015 to 110 in the year 2019, the growth in these deaths saw a 61% increase from the year 2018-2019.

The Supreme Court ruling in the case of Delhi Jal Board had directed the authorities to provide modern protective equipment to all the sewer workers. However, the Manual Scavengers still continue to be exposed to various health hazards including exposure to toxic gases, human waste and medical waste. The occupation becomes a ticking time bomb from a healthcare perspective during the pandemic. This is because they still work with negligible protective gear and are highly prone to catch coronavirus from the surrounding environment.

On an economic front, the pay is extremely low. Reports suggest that income received from the occupation barely ensures survival. In most of the cases, manual scavengers are not able to afford the food to meet their nutritional requirement. Most of them are stuck because of debt bondage. This creates a major issue in times of pandemic. With next to no savings, manual scavengers will not be able to feed themselves and their families if they are unable to work. The situation becomes worse when governments exclude them from financial relief. For example, in the case of Delhi, financial relief has been directed only towards registered construction workers – thereby excluding manual scavengers.

In addition to the already existing vulnerabilities, there seems to be an implementation failure of the law. The Act prohibiting the practice of manual scavenging was implemented to protect vulnerable groups from entering the occupation. The Act provided for a rehabilitation program for those who were involved in manual scavenging. Despite the stringent measures taken by the Supreme Court in 1993 and the enactment of the 1993 and 2013 Acts, the relevant objectives could not be fulfilled. Lack of support from states and its public officials to the Parliament has proven to be the primary reason why these acts did not succeed in fulfilling its objective. A total of around 48,000 manual scavengers have been identified though a national survey till January 31,2020. A total of around 30,000 people were identified in Uttar Pradesh in 2018, making it the State with highest number of Manual Scavengers. These still remain the official numbers, discounting a lot others who are unreported.

LACK OF RECOGNITION BY THE STATE

As per Section 5 of the 2013 Act, the engagement or employment of any person as a manual scavenger is prohibited and any person so engaged or employed with the obligation to do manual scavenging has to be discharged immediately, thus, deeming any such employment to be illegal. What flows from this – a natural exclusion of manual scavengers from the scope of the term "contract labour" and "employee" under Section 2(g) and (k) of The Code on Wages, 2019 respectively, and hence disallowing them from any legal entitlement under the Code of Wages.

In the times of COVID 19, there is a constant tussle between the Employers' against the order by the Government of India to comply with obligations to pay wages; wherein the former has considered the obligation to be merely moral in nature and not as a Statutory mandate. While the debate around this is still ongoing, more than thousands of manual scavengers who lack legal recognition under the Code, do not fall into the eligibility criteria and are conveniently excluded from receiving their basic wages which is their only means to survival in times of the pandemic.

The inaction by the State is a blatant violation of Article 21 of Indian Constitution. The State has time and again failed to guarantee the right to live with dignity and right to health as fundamental right to manual scavengers. More recently, there has been a movement by academics across India to treat sanitation workers at par with healthcare workers. While a discourse is taking shape in civil society to provide additional rights, there is a need for the policy makers to play an active role and create additional safeguards specifically during the duration of the pandemic. This can be done by providing protective equipment which is, social security and legal entitlements which have been provided to healthcare workers.

(Authors are working as Law Researchers in the Delhi High Court)