The Legality of Intelligence & Investigative Agencies of India 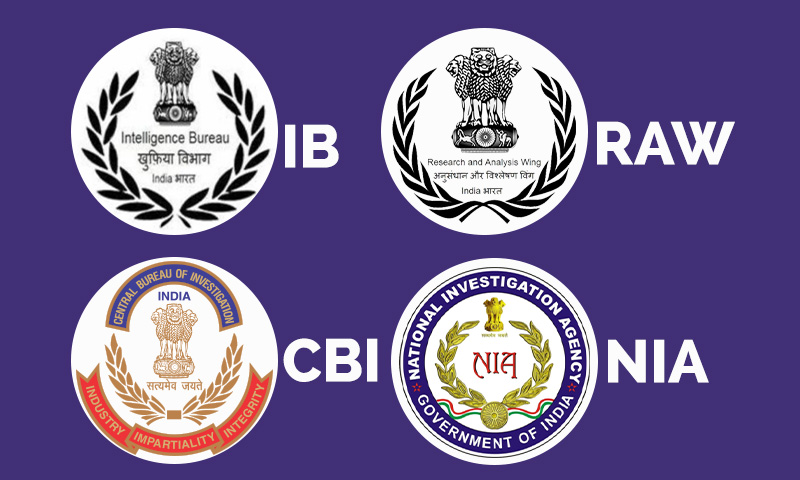 In the month of June this year, several reports of unauthorized surveillance of numerous Indian journalists by means of spyware named "Pegasus" surfaced. The spyware is sold by the NSO Group, which has claimed that it provides service only to "vetted governments." As the hearing of the matter at hand is to resume soon in the Supreme Court, one of the most pertinent issues which need to...

In the month of June this year, several reports of unauthorized surveillance of numerous Indian journalists by means of spyware named "Pegasus" surfaced. The spyware is sold by the NSO Group, which has claimed that it provides service only to "vetted governments." As the hearing of the matter at hand is to resume soon in the Supreme Court, one of the most pertinent issues which need to be looked at is the legality of the intelligence and investigative agencies of the country.

At present, there are around fifteen intelligence agencies in the country. Most of them, including IB (Intelligence Bureau) and R&AW (Research & Analysis Wing), are established by executive orders. It is true that secrecy has been of paramount importance as far as the security of the country is concerned. However, the evidence does not point to secrecy beyond the operational needs of the agencies being very successful in various instances.[1]

The legitimacy of these agencies has often been questioned. In response to the questions on the legal status of IB and R&AW posed by former Union Minister Manish Tewari in 2009, the then Home Minister said that IB has its origin in Entry 8 of the Union List and also admitted that no statute specifically lays out the framework for the functioning of R&AW. However, a mention of a subject in the Union List by itself cannot grant legitimacy to an institution; it merely gives the Central Government the power to enact legislation on the mentioned subject. At most, it confers on IB the status of ad hoc arrangement for administration by the Executive.

R&AW was formed in 1968 to majorly focus on India's relations with China and Pakistan. However, its scope of influence has expanded over the years. Even though R&AW is given credit for several policy successes, including the formation of Bangladesh, questions on its efficiency were raised after the intrusion of Pakistani forces in Jammu & Kashmir during 1999. The Kargil Review Committee Report pointed out that lack of proper communication is a serious weakness in this organization and recommended a "formal written charter" to mitigate the same.

Challenges posed to the legality of Indian Intelligence Agencies

The constitutionality of IB was challenged by a PIL filed by RN Kulkarni back in 2012. It highlighted the fact that IB had functioned for more than a century after its inception in 1887 (then known as the "Central Special Branch") without the backing of any regulatory framework. The Central Government said that IB is a civilian organization by nature and, consequently, does not have police powers. As a result of the PIL, the court had directed the Central Government to come up with an executive order clearly specifying powers and functions of IB. However, to this date, such an executive order has not come into force.

The legality of CBI was challenged in the case of Navendra Kumar v. The Union of India & Ors. in 2013. The CBI came into existence by a government resolution passed in 1963, but it derives its independent status from the Delhi Special Police Establishments Act, 1946. Interestingly, the CBI was never formally reconstituted. In the case of Vineet Narain v. Union of India, the Supreme Court clarified that the CBI is required to take the consent of the State Government to carry on with its investigation because "police" is a State subject, mentioned as Entry 2 of List II of the Seventh Schedule of the Constitution. However, to consider CBI as "police," with powers to register an FIR, carry out investigations, search and seizure, and file a charge-sheet is questionable in itself. The consent of State is not a pre-requisite in cases where the CBI has to exercise its jurisdiction in pursuance of a Court Order, as held in the cases of E.G. Barsay v. State of Bombay and Kanayalal v. State of Gujarat. It can be said that the CBI can exercise its powers of investigation in three scenarios. Firstly, when the subject matter of investigation is related to the Central Government. Secondly, the State Government requests the CBI to look into a matter. Thirdly, the Supreme Court or a High Court directs the CBI to conduct an investigation, provided the matter does not fall within the purview of the Central Government. The Gauhati High Court in the case of Navendra Kumar v. The Union of India & Ors. held that the executive order that established the CBI is ultra vires to the Constitution. Currently, this judgment has been stayed by the Supreme Court. The CBI had proposed a draft of the CBI Act back in 2010 and sought to give power to the CBI to investigate matters related to the Union List as well as the Concurrent List; however, it has not been approved by the Parliament as of yet.

The BN Srikrishna Committee was set up in August of 2017 to examine issues related to Data Protection. The draft report calls for "parliamentary oversight" and "pre-approval by the judiciary" in cases where the intelligence agencies seek to access personal data or metadata without the consent of the person whose data is sought to be accessed, known as the data principal. It further states that personal data may be processed only for purposes that are "clear, specific, and lawful." The report puts forward Justice K.S. Puttuswamy (Retd.) v. Union of India's three-fold requirement to be fulfilled when the intelligence agencies need to "encroach in privacy" of individuals. Firstly, there must be a law that justifies such an encroachment. Secondly, the encroachment must be for a legitimate purpose. Thirdly, the encroachment must be proportional to the purpose. Since most of the intelligence agencies are constituted by executive orders, the Government would have to bring in legislation formalizing the functioning of such agencies as currently, in order to comply with the proportionality test given in the Puttuswamy judgement.

Need for a Legislative Framework

The functioning of intelligence agencies has been subjected to many controversies in the recent past; most of them are related to the legal validity and the mode of operation of these institutions. For example, the unbridled powers of the Intelligence Bureau in matters such as domestic wiretapping of phones and keeping a close check on other forms of communication, that too without any regulatory framework is concerning. It has also been alleged that powers of the Intelligence Bureau have been routinely misused by the ruling parties to snoop on activities of the opposition. It can also help reduce the excessive influence of the Government on certain intelligence agencies. A legal framework is required to avoid any confusion about the nature of work an intelligence agency is supposed to perform and reduce the possibility of a conflict between the powers of intelligence agencies and the Right to Privacy of Individuals. Statutory backing can prove to be effective in curbing some of the most pertinent problems which have long plagued intelligence agencies, such as misuse of allotted funds, the increasing politicization of functioning, and of course, unreasonable and illegal exercise of powers in certain cases. A comprehensive legislative framework governing intelligence agencies to eradicate the lacunae in the present system and enhance coordination is the need of the hour.

She has been doing an internship in LiveLaw