Will The Ukraine Civilian Combatants Be Protected Under International Law? 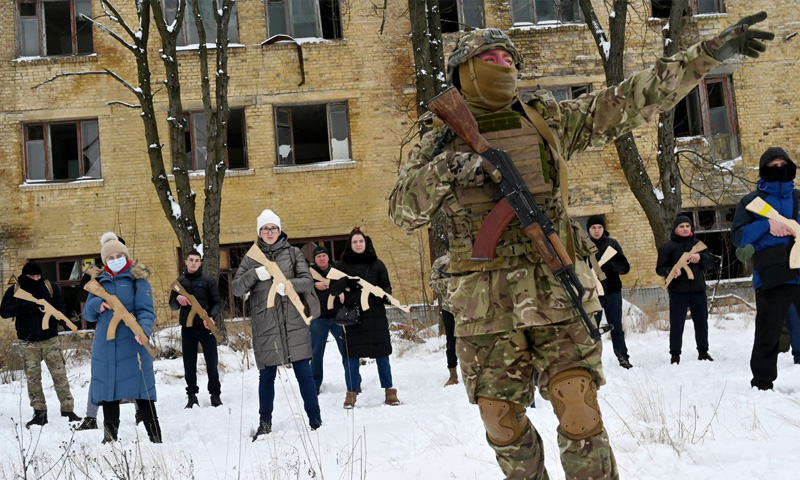 The international law of armed conflict has always distinguished between civilians and the military. Two days after Putin announced his "special military operations", media reports show that several Ukrainian citizens are taking uparms to defend their home. Once the situation escalated and Russians forces were closing in on Kyiv, the Ukrainian Government called out tocivilians to...

The international law of armed conflict has always distinguished between civilians and the military. Two days after Putin announced his "special military operations", media reports show that several Ukrainian citizens are taking uparms to defend their home. Once the situation escalated and Russians forces were closing in on Kyiv, the Ukrainian Government called out tocivilians to defend Ukraine. It has been reported that 18000 rifles had been distributed to the civilian volunteers by 25 February 2022.

Soon after, Ukraine's defence ministry urged citizens to make Molotov cocktails, and the National Guard of Ukraine tweeted an infographic on how to make the weapon.

Ukraine brought its case before the International Court of Justice under the Genocide Convention of 1948 and has requested an injunction, allowing Ukraine to have a prompt hearing. Now that the ICJ, is soon going to hear Ukraine's arguments against Putin's invasion, what will be the position of these Ukrainian citizens who have taken up arms against the onslaught of Russian Army?

Before the big legal fight in the ICJ, one should know of the protections that Geneva Convention III offers for combatants and civilians. Article 4A of the Convention has several categories of persons who take part in hostilities. If ever caught by the enemy forces, combatants are then protected as 'prisoners of war'. If a mercenary is ever caught by the 'other side', they may be granted 'prisoner of war' status, but it depends on the State.

Article 4A(1) – grants combatant status to members of the armed forces, etc and even members of State law enforcement who have been formally incorporated into the armed forces of their State. Article 4A (2) distinguishes between informal volunteer groups who are then not entitled to either 'combatant' status nor 'prisoner of war' privileges. Under Article 4A(2), combatants should wear a distinct sign and should openly carry arms.

'Lawful combatants' enjoy 'combatant immunity', which is the right to participate in hostilities and to enjoy immunity from their warlike acts, which also means they can be lawfully targeted by the enemy at any time.

Levée en masse is a French term used for a policy of mass national conscription, often in the face of invasion. And under Article 4A(6), civilians who take part in a levée en masse have a combatant status. While combatants under this category do not need a command structure, they still need to openly carry arms and abide by all laws of armed conflict.

Civilians on the other hand, are defined in Additional protocol I, as all persons who are notcombatants. Civilians enjoy all kinds of immunity and attacking them is a war crime. As stated by Dustin Lewis of Harvard Law School, "a war crime is any conduct – whether an act or an omission – that fulfils two cumulative criteria, first, the conduct must be committed with a sufficient connection to an armed conflict. Second, the conduct must constitute a serious violation of the laws and customs of international humanitarian law that has been criminalized by international treaty or customary law".

While 'direct participation in hostilities' of civilians is a debated topic, but it is generally accepted that a civilian loses their immunity once they directly participate in hostilities. Therefore, all persons directly take part in hostilities that don't fall under any of the above-mentioned categories are not combatants, nor do they get the prisoner of war or civilian protections, but they are still civilians. This loss of civilian immunity is different from those participating in a levée en masse, as civilians participating in levée en masse are considered combatants.

As a side note, besides being part of customary international law, targeting civilians is a war crime under Article 8 of the Rome Statute (ICC), which has been signed by 123 countries, which does not include Russia or Ukraine.

The varying degree of civilian participation in Ukraine has raised questions of levée en masse, but levée en masse applies to inhabitants of a territory, which firstly, has not been occupied, and secondly, it refers to civilians spontaneously taking up arms to resist invading troops, without organising themselves.

It may have been, that during the early days of Russian invasion, there were reports that several Ukrainian civilians have taken up arms by their own initiative. Some had single-handedly tried to block tanks, roads etc. However, since the Russian troops moved to major cities and the capital city of Kyiv, reports of the Ukrainian government encouraging civilians to take up arms, changes the situation. It removes the 'spontaneous' element to levée en masse. Another impediment is that, several Ukrainian regions are now 'occupied' by the Russian forces. The two-fold criteria leading to levée en masse does not hold true anymore. There may be instances of individual levées in different parts of Ukraine, but that is subject to change with the fast-paced change in facts in this situation.

Presently, most news reports point towards an organised resistance movement, where civilians are now loosely under the authority of the government/military. Since the requirement to enlist in the Territorial Defense Force has been simplified, there are now no age requirements and only an ID is needed to collect guns and get a yellow band identifying them as members of the Territorial Defense Force. This is in compliance of Article 4A(2). Ukrainian government has also lifted entry visa requirements to allow foreign war volunteers. In response, Russian defence ministry announced that the foreign mercenaries from the West cannot be considered as combatants in accordance with international humanitarian law, nor will they enjoy the status of prisoners of war. Russia threatened to have them prosecuted as criminals for acts against the Russian army.

Civilians who are directly participating in hostilities without being members of the Territorial Defense Forces, the acts that they commit will determine their situation. There are various interpretation of direct participation in hostilities, which largely depend on the facts and circumstances of the case. However, the organised masses within the fold of Territorial Defense Force and levées will still enjoy combatant status and protections if Russia succeeds in its objective, but civilians directly participating in hostilities will not.

In the last one week, Ukraine has paraded captured Russian soldiers twice. The captured Russian prisoners of war have been blindfolded and paraded in a single file before the camera, where they were shown videos of Russian destroying Ukrainian cities. Each soldier was then asked to identify themselves and condemn Russian actions.

While this may be a morale boost to Ukrainians, Kyiv is violating international norms and moral grounds. Captured combatants are prisoners of war under the Genocide Convention III and they are to be treated with dignity. This led to the International Committee of the Red Cross (ICRC) to make a statement, "Prisoners of war and detained civilians must be treated with dignity". The statement continued to say that prisoners of war are "protected against ill-treatment and exposure to public curiosity including images circulating publicly on social media".

Ukraine's defence ministry has set up a website for Russian mothers to pick up the 200 Russian prisoners of war from the Polish border, that have been captured since February 24. These figures have not been verified by ICRC.