A Court Without Lawyers ; A State Deprived Of Justice

x
A witness account of the happenings in the Jammu and Kashmir High Court.

No matter how so mighty one be, law is always above her. Or so we are taught in law school. Is this true? Does law ultimately prevail in the constant tussle between law and power? But who makes the law, who implements them and who decides when there is a conﬂicting opinion on what is the right thing to do? Realistically speaking, those in power do. However, in the long run, in a democracy...

No matter how so mighty one be, law is always above her. Or so we are taught in law school. Is this true?

Does law ultimately prevail in the constant tussle between law and power? But who makes the law, who implements them and who decides when there is a conﬂicting opinion on what is the right thing to do? Realistically speaking, those in power do. However, in the long run, in a democracy - which means 'rule of the people', it is 'the people' who have to decide 'the right thing to do'. 'The people' express their will through elections by choosing their representatives. While the elected representatives seem to derive their power from the law, they also have the power to change the law in the way they like. What then is superior - law or political power?

The question is - how does this tussle play out in the real world when applied on real world issues. The Kashmir issue, makes this question comes alive. I was intrigued to know what is happening in Jammu and Kashmir High Court, especially after the abrogation of Article 370 of the Indian Constitution. To clarify, at the beginning, it is arguable whether Art. 370 is 'abrogated' or diluted as Senior Advocate, Harish Salve recently commented that Art. 370 itself has been used to dilute Art. 370, such that all of Indian Constitution applies to Kashmir now. Without going into this speciﬁc debate, suﬃce it to say at this point, that the basic essence of Art. 370 which provides that the state of Jammu and Kashmir is free to choose what law applies to it (with some exceptions) has been taken away without any doubt. Since the Supreme Court is seized of the bunch of petitions to decide on the 'Kashmir issue', does the High Court in Srinagar continue to apply Jammu and Kashmir's Constitution and laws? Or not? Technically, the High Court will be bound by the prevailing laws unless the Supreme Court pronounces the judgment but what is happening in practice?

Beyond the application of laws, how are the courts functioning in Kashmir? With no internet, do they upload anything on the High Court website at all, how do they? How does the High court serve notices to parties when all means of communication have been snapped? How are clients approaching the High Court from distant parts of Kashmir since there are no buses plying for almost two months now, since the curfew was imposed on the valley?

These and more questions compelled me to travel to Srinagar myself to ﬁnd out answers to some of these questions, since clearly the media doesn't seem to be asking or answering these questions.

What I found is beyond what I expected. For all practical purposes, the High Court in Srinagar in my subjective opinion, seems to be a dysfunctional court. While there are seven benches in all in the High Court, only four are 'sitting' currently. The Chief Justice's Court is headed by Justice Gita Mittal who sits along with Justice Rashid Ali Dar. On 1st October 2019, the bench began hearing at around 11 am which was late by all counts as compared to the practice in other High Courts. The reason for this late start was explained by Justice Gita Mittal in the court. She said, "we start late so that all the litigants can reach the court." This was the ﬁrst hint that in Srinagar High Court, it is the litigants than the lawyers that seem to be arguing all the matters these days. What unfolded in the Court is not 'normal' by any standards. Except the government lawyers, who had to appear, there were no senior lawyers in the Court. At least 4 clients walked up to the podium themselves to explain that their lawyer wasn't present to argue the case. All that the Court could do was give the clients a subsequent date.

One woman's case was peculiar. She almost cried before the Court. Justice Gita Mittal explained to her that it was only been a week since she had approached the Court and they were trying their best to expedite the matter. There were so few people in the Court, that at some point Justice Gita Mittal, saw each person around the Court to ask if anyone else had come for hearing. Two girls, dressed in all black caught her attention. She asked them "beta, koi matter hai?" (Do you have any matter listed?) When they didn't reply spontaneously, another lawyer clariﬁed that they are law students who are there to observe and learn. To this Justice Gita Mittal replied : "Aage aa jao, aage aake baitho." (Come forward and sit). She said "No lawyers are arguing, what will you learn." (There are no lawyers here, what will you learn) (Paraphrased).

What unfolded then left everyone teary eyed. A girl of about 20 years walked upto the podium and started crying hysterically. All present were stunned. She explained that her father was taken away last year and since then she has had to take care of her 4 siblings, being the eldest. She said, I don't know where to go and whom to ask for help. Even if my father has done something wrong, please let him go. Looking at her ﬁle, Justice Gita Mittal explained that this is a year old detention case and enquired where her lawyer was, reading the lawyer's name from the ﬁle. The girl replied that the lawyer had not come. At this point, Justice Gita Mittal asked a junior lawyer in court to go and look for this girl's lawyer and clariﬁed that if he doesn't come, the Court will appoint an amicus curiae. Justice Gita Mittal clearly was at her humane best self extending compassion to the clients before her, but also seemed helpless in the absence of lawyers. Looking at this girl and hearing her plight left the law students in the room with tears and everyone else, including me stunned with silence.

These incidents are apparently everyday aﬀair in the High Court but the real question is - what is the solution? For how long can a High Court Function like this? More importantly, does the Constitution provide answers for situations like these - where the devil lies in implementation of the Constitution? 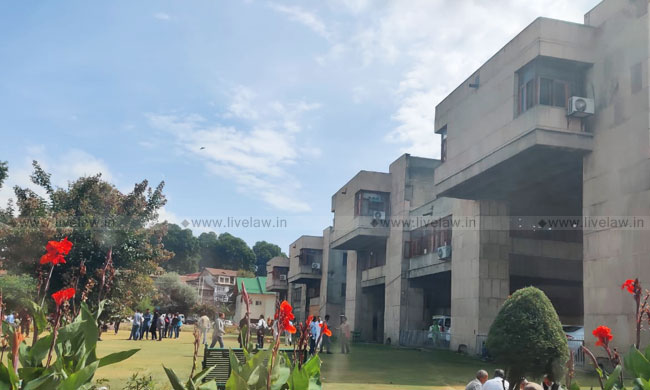 Why are lawyers not appearing - I enquired from junior lawyers present in the court. They informed me that the former President of the Jammu and Kashmir Bar Association, Nazir Ahmad Ronga, has been held in preventive detention since 9th August 2019 under the Public Safety Act (PSA). Allegedly other oﬃce bearers of the High Court Bar Association have also been held in prevention detention. This was not something I saw covered by mainstream media but found conﬁrmation in another post here. Since then lawyers have refused to appear in order to protest. On speaking to a few lawyers, who refused to be quoted, apparently some letter was issued internally, which asked (threatened) lawyers not to appear lest things look normal.

As per diﬀerent reports, upto 16,000 people have been put under preventive detention in Kashmir under PSA over a period of time. After the move to abrogate Art. 370 by the Central government, even minors as young as 9 year olds have been put under preventive detention. As one youth asked me during my visit to Kashmir : If the Indian government truly thinks Kashmir is a part of India, and have abrogated or diluted Art. 370, how can they continue to apply the Public Safety Act? Since this is a special law that applies to Kashmir, how is it justiﬁed to have the cake and eat it too? Above all, how does that justify the intention of the government in the minds and hearts of Kashmiris?

By delaying to hear the bunch of petitions, the Supreme Court has allowed room for a lot of diﬃculties in implementing rule of law. The High Court too seems to adopt a wait and watch philosophy, in times when a very proactive approach for protection of rule of law is needed to build the conﬁdence of the Kashmiri people in law itself. The youth of Kashmir asked me several questions : Why does there continue to be major delays in serving notices and confusion amongst the people about what law applies to them? If the original deal with the Kashmiris was that they could choose all the law that applies to them, except on matters of Foreign Aﬀairs, Defence and Communication, how do we now see a day, where every law of the Indian Constitution seeks to apply to them? Is it not a violation of the contract with the Kashmiri people? Especially, after the Constituent Assembly of the Jammu and Kashmir stands dissolved, can it be legal now to completely reverse the deal in the name of political interest or nationalism? Also, when there is a political turmoil in the state, what should be the role of the High Court and the judges?

All I could say was : have trust in India's Constitution. But unless its defenders step up the game, this conﬁdence seems to be waning at high speed, pointing to a bleak future where there will be nothing to pin one's hopes on.

(Author is a practicing Lawyer in the Supreme Court of India)