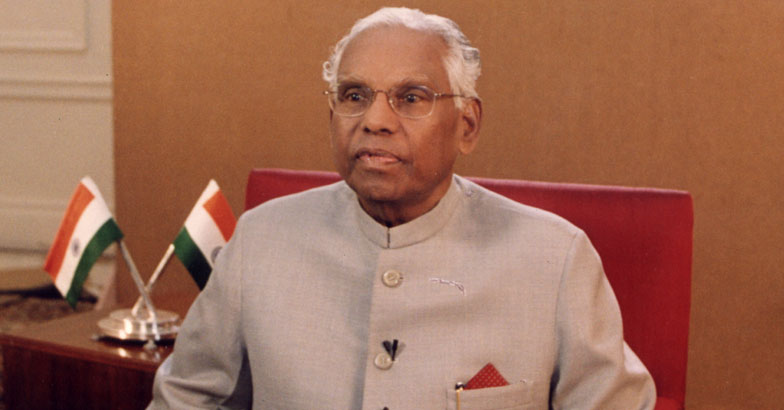 27 October marks the 100th birth anniversary of former President Mr K R Narayanan, India's first Dalit President, and a statesman par excellence. He was an outstanding scholar, a brilliant diplomat, and a great citizen who always stood for the cause of common people. He was a great defender of constitutional principles and values. As the President of India, he proved that the President...

27 October marks the 100th birth anniversary of former President Mr K R Narayanan, India's first Dalit President, and a statesman par excellence. He was an outstanding scholar, a brilliant diplomat, and a great citizen who always stood for the cause of common people. He was a great defender of constitutional principles and values. As the President of India, he proved that the President is not a rubber stamp. He became the President of India on 25 July 1997. Before that, he was the Vice-President of India. He was the first Dalit who became the President. He acted as an active constitutional President who was rightly called citizen President. His presidential tenure is known for some important constitutional developments in the country. He did not hesitate to confront the government as and when he noticed any violation of the Constitution by the government. He was born on 27 October 1920 in Kerala in a Dalit family. He received s scholarship from Tata and went to the London School of Economics for higher education. Professor Harold J. Laski had taught him in LSE. Thereafter he joined the Indian Foreign Service and served as an Ambassador in many countries. He also served as a minister in the Union Government and the Vice-Chancellor of the Jawaharlal Nehru University. He was a multi-faceted personality.

After the 44th Constitutional Amendment Act, 1978, the President is constitutionally empowered to send the advice back to the Council of Ministers for its reconsideration once but thereafter he is bound to act on the reconsidered advice of the Council of Ministers. It is the Council of Ministers which has the final say in the matter. The Council of Ministers is fully competent to accept or reject the President's remarks, comments, or suggestions. The President of India cannot impose his views on the Council of Ministers. However, the Constitution does not prescribe any time limit during which the President has to act on the ministerial advice and this lacuna provides him an opportunity to put the matter on hold for an indefinite period. In political jurisprudence, this is called a pocket veto. In 1986, the then President Zail Singh had exercised this option in the case of the Indian Post Office Amendment Bill, 1986, and prevented this Bill from becoming a law as it was alleged to have violated the privacy of the personal correspondence of the people. It is well-known that President Zail Singh had serious differences with the then Prime Minister Rajiv Gandhi on several issues including the Punjab issue. But ultimately it depends on the personality of the President and his will power to confront the Prime Minister for protecting the Constitution and public interest. Very few Presidents have shown this kind of attitude in our country. President Narayanan was one of such presidents who left an indelible imprint on the Indian presidency. He never hesitated to speak the truth to the government. Let us visit some phases of his wonderful presidential tenure.

In U.P. and Bihar matters also, President Narayanan demonstrated the influence of the highest constitutional office of the country. His presidential activism was widely appreciated in the country. In an interview with N. Ram, the then Editor of The Hindu, on 14 August 1998, President Narayanan spoke about the constitutional role of the President of India. This is what he said: "I think the President has a constitutional role to play. My image of a President before I came here, and before I had any hope of coming here, was that of a rubber-stamp President, to be frank. This is the image I got. But having come here, I find that the image is not quite correct. I thought, I will have lot of time, leisure for reading, writing, waking etc. But somehow, I find I cannot get it now. So, my image of a President is of a working President, not an executive President, but a working President, and working within the four corners of the Constitution. It gives very little direct power or influence to him to interfere in matters or affect the course of events, but there is a subtle influence of the office of the President on the executive and the other arms of the government and on the public as a whole. It is a position which has to be used with, what I should say, with a philosophy of indirect approach. There are one or two things, which you can directly do in very critical times. But otherwise, this indirect influence that you can exercise on the affairs of the state is the most important role he can play. And, he can play it successfully only if he is, his ideas and his nature of functioning are seen by the public in tune with their standards."

Notably, President Narayanan acted as a constitutional President as per the role that he mentioned in his interview. He took a strong stand two times when the Union Council of Ministers had recommended the imposition of Article 356 of the Constitution in U.P. and Bihar respectively on different occasions. He had returned the advice to the Council of Ministers for its reconsideration and was successful in convincing the government to withdraw their decisions.

(Author is practising Lawyer at the Supreme Court of India)