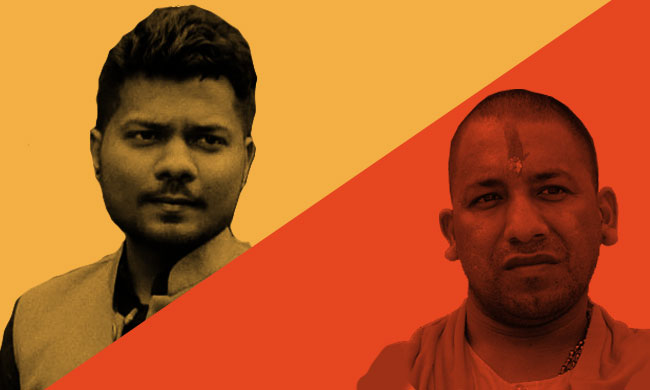 Prashant Kanojia was arrested for posting a tweet about a political personage. He did not abuse, use names, or anything of that sort. He posted a link to another story that was carried in the news about the claims of another person, about having an affair with the said personage. People were not up in arms at the suggestion. There was no public order disturbance. And yet, Prashant Kanojia...

Prashant Kanojia was arrested for posting a tweet about a political personage. He did not abuse, use names, or anything of that sort. He posted a link to another story that was carried in the news about the claims of another person, about having an affair with the said personage. People were not up in arms at the suggestion. There was no public order disturbance. And yet, Prashant Kanojia was taken into custody by the police on trumped up charges, contrary to law, some rules, and judicial guidelines as well (along with him, other persons were also arrested in connection with the same incident). Why? Because the personage also happens to be the one who, indirectly, controls the police.

For this unbelievably horrific act, the police not only kept him in custody for the 24 hours that the Constitution allows. But subsequently, he was taken before the magistrate on Sunday and remanded to eleven days in judicial custody. Not once did the magistrate seem to question the irregularities that seemed to accompany the arrest. For instance, the police invoking Sections 66 and / or 67 of the Information Technology Act 2000 when neither provision had anything do with the case. But I guess it was expected. After all, the personage also happens to be someone who, indirectly, can derail the career of the Magistrate.

Kanojia's wife is then forced to take this issue all the way up to the Supreme Court — lucky for her that she stays in New Delhi and does not have to travel too far. The country's highest court is required to intervene in a simple case of bail? And once the Court does intervene and does its job by ordering that Kanojia be released on bail because it is patently ridiculous to keep a man locked up for tweeting a news piece, we are supposed to be happy and be thanking our stars that the Supreme Court exists?

This is not the time for being happy, but for being outraged at just how pathetic the system is. And how pathetic we are for doing ever so little to change it.

Kanojia's arrest and the Supreme Court's intervention are very painful reminders of just how deep and pervasive the rot runs in our legal system. Where the executive controls the police, what else do you expect will happen if someone decides to challenge a Chief Minister? Of course it shouldn't happen, but let's not kid ourselves. And since the legislature and executive are joined at the hip in our system of government, no wonder we are happy to retain / enact broadly worded criminal laws that confer police with wide powers of arrest.

Technically, an independent judiciary should be serving as the corrective here. Magistrates can, and should, be questioning the arrest and why it was necessary. But that is a rare occurrence generally, let alone in a case involving political personages. Why? Because, again, political interference is a thing. Magistrates are working on a long-term career path that can be derailed by an adverse comment in their service record, or the evil-eye of an influential person. Can we really expect each person to be fearless and not care about making sure of food in the house? Of course not.

Which then brings me to the Supreme Court itself. Time and again, the Court is presented with cases like Kanojia's, some far worse. This was made very clear when PUCL moved the Supreme Court in January 2019 citing cases of people being arrested under the now-defunct Section 66-A of the IT Act — something that seems to have played a role even in Kanojia's case. This has led the Court to do a number of things: issue a powerful rebuke to authorities, pass guidelines regulating powers of arrest, and even go ahead and push through new legislation for insulating police from political interference. Things brings a good measure of praise for the Court, but manages to secure precious little in terms of actual change in police behavior.

Again, to expect any other outcome is foolish, as the Court does not control the police. All it can do is talk by passing orders, and threaten states with contempt in case of non-compliance. The hollowness of that threat is evident if anyone takes stock of how many states continue in contempt of the court's orders of police reforms passed way back in 2006.

What is my point here? That the outrage which we experience while hearing news about politically motivated policing and prosecution, such as the one in Kanojia's case, should not fizzle out because the Supreme Court agreed to intervene and grant bail. Keep rewinding the tape and you will find that many legislators have made promises about breaking this unholy nexus between the government and police, right from the Constituent Assembly, and even today we have not managed to make any real headway in achieving this goal. The Supreme Court is not an ever-vigilant sentinel. It cannot step in to save every Kanojia who is arrested for a tweet, or a Pehlu Khan who is lynched for practising his trade, or the many young tribal men picked up by virtue of who they are and not what they've done.

It is time that we, as participants in a democratic setup, up the ante and continually push for reforms in the criminal justice system. If governments can listen to business lobbies of a few hundreds and get working on tax reforms, they will surely have to listen to the many thousands whose lives are made worse by a criminal system which is only "just" in name and very rarely in action.

Update (12.06.2019): Further arrests have taken place in the case after the Supreme Court passed its order. Persons arrested in Karnataka on similar allegations (relating to a different political personage) have not been released on bail yet. And we are still a nation that has a Constitution.

Abhinav Sekhri is a Delhi based lawyer.