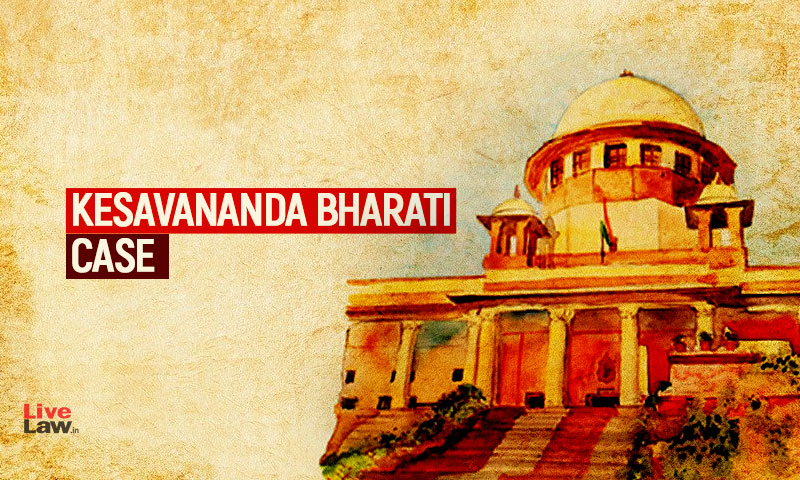 The judgment in Kesavananda Bharti v. State of Kerala [(1973) 4 SCC 225] is arguably the most important decision delivered by the Supreme Court of India. The judgment laid down that although the Parliament has the power to amend, add, modify or repeal any part of the Constitution, there are certain limits to this power. The Parliament while amending the Constitution, cannot make changes to the essential features of the Constitution. The Court termed this principle as the Basic Structure Doctrine ("Doctrine"). I have discussed the judgment in detail previously.

Scholars have often remarked that through the Basic Structure Doctrine, the Supreme Court saved the Indian democracy and put a stop to any future attempts to change the constitutional identity of India. While appreciating the judgment, one rightfully lauds the efforts of Shri. Nani Palkhivala i.e. the lawyer who argued the case and the great Justice H.R. Khanna i.e. the Judge who acted as the swing vote and ruled in favour of the Doctrine, making it a 7:6 decision in favour.

However, it might be interesting to note that the author of the Doctrine is neither Shri Palkhivala nor Justice Khanna. The doctrine is the brain child of a noted German scholar, Prof. Dietrich Conrad, whose theory of implied limitation was incorporated in India as the Basic Structure Doctrine. In the present post, I pay homage to Prof. Conrad as I discuss the origins of the Doctrine and how it came to be referred to by the Supreme Court of India in its decisions.

Conrad was a Professor at the South Asia Institute of the University of Heidelberg, Germany. The misuse of the Weimar Constitution (The Constitution governing Germany from 1919-1949) by Adolf Hitler during the Nazi Germany era had made a significant impact on Conrad. He relied on the experience of Germany during this time period, to later develop his theory of implied limitations.

Within a month of his appointment, Hitler declared an emergency and suspended the constitutional protections on civil rights i.e. the Right to Freedom of Speech and Expression, Association, Residence and Habeas Corpus. Thereafter, the legislature passed the Enabling Act which empowered the government/executive to pass legislations, in addition to the Legislature. As per the Act, the government had no obligation to comply with the procedural requirements of the Constitution while passing a legislation, whereas the Legislature had to comply with the same. The opening words of the Act read that this law is passed after fulfilling the requirements of a Constitutional Amendment.

Although the Enabling Act did not make a formal amendment to the Constitution, it left it as a dead letter. The Enabling act was thereafter used like the de facto Constitution by Hitler to pass laws that allowed him to accumulate all the powers with himself and commit mass human rights violations.

This experience taught the Germans an important lesson that mere procedural limits on the amending power were not sufficient safeguards against anti-constitutional forces as evil could be imposed by following the said procedure. Therefore, when Federal Republic of Germany was drafting its new Constitution called the Basic Law, it introduced substantive limits to the amending power by expressly designating certain parts that cannot be modified by the Parliament. Article 79(3) of the Basic Law explicitly barred any amendment to the provisions concerning the basic principles laid down in Article 1 to 20.9 which inter alia included principles of federalism, democracy, rule of law, separation of powers etc. This Clause was called the 'Eternity Clause'.

In February 1965, Prof. Conrad was invited to deliver a lecture at the Banaras Hindu University in India, wherein he spoke on the topic of 'Implied Limitation of the Amending Power'. He cited the Nazi regime and how it defaced the Weimar Constitution in its quest for power, to highlight the dangers of an easily amendable Constitution. According to Conrad, an amending body no matter how powerful cannot change the very structure, which supports its constitutional authority. In other words, an amending body (i.e. legislature) cannot change the very Constitution and its provisions that gave it the power of amendment in the first place. There exist certain implied limitations upon an amending body according to which certain areas or principles in the Constitution are beyond reach. This came to be called the Doctrine of Limitation.

Thereafter, Conrad discussed Article 368 of the Constitution of India, according to which the Parliament may amend the Constitution so long as the Amendment Bill is passed in each House by a majority of the total membership of that House present and voting. He put forth hypotheticals like whether by valid exercise of Article 368 the Parliament could amend Article 1 and divide the Union of India into Tamil Nadu and Hindustan proper? Whether it could abolish the Right to Life and Liberty under Article 21? Whether a ruling party observing a depreciation in majority Amend Article 368 to vest the entire power with the President acting on the advice of the Prime Minister? Could the amending power abolish the Constitution itself and reintroduce monarchy? The answer was a clear no, as such sweeping changes would destroy the ethos of India and turn it in a dictatorship. Therefore, Conrad argued that there was a need for implied limitations in every Constitution.

A paper was written on the theme of the lecture and Mr. M.K. Nambiar (a constitutional lawyer) came across it. Mr. Nambiar was so impressed with the doctrine and the possible questions it raised, that he relied upon it while arguing before the Supreme Court in the case of Golak Nath v. State of Punjab, (AIR 1967 SC 1643). The Court did not accept the doctrine, however the majority held that the argument had substantial force and may be revisited if a situation arises where the Parliament attempt to destroy the structure of the Constitution.

Such a situation came about in the case of Kesavananda Bharti v. State of Kerala, wherein the 24th Constitutional Amendment was challenged before the Supreme Court of India. The Amendment practically allowed the Parliament to add, modify or repeal any part of the Constitution so long as it was passed with the requisite majority. While arguing the case, Shri Nani Palkhivala cited Conrad and argued for Implied Limitations on the amending power of the Parliament. He successfully convinced the Court that there are certain basic features of the Constitution which the Parliament cannot amend. The Court called this theory, the doctrine of Basic Structure, a moniker for Conrad's Implied Limitations.

Justice Nariman in a lecture shared an interesting anecdote about the hearing in Kesavananda's case. He recalled, that Shri Palkhivala had gone to Court without any supporting judgments or case laws for his proposition on implied limitations. The only authority Mr. Palkhivala had was the article authored by Prof. Conrad. This shows both the genius of Prof. Conrad and most importantly the brilliance of Mr. Palkhivala who by his sheer advocacy was able to convince 7 out of 13 Judges with his argument.

There is a school of thought which believes that Conrad was not the inspiration behind the Doctrine. According to eminent scholar Fali S. Nariman, Justice Mudholkar had first used the phrase 'basic feature' in the case of Sajjan Singh v. State of Rajasthan (AIR 1965 SC 845). Justice Mudholkar had got the idea of a basic feature from a judgment of Chief Justice AR Coohelius of the Pakistan Supreme Court, wherein he had observed that the President of Pakistan under the 1956 Constitution though empowered to remove difficulties in the Constitution, had no power to remove a fundamental feature of the Constitution (Fazlul Quader Chowdhry v. Mohd. Abdul Haque, PLD 1963 SC 486).

This school of thought occupies the minority view on the origins of the Doctrine and the dominant view considers Prof. Conrad as the inspiration behind the Doctrine.

[The author is a lawyer practicing in New Delhi. The post was first published on his personal blog "The 'Basic' Structure".

The author does not wish to offend or disrespect any member of the legal fraternity with this post. The facts and events stated in it have been reported in the public domain. The author has relied on the following sources: 'The Judges of the Supreme Court of India (1950-1989)' by Gadbois Jr., 'God Save the Hon'ble Supreme Court' by Fali Nariman, Ashoka Thakur v. Union of India: A Divided Verdict on an Undivided Social Justice Measure by Prof. M.P. Singh, published in (2008) 1 NUJS L Rev 193 and Dietrich Conrad, Limitation of Amendment Procedures and the Constituent Power by Yaniv Roznai published in the Indian Y. Int'l Aff. 15 (1970)]