Law On Reels- 'Aakrosh' : On Women's Honour In Men's World 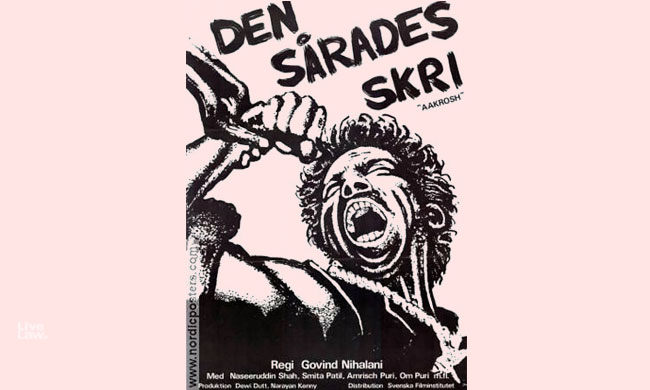 Inspired from a positivist understanding of law, 5 year based law courses teach law in an isolated manner focusing heavily on legislations and case laws. But that is rather an incomplete picture of law and its working. Critical Legal studies movement in America has shown us that law is not neutral; it works within societal structures with its own biases.[1] For example- let us take...

Inspired from a positivist understanding of law, 5 year based law courses teach law in an isolated manner focusing heavily on legislations and case laws. But that is rather an incomplete picture of law and its working. Critical Legal studies movement in America has shown us that law is not neutral; it works within societal structures with its own biases.
[1] For example- let us take feminist critique of law. Feminist legal scholars for long have argued that law is patriarchal while some scholars like Ratna Kapur have argued law to be a 'subversive site' where competing visions of the world and of women's place therein are continuously fought. [2] In essence, the point is that law does not operate in a vacuum; it is deep rooted in society and its structures, its biases. And we, as law students, should be aware of this politics of law.

In this background, a recommended film is Aakrosh which shows us the working of legal system vis-a-vis tribal community and intersection of gender. The film is yet another master piece of director-writer duo – Govind Nihalani and Vijay Tendulkar. The film has a strong cast of artists- Om Puri, Naseeruddin Shah, Smita Patil, Amrish Puri, Mohan Agashe, Nana Palshikar, Achyut Potdar among others.

Released in 1980, the movie is based on real life story of an Adivasi labourer (Lahanya Bhikhu, played by Om Puri). Lahanya has been charged for murder of his wife Nagi Bhikhu (Smita Patil) but during the entire trial, to the frustration of his lawyer Bhaskar, he remains silent. The young idealist defense lawyer, Bhaskar Kulkarni (Naseeruddin Shah) provided through legal aid machinery continuously attempts to find out the truth and asks Lahayana to speak. But Lahanya hauntingly stares into nothingness and does not utter a single word. It is this silence of Lahanya that makes you question – Has our judicial system failed marginalized section pushing them into further silence while ideally in the transformative vision of the Constitution it was supposed to do otherwise?

Ultimately, Bhaskar does find out the truth- that Nagi Bhikhu was raped and murdered by upper caste politically powerful people. Bhaskar determines strongly to get Lahanya justice, but by this time movie makes you shockingly aware of limits of this determination.

In the end, Lahanya does speak, that speech is not a word, but scream, a scream after he kills his own sister at the end. You are left wondering who is responsible for death of his sister- Lahanya himself or violence of the system (including the accomplice legal system)?
[3]Systemic Biases, Political Interference and Indian Judiciary

Lahanya has been wrongfully charged through clandestine working of system- public prosecutor, medical doctor and police. The DSP, the Public Prosecutor, local politician, the Nagar Sabhapati, the forest contractor- all have a political nexus, playing cards at the Officers' Club together discussing politics and the 'problem' that is Naxals.

Police does not present relevant blood stained piece of cloth of Nagi amongst other lacunas in the investigation. The Doctor does not conduct the post mortem up to the desired level. The Public Prosecutor (Amrish Puri) too due to political considerations fails at his duty despite knowing the truth. False witnesses are planted while actual witnesses (the father and sister of Lahanya say for example) are not presented, they remain in fear. The defense lawyer is attacked. Thus all the pillars of the legal system, operating to protect class interest of a group, wrongfully and intentionally prosecute Lahanya.
[4]Law Commission of Indian in its 277th Report has discussed the contours of wrongful prosecution in detail and has recommended legislative framework for redressal of harm caused by wrongful prosecution.

[5] However the miscarriage of justice caused by wrongful prosecution has to be read with institutional biases of our system. It is an open secret that SC/ST, minorities and other socio-economically disadvantaged groups are more targeted by our criminal justice system. They are overrepresented in the jails,[6] death penalty targets them more often. [7]

The film highlights the range of prejudices harboured by our legal system against Lahanya and his community. They are continuously prejudicially commented upon as 'excessive drinkers' by various characters in the film. These prejudices are also played into legal system by public prosecutor. The prosecutor attempts to build entire prosecution case against Lahanya by getting his character declared as 'drunk' and 'characterless' through range of planted witnesses.

The hopelessness and despair with the system is also visible in the interaction between Bhaskar and Lahanya and his family. Bhaskar continuously has to defend himself that he is not their enemy, that they can trust him, that he will not betray them, that he is not from the side of police. He goes to Lahanya's house twice but he is shown the door. "Paisa nahi h, tum jao yaha se", says Lahanya's father and tells him to leave them alone. Legal aid mechanism created in furtherance of Ar. 39A, faces such trade deficit raising systemic question as to where the system failed in bringing itself in line with 'transformative social revolutionary vision' of justice.

Further, the movie is nuanced in its understanding of interactions of Adivasis with legal system. It does not show them merely as victims while interacting with the system. The public prosecutor Dassane (Amrish Puri) too is member of an Adivasi community. He is a successful lawyer. Yet he continuously receives calls abusing, threatening and humiliating him with caste slurs.

In a patriarchal society, the honour of men and family is seen attached with women. Thus rape is seen as disruption of honour.
[8] Historically, rape of women has been used as a political tool to destroy honour of other men, other family, other community and even other nation. [9] This is also a reason why historically law has defined rape as property offence against men (say father or husband) rather than an offence against the person of a woman.[10]

The movie highlights this intersection of caste and gender in reference to legal system. In the film, Nagi is raped to teach Lahanya a lesson. Lahanya was a rebellious labourer who would not mince his words in demanding his rights and questioning the feudal lords. Thus Nagi is used as a tool to set score with Lahanya, to teach him a lesson. Similar questions may also be asked when Lahanya kills his sister at the end.

Law & Justice- Are they the same?

Are law and justice synonyms? Legal and political philosophers have debated this since times of Plato. Law sometimes can act as tool for justice and sometimes it can actually act as hurdle to justice (especially in terms of justice envisaged in Preamble i.e. social, economic and political justice in an essentially feudal society).

This is a major question which the film leaves us wondering, most especially in confrontation between Bhaskar and Dassaane (Amrish Puri, the public prosecutor) towards the end. While Dassane asserts that truth is only that has been proved through strong evidence in court but Bhaskar questions whether there is no truth beyond the four corners of courtroom, he questions what is value of self-respect and human dignity in court of law.

The movie may also make you wonder on adversarial and inquisitorial system and their respective pros and cons.

The movie is disturbingly real and carries certain timelessness with it. For anyone hoping to understand the class interest of law and its larger standing in societal structures, they should watch this movie. In the last piece we had wondered over the internalization of the transformative vision of Constitution in the police, the same question is for judiciary too. Lahanya Bhiku posed the question to judicial system in 1979, has he got his answers or there are many more Lahanya Bhikus in 2019 too?

(This is the tenth article in the "Law On Reels" series, which explores legal themes in movies)

[3] Our system has committed range of violence to oppressed castes through its institutional biased- from Mathura Rape case to decision in rape of Bhanwari Devi stand proof of the same.

[7] See- Criminal Justice : In the Shadow of Caste- National Dalit Movement of Justice