[Law On Reels] Netflix Documentary 13th : On Use Of Legal System As Tool Of Discrimination 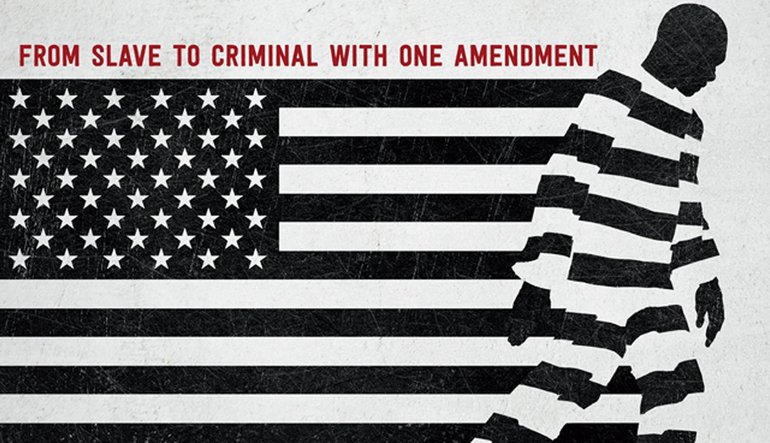 "Neither slavery nor involuntary servitude, except as a punishment for crime whereof the party shall have been duly convicted, shall exist within the United States, or any place subject to their jurisdiction." -Reads the 13th Amendment to the Constitution of the United States of America. With this amendment the Constitution of USA abolished slavery in December 1865. And yet almost...

"Neither slavery nor involuntary servitude, except as a punishment for crime whereof the party shall have been duly convicted, shall exist within the United States, or any place subject to their jurisdiction."

African Americans have faced discrimination on various fronts- in access to education, equal employment opportunities, access to economic services etc. However the focus of the documentary 13th is on use of law as tool of discrimination. The documentary highlights the active role of criminal law and criminal justice system in inventing and reinventing various new forms of oppression against African Americans in the USA.

13th is a 2016 American Documentary by Ava DuVernay, an American film maker and film distributor. An African American herself, Ava brings together interviews of range of experts and stakeholders (civil right activists, academicians, lawyers) working on race and criminal justice system of the United States of America to highlight institutionalized racism of modern penal laws of the country.

From Old Jim Crow to the New Jim Crow-

While many have argued law to be a tool of 'social engineering' and 'social change', critical involvement with law has shown us that law is not neutral, it operates within social hierarchies of caste, class, gender and race. This documentary brings race and legal system in sharp focus. The documentary highlights that the primary reason for the continuous discriminatory usages of law against African Americans is language of the 13th amendment whereby an exception has been allowed for existence of slavery in form of punishment for crime. (See the underlined partition of the text of 13th amendment). This exception has allowed continuous existence of Jim Crow legislations against African Americans in some or other form.

(Jim Crow laws refer to those laws which enforced racial segregation in USA. Based on 'separate but equal', these laws established segregation system in access to public facilities like education, transportation etc. Thus Jim Crow legislations refer to legislations furthering discrimination based on race.)

Right after abolition of slavery, an era of mass arrest of African Americans emerged where African Americans would be arrested on most minor charges (like loitering, vagrancy). Lynching, criminalizing African American civil rights activist- throughout American History the biases of system and excessive use of criminal law on supposed 'black criminality' led to massive violation of rights of the community.

But the Jim Crow has not died yet. The new Jim Crow, which continues to operate even today is 'tough on crime', 'war against drugs' rhetoric of three consecutive American Presidents- Richard Nixon, Ronald Regan and Bill Clinton since 1970's. Since 1970's African Americans have been disproportionally targeted and mass incarcerated through use of anti-drug laws. This thinly veiling rascial appeal of 'war on drugs' led to massive increase in prison population of America from 3,57,292 in 1972 to 1,179, 200 in 1990. In this prison population, African Americans are over represented than their share in the US population. Such vast is the selective targeting of this 'war on drugs' that today, every third African American men runs likelihood of imprisonment as compared to every 17th white men. These three Presidents developed language, environment and infrastructure which led to worst violation of civil liberties of African Americans.

The documentary is journey to this history from abolition of slavery to the new kind of slavery in a step-step by timeline manner. The documentary by reframing the racial history of America with criminal justice system as a central focus makes abundantly clear that law has played an indispensable role in furthering race injustice in America.

Remarkably, the documentary explains 'how' of the use of legal system in furthering institutional racism. 'How' did the criminal justice system become the New Jim Crow?- the film answers this question.

The documentary demonstrates that excessive criminalization and nature of punishments in the modern American Penal system have been the source of this institutionalized racism. As one of the interviewee says- "There are too many laws, taking too many people for too many things, giving them too harsh punishments and doing too little for rehabilitation."

The major tools used in Clinton era on this 'tough on crime' approach introduced through Federal Crime Bill, 1994 were- Mandatory minimums, the 3 strike rule, life sentence without parole, around 60 new capital offences, and solitary confinement.

Our laws continue to criminalize poverty,[2] they continue to selectively target minority communities through laws in the name of 'national security', much like America, our drug laws instead of taking drug as public health issue, it take drug abuse as a crime, targeting vulnerable groups dispropotionally, and above all, broken legal aid system and expensive bail provisions have left vulnerable sections over represented in our jails. Mandatory minimum sentences, increasing number of capital punishment offences are the patterns of modern Indian penal system too.

The biggest lesson the film left me with was this- Oppression never ends, it only reinvents itself in new forms. And law and legal system can be a tool and a source for oppression.

The documentary is a recommendation not only to understand the race and criminal justice system of America, but also to reflect upon on our own system and its violations.

(Surbhi would like to thank Mr. Anurag Bhaskar, a faculty at Jindal Global Law School, for introducing her to this documentary and fruitful discussion on it. This movie was shown in class by Mr. Bhaskar, when he was teaching a seminar course on 'Law, Social Movement and Politics' at National Law University, Delhi in Fall 2019.)

[1] This has been discussed by Prof. B.B. Pande in one his class at course titled 'Contemporary Issues in Criminal Law' undertaken by Prof. Mrinal Satish at National Law University-Delhi (August-December 2019).