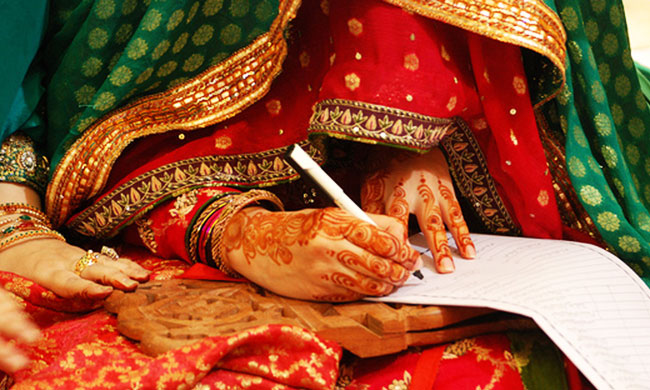 Abstract:By way of this article, the author wishes to look into the possible advantages and dis-advantages of pre-nuptial agreements, and to examine the reasons for why these agreements are considered unenforceable in Indian law and how they may conflict with the present matrimonial laws in India. In furtherance of such an analysis, the author seeks to propound a more pragmatic and broad...

WHAT IS A PRE-NUPTIAL AGREEMENT:

A Pre-Nuptial Agreement is a compendious agreement that is usually signed prior to one's marriage, describing the rights and obligations of the individuals involved in the marriage, such as, inter alia, their personal and financial rights, in the event of a future failure or breakdown of their marriage. It is often seen that matrimonial litigation, especially in proceedings for the determination of maintenance and alimony, entails a long, ugly and drawn out case between the parties. In this regard, in the event a pre-nuptial agreement is already in place, it can assist in easing the parties' time, stress, and financial resources involved.

WHY ARE PRE-NUPTIAL AGREEMENTS ILLEGAL IN INDIA:

The Courts are of the firm view that 'no person has a right to waiver of his fundamental right [2]'. In this regard, it is pertinent to consider the views of the Supreme Court of India, in "Anita Kushwaha and Ors. vs. Pushap Sudan and Ors [3], which has shed considerable light on the aspect of a 'bar on one's fundamental right to access to justice':

Thus, a construal of the above mentioned judgments suggests that a pre-nuptial agreement, which limits the right of either spouse to take recourse to provisions and remedies in law, may tantamount to a denial of access to justice, within the meaning of the aforesaid judicial pronouncements.

It has also been held that the right to receive maintenance is a statutory right framed and implemented by the legislature and that as a result, the statutory rights and liabilities under, inter alia, beneficial legislations such as Section 125 of the Code of Criminal Procedure, 1973, Section 24 of the Hindu Marriage Act, 1955, Section 20 of the Protection of Women from Domestic Violence Act, 2005 and other codified personal and secular laws in India, cannot be bartered or negated by either spouse by entering into an agreement to the contrary. Such an agreement, in addition to being against public policy, would also be against the clear intention of the legislators who framed the said beneficial statutes. Section 23 of the Indian Contracts Act, 1872 expands on this very principle, being firm on the point that any contract having an object that is illegal or contrary to law cannot be a lawful contract. Therefore, giving effect to an agreement which overrides these provisions of law would tantamount to not only giving recognition to something which is opposed to public policy, but would also amount to negation of those legislations.

THE POSSIBLE PROVISIONS OF A PRE-NUPTIAL AGREEMENT THAT MAY COME IN CONFLICT WITH THE LAW:

From a practical standpoint, there are many provisions in a typical pre-nuptial agreement that have the potential of being struck down or overruled in the event they are subject to judicial scrutiny: clauses in relation to waiver of either spouse's maintenance rights, clauses opposed to beneficial arrangements for child custody and financial support, clauses which regulate the conduct or daily routine of the spouses during the marriage, and clauses restricting children to be born out of the wedlock, among others. Basis the above rationale, there are several judicial rulings which take the view that an agreement in which the wife gives up or relinquishes her right to claim maintenance at any time in the future, is opposed to public policy, and that therefore such an agreement, even if voluntarily entered into, is not enforceable , and that an agreement by which the wife relinquishes her right to receive maintenance any time in future is contrary to public policy and consequently unenforceable

One such judicial pronouncement is that given by the High Court of Andhra Pradesh in "R. Rambilas vs. Ms. Anita and Another", wherein it has opined that:

"A clause in an agreement that wife shall not be entitled to claim maintenance from husband cannot be used in proceedings under Section 125 of Cr.P.C., since, such clause is opposed to public policy and, therefore, void under Section 23 of the Contract Act."

Further, the High Court of Gujarat, following suit, has held as under:

"3 . Many people today consider marriage solely in terms of biology, sociology or culture. When marriage and family life are viewed in a merely naturalistic manner, they lose all reference to God and are no longer rooted in the absolute values or founded upon divinely ordained truths. One result is that the premarital sex, trial marriage, and cohabitation are a commonplace today. Adultery, divorce, and remarriage are treated casually. "Pre-nuptial contracts" are becoming a popular way to take out economic insurance against a likely future divorce." [10]

Thus, while an agreement by which this statutory right of a spouse to maintenance is relinquished may not per se be illegal, it cannot be effectuated at the cost of negating the statutory rights for maintenance provided for by the makers of our legislation. Such agreements would amount to ousting of the jurisdiction of a Magistrate and the Family Courts to entertain maintenance claims, which are not permissible in law. Therefore, a claim for maintenance cannot be rejected or deemed inadmissible on the basis of an agreement for waiver of one's right to maintenance.

HOW ARE THE LAWS OF GOA ALLOWED TO ENFORCE THE VALIDITY OF PRE-NUPTIAL AGREEMENTS, THEN?

While most of the rights and legal remedies of spouses in India are derived from personal laws, which are protected under the religious freedom guaranteed vide Articles 25 to 28 of the Constitution of India. However, Goa's family laws are based on the Portuguese Civil Code of 1867 (hereinafter referred to as the "Code of 1867"). Consequentially, a prenuptial agreement for property distribution is allowed under the Portuguese Civil Code [13].

It is interesting to note that despite all legal barriers to the formation and sustenance of a pre-nuptial agreement in India as discussed above, the Code of 1867 does allow for such agreements to exist; in fact, spouses who enter into a pre-nuptial agreement prior to the solemnization of their marriage, cannot alter, modify or revoke such an agreement, or any part thereof, at a later stage. In many such aspects of personal laws, the Code of 1867 is sort of a blueprint for a future Uniform Civil Code.

After the Liberation of Goa on 19th December 1961, the Parliament of India passed the Goa, Daman and Diu Administration Act, 1962, Section 5(1) of which reads as follows: "All laws in force immediately before the appointed date in Goa, Daman and Diu or any part thereof, shall continue to be in force therein until amended or repealed by a competent legislature or other competent authority." The Family Laws in force in Goa, Daman and Diu relating to marriage, divorce, children and succession are still in force. These Family Laws are primarily contained in the Code of 1867. It is a self-contained Code containing the substantive law on the Civil side. [15] The Code of 1867 being applicable is an exception carved out of the general laws of succession namely Indian Succession Act, Hindu Succession Act, 1956, Muslim Personal Law (Shariat) Application Act, 1937 and other personal laws. [16]

THE AUTHOR'S SUGGESTIONS AND CONCLUSION:

Taking a leaf out of the Code of 1867 in this regard, the author recommends that the Courts of India adopt a more liberal approach to pre-nuptial agreements, as they possess a number of advantages which cannot be side-lined or ignored; they avoid, or at least limit the scope of, costly and time consuming litigation in the future, and facilitate the inclusion of provisions that may be unique to the situation at hand, yet are left un-addressed till date on account of the gaping lacunae in enacted legislature. Moreover, acrimonious and time consuming matrimonial litigations, into which spouses invest substantial amounts of time, energy and financial resources, can be prevented by taking recourse to a pre-nuptial agreement, where parties can disclose their respective assets in advance, as well as the manner in which they desire for the said assets to be distributed in the event of a subsequent dispute between the spouses.

Therefore, in order to consolidate these pros and cons of pre-nuptial agreements and make the best of the situation, the author suggests that the Courts must gradually shift from a rigid and contemptuous view of such agreements to a more open-minded approach to the same. Parties to a marriage ought to be allowed the liberty to frame and enter into their own, individual pre-nuptial agreements, as long as the stipulations of the same conform to the present laws and principles of maintenance in India today.

Moreover, the Courts of India can also take a suo-moto initiative, as so commendably done by the High Court of Delhi vide its judgment titled "Kusum Sharma vs. Mahinder Kumar Sharma" [17] (wherein the Court has provided a sample affidavit of income and expenditure to be adopted in matrimonial disputes), and can recommend a draft as well as propose guidelines for the framing of a basic pre-nuptial agreement in keeping with the relevant matrimonial laws.

Alternatively, it is suggested that every pre-nuptial agreement entered into between a married couple ought to be subjected to the scrutiny of the judiciary of this nation, in order to weed out legal inconsistencies in the same and to facilitate an amicable resolution of disputes and / or separation of the parties involved.

(The author is Proprietor of Delh-based firm Adab Singh Kapoor & Associates. The article was written with the research assistance of Shefali Menezes, Associate at the Firm. Views are personal)